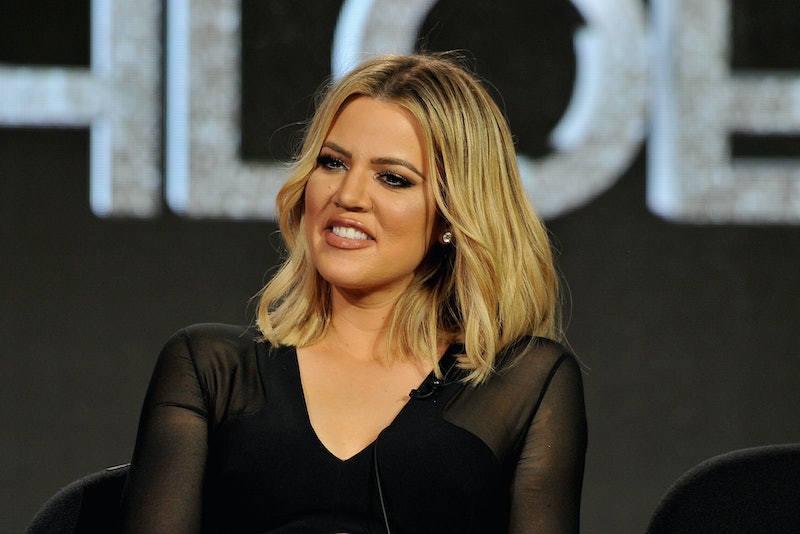 Even when they're going through hard times, the Kardashian family manages to stay strong and find the positives. Khloé Kardashian's Instagram posts about her breakup with Tristan Thompson give fans an insight into how she's handling the very public fallout from the cheating accusations surrounding the NBA star, even though she has yet to officially comment on the scandal.

Khloé and Thompson's split was officially confirmed by both E! News and Us Weekly on Feb. 19, hours after Hollywood Unlocked and TMZ claimed that Thompson reportedly cheated on Khloé with Kylie Jenner's BFF, Jordyn Woods. (Bustle previously reached out to reps for Woods, Khloé, and Thompson, but has not heard back.) And while the cheating accusations have no doubt been incredibly difficult for Khloé to weather, she posted several inspirational quotes on her Instagram Story on Feb. 23 that seem to imply that she'll be just fine without the NBA star in her life.

After sharing several throwback photos to celebrate her late father, Robert Kardashian's, birthday, Khloé posted a quote from @CommandingLife that read in part, "Everyone has a dark chapter. Make your shadows go away by shining light on yours. ... Remember clouds are always temporary. Believe it gets better." She followed that up with another screenshot, which seemed to address Thompson's cheating rumors even more directly: "We have to accept that some people are really f*cked up and it's not our job to heal them."

The Good American founder then shared a third inspirational quote, which gave fans an important insight into how she's planning to find the positive side of having to go through such a public breakup. "The most beautiful people we have known are those who have known defeat, known suffering, known struggle, known loss and have found their way out of the depths," the quote read.

Her recent Instagram Story posts are not the first time that Khloé has given an insight into her mental state after the cheating scandal on social media. After Hollywood Unlocked first shared the rumors about Thompson and Woods on their Instagram page, asking the pair to explain some things, Khloé captioned a bunch of yelling face emojis on the post. A few days later, Khloé shared three different quotes on her Instagram page, after posting a cartoon image of a woman crying. The first quote said, "the worst pain is gettin hurt by a person you explained your pain to." Another read, "Somebody needs to hear this...That betrayal was your blessing!!!"

The final quote, which seemed to be the most honest and devastating, appeared to be directed at her now-ex-boyfriend. "If they ask you about me, tell them: 'She was the only person that loved me with honesty, and I broke her,'" the quote read.

This isn't the first time that Khloé and Thompson have faced infidelity rumors and claims in the public eye. In April 2018, right before Khloé gave birth to their daughter, True, reports broke that Thompson had reportedly cheated on the reality star multiple times. (Khloé has since acknowledged those allegations on Twitter, while Thompson has never publicly commented on them; at the time, Bustle reached out to Thompson's reps regarding the rumors, but did not receive a response.)

Although the couple attempted to make their relationship work after the first cheating scandal, Khloé was still forced to relive the days after the reports first broke when episodes of Keeping Up With the Kardashians chronicling the birth of True aired in November. "Oh my God my heart is racing! So crazy how emotions never die! You may forgive but forgetting is not possible," Khloé wrote on Twitter as the episode chronicling the fallout from the first cheating scandal aired.

The new mother also took the opportunity to explain why she decided to have Thompson in the hospital with her as she gave birth to baby True in a series of tweets. "I wanted to have a beautiful birthing experience for myself and for the memories of what I choose to share with True when she’s older," Khloé wrote, adding in a follow up tweet that "I chose to put my feelings aside for the birth and to try and have as much positive energy that I could," during True's birth.

While it must be difficult for Khloé to endure reports of Thompson's rumored infidelity once more — as well as a very public breakup — it's clear that no matter what happens, as long as she has baby True to focus on, she'll be just fine.