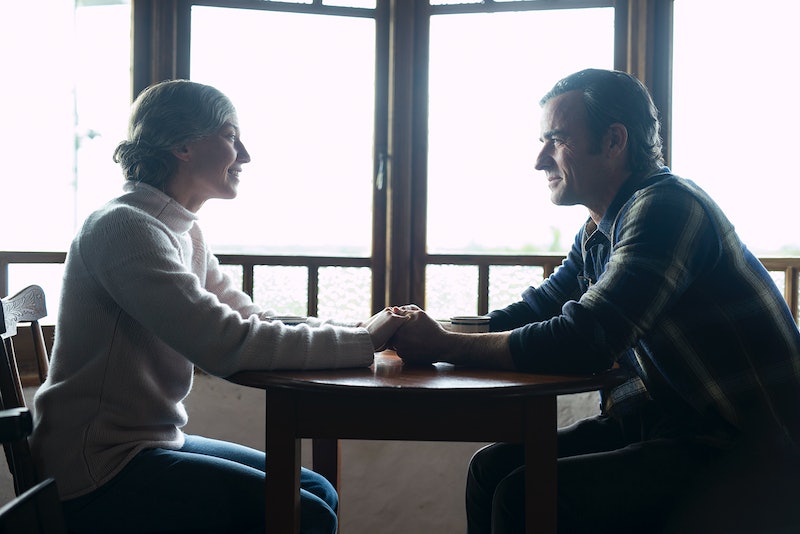 Ever since the Season 3 premiere of The Leftovers ended with a flashforward, viewers have known that the series would have to catch up with that older version of Nora at some point. But what they perhaps didn't realize was that almost the entire series finale of The Leftovers — a full hour of runtime following a brief prologue about Nora going through the LADR device — would take place in that future timeline… and that the entire history of the show would boil down to the resolution of the relationship between Kevin Garvey and Nora Durst. But co-creator Tom Perrotta doesn't think that this particular turn of events should have been particularly unexpected for those who have been following the show from the beginning.

"I don't think fans should be surprised," Perrotta tells Bustle. "If you look at the finales of Season 1 and Season 2 in relation to Season 3, they all involve Kevin and Nora. The first one is sort of a new family being formed; the second one has this large-scale sense of community, that Kevin is the center of this web of an extended family that is the entire show; and obviously in the last one, we kind of narrowed it down to the two of them."

According to Perrotta (who also wrote the 2011 novel as well), he and co-showrunner Damon Lindelof crafted the entire final season so that it would naturally and gradually telescope down to focus on the relationship at the show's core. "If you look at the season as a whole, there's a kind of process of leave-taking, a process of goodbyes, that started right at the beginning of Episode 1 so that in a sense, Kevin and Nora are the last two characters left standing. They're the ones who are in the midst of an ongoing drama that the story needs to follow. Everyone else, we kind of left them at a moment of peace, where they've come through all of their journeys to a kind of a truth, and only Kevin and Nora were still in motion."

Fans might not have realized they had seen the last of most of the show's characters before the finale even began. In fact, the only member of the central cast other than Kevin and Nora who even appears in the episode is Laurie, who apparently didn't commit suicide after all and is the only person who has been in touch with Nora since her experience with the device. But viewers did get updates on almost everyone: Matt had passed away from cancer after moving from Jarden back to Mapleton to be with his wife and son; Michael had taken over Matt's church in Jarden (which no one was calling "Miracle" anymore); Laurie and John were still married and living next door to Kevin; Kevin, Sr. was still alive and kicking in his old age; Jill had graduated college and started a family; and Tommy had landed on his feet after a short-lived marriage.

Perrotta isn't without his regrets that the shortened final season meant he and Lindelof had to sacrifice the screen time of certain characters in order to give proper weight to the relationship between Kevin and Nora. "If I look at the show over three years, I feel like there was maybe more to tell about Jill," he muses. "She was a big character in the book," in which she's one of four point-of-view characters along with her father Kevin, her mother Laurie, and her brother Tommy. "Margaret [Qualley] was amazing whenever she was onscreen," Perrotta effuses about Jill's portrayer. "In terms of this season, I would have loved to have seen more John Murphy. I think Kevin Carroll has emerged as just such a wonderful force in the show, and I wish we could've had an hour devoted to him."

When it comes to Kevin and Nora's happily-ever-after, Perrotta is careful not to oversell the optimism of their long-awaited reunion. "I think this show hasn't offered us a lot of hope on that front," he says of their often rocky relationship. "They need each other, they understand each other, but they obviously don't do all that well when they are together." Still, he's not going to leave fans with nothing to cling to.

"On the other hand, I think the finale shows two people who have evolved quite a bit from who they were 15 or 20 years before, whatever that time frame is," Perrotta explains. "Kevin certainly no longer seems at all interested in a realm outside of the earthly realm. He seems like a man who has been burdened by the passage of time, but he's softer and wiser. Whatever he's gone through, he's gone through it before he arrives in Nora's town. But she goes through something [during the finale] — I think we see her change a little bit and soften a little bit and move towards a place where she could maybe try to find a way to love him."

Perrotta says "it's going to be up to the viewer" to decide if they think Kevin and Nora finally find a way to make it work. Personally, he says, "I think the love between them is real. But whether there's a happily-ever-after there in the world that they live in, I don't know."

In true Leftovers fashion, concrete answers remain maddeningly elusive all the way to the bitter(sweet) end.