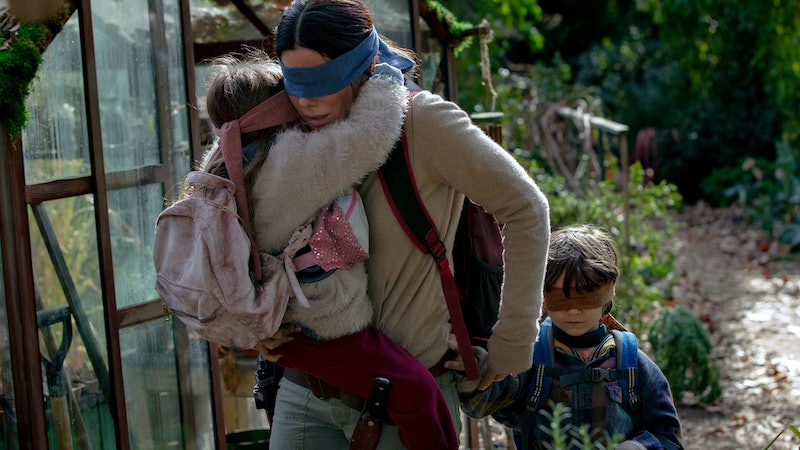 In an interview with Bloody Disgusting, the film's screenwriter, Eric Heisserer revealed that there was a scene where Sandra Bullock's character, Malorie, actually comes face to face with the mysterious creature that has been terrorizing her, and driving the other characters to their violent, bloody deaths. "There was a time when one of the producers was like, 'No, you have to see something at some point' and forced me to write essentially a nightmare sequence where Malorie experiences one in that house," Heisserer said.

But according to Bullock, once she saw the creature in person, it was nothing that she could have expected: "It was a green man with a horrific baby face."

"It was snake-like, and I was like, 'I don’t want to see it when it first happens. Just bring it into the room. We’ll shoot the scene,'" the Oscar winner explained. "I turn and he’s like this [growling at me.] It’s making me laugh. It was just a long fat baby."

If a long, fat, green-faced snake baby sounds hilarious to you, you're not alone. Director Susanne Bier revealed that Bullock kept laughing when she had to film the scene where she saw the creature for the first time. "It so easily becomes funny. We actually shot that and spent a lot of energy on [it], but every time I saw it, I was like this is not going to be tense," Bier explained. "It’s just going to be funny."

She continued, "At first, Sandy was like, 'I don’t want to see it' because she thought it was scary. Then it was like, 'Don’t show it to me because [I’ll laugh].' Every time I did it, I was like, 'Sh*t, that’s a different film.'"

Ultimately, though, Bier thought that it made more sense not to show the creature onscreen, explaining, "whatever those beings are, they tap into your deepest fear. Everybody’s deepest fear is going to be different from the other person. I think to suddenly take upon a concrete shape in order to illustrate that becomes weak."

She added, "Where the conceit is really strong, then trying to illustrate it is kind of almost meaningless. So it would have been the wrong decision."

It seems as if Bier made the right decision in the end: Bird Box became a social media favorite very soon after its release on Dec. 21, resulting in a combination of tweets explaining how terrified viewers were and a serious of shockingly hilarious memes.

But the film's real success comes from Bier's ability to make the audience feel the ominous, claustrophobic world that Malorie was attempting to navigate in order to keep herself and her kids alive. "Because it’s so much Malorie’s story, because [the film] plays so much with the whole notion of ‘she can’t see,’ I thought it was really important to stay with her emotionally and to understand what it is she’s not seeing," the director told Bustle.

Part of that effect comes from the sound design of the film, which gives the audience the sense of being surrounded, but with no sense of depth or space, just like Malorie feels when she's attempting to walk around blindfolded. "The whole use of sound is... it’s incredibly important. And very much carries a huge part of the emotional storytelling," Bier explained. "Having creatures which are mainly composed of invisible things puts a big pressure on the sound to be very distinct. The creatures mess with your mind, and they play into your deepest fear, so the sound had to be suggestive of that."

Clearly, with all of that terrifying, layered sound design adding a sense of terror and confusion, there was no need for audiences to see the creature in order to understand how horrifying its presence is.