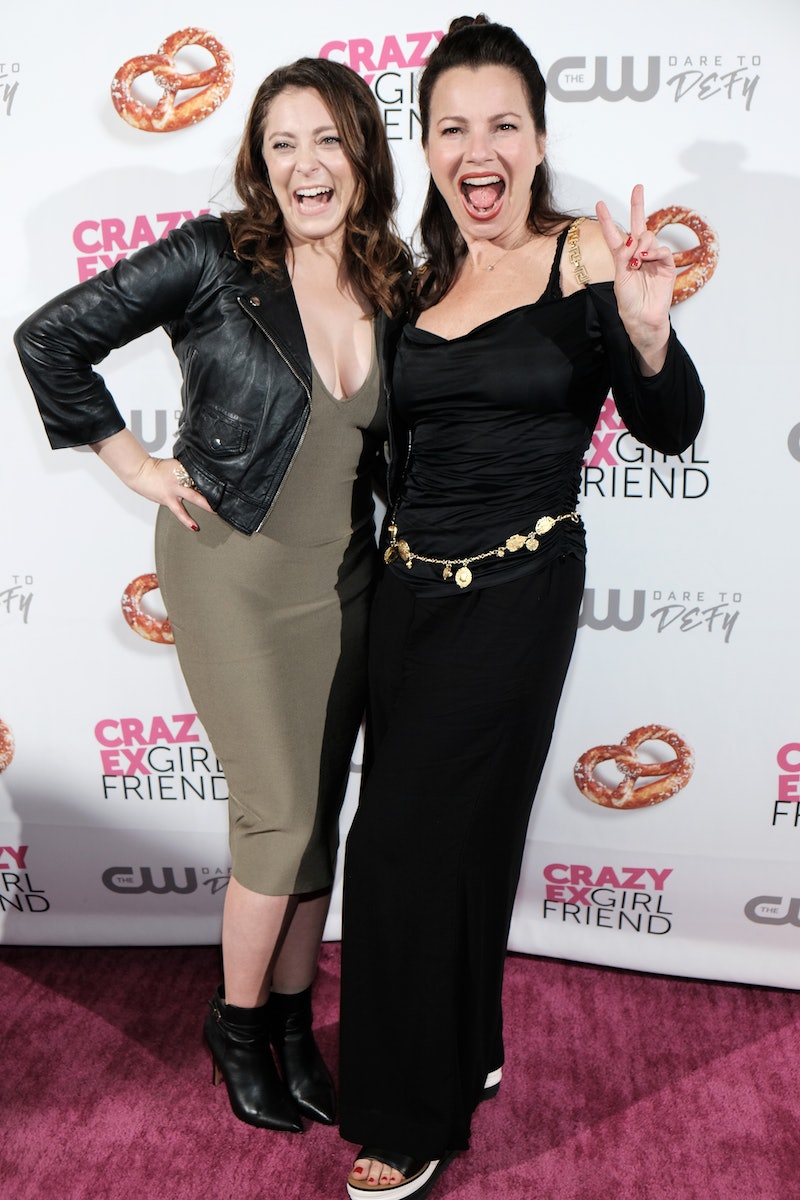 Throw on some leopard print and celebrate, because Fran Drescher is developing a Nanny musical for Broadway. The New York Times reported on Wednesday, Jan. 8, that the multifaceted talent who starred in the '90s sitcom of the same name is writing the musical with her ex-husband, and creator of The Nanny, Peter Marc Jacobson. If that news isn't exciting enough, Rachel Bloom from Crazy Ex-Girlfriend is working side-by-side with Drescher to help write the original music. On Jan. 8, Bloom tweeted her excitement that she "can finally talk about this!"

Bloom and Adam Schlesinger, Crazy Ex-Girlfriend's executive music producer, will co-write the music and lyrics for the Broadway show. Bloom and Schlesinger won an Emmy in 2019 for outstanding original music and lyrics for The CW series, so they know a thing or two when it comes to crafting music for a project. Dear Evan Hansen and Mean Girls' Broadway producers Scott and Brian Zeilinger have also joined the team, along with Marc Bruni from Beautiful: The Carole King Musical, who will serve as director.

The Times also reported that there isn't a current production schedule. As for the cast, no one is attached to the musical, including Drescher. Sorry, fans, she's not going to reprise the leading role of Fran Fine on stage. At least, not yet.

In April of 2019, Drescher teased she and Bloom were working on a secret project together. During an interview with Michael Yo on his SiriusXM Radio show, the icon dished about a potential Nanny reboot. "Truth be told, I'm not developing that as a television series right now," she said, "but I am working on something that I think the Nanny fans are going to be very excited about." At the time, she wouldn't reveal any details, but did say that she was working with Bloom. And, lest you think this partnership came out of nowhere, the two have actually been friends for a while. In October 2018, Drescher tweeted a photo with Bloom calling her "my bestie," all while praising Crazy Ex-Girlfriend.

As for that highly-discussed Nanny reboot possibly starring Cardi B, there still isn't any word on whether or not it will come to fruition. But, in September of 2019, Drescher told Entertainment Tonight she had met with the rapper's people.

For awhile now, Drescher has been hinting at an exciting Nanny announcement. In June 2018 she told ET, "We're working on a very big project. It's going to be very exciting for the fans, but I'm not at liberty to announce it yet. But it's gonna be big." Last September, Drescher also told ET they were "still negotiating one last important contract" regarding the secret project. Nothing has been confirmed, but there's a chance Drescher was referring to the musical. It certainly is pretty "big."

More like this
Man Meets Politics: ‘Boy Meets World’ Star Ben Savage Is Running For Congress
By Jake Viswanath
Hilary Duff's Husband Matthew Koma Has Her Name Tattooed On His Butt
By Jake Viswanath and Stephanie Downs
The Jonas Brothers' New Album Has A Very Meta Name
By Alyssa Lapid
The Spice Girls Are Set To Reunite At King Charles III’s Coronation
By Sam Ramsden
Get Even More From Bustle — Sign Up For The Newsletter
From hair trends to relationship advice, our daily newsletter has everything you need to sound like a person who’s on TikTok, even if you aren’t.