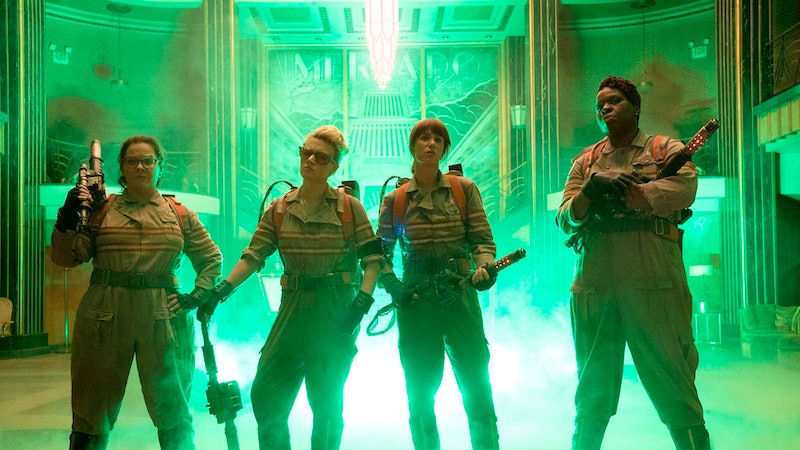 In a quest to prove that moviegoers truly aren't afraid of no ghost, director Jason Reitman will co-write and direct a new Ghostbusters movie. According to Entertainment Weekly, the new film will be set in the same universe as the 1980s comedy classics and act as a follow-up to Ghostbusters 2, which hit theaters in 1989, and not, as one might have hoped, a sequel to the 2016 reboot. In fact, this new film could mean the end of the all female Ghostbusters for good.

“This is the next chapter in the original franchise," Reitman — the son of Ivan Reitman, who directed the first two Ghostbusters films starring Bill Murray and Dan Aykroyd — told EW. "It is not a reboot. What happened in the ‘80s happened in the ‘80s, and this is set in the present day." In other words, the movie will represent a "passing of the torch" from the original characters to a new group of paranormal investigators.

As a result, the upcoming Ghostbusters movie will essentially ignore the 2016 all-female reboot, which starred Melissa McCarthy, Kristen Wiig, Leslie Jones, and Kate McKinnon. Reitman did, however, tell EW that the Paul Feig-directed comedy is still a part of the general Ghostbusters universe, but that it would have no bearing on his upcoming project. "I have so much respect for what Paul created with those brilliant actresses, and would love to see more stories from them. However, this new movie will follow the trajectory of the original film," Reitman said.

Noting that the all-female reboot is still technically a part of the larger Ghostbusters universe is a nice attempt to show that the film is still very much a part of the franchise. However, even if Reitman and Sony's intention isn't to erase the all-female film, the decision to abandon one series for another is a signal that the powers that be are, essentially, not interested in continuing with the reboot.

The studio is so committed to Reitman's new addition to the franchise, they even released a teaser trailer on Wednesday, Jan. 16, just one day after the original announcement. The teaser, a sign that this movie has been in the works for quite some time, as well as the revealed summer 2020 release date, is just more proof of the studio's intentions to launch a brand new series.

It's true that the 2016 Ghostbusters earned mixed reviews from critics, and, yes, it was a box office disappointment (making only $229 million worldwide on a reported $144 million budget, per Box Office Mojo). But it's also true that the reboot never really got a fair shot. Many fans of the original franchise slammed the idea of four woman fighting ghosts in New York City as a "gimmick" to appeal to audiences or part of Sony's quest to "ruin" their childhoods. The cast had to deal with a huge sexist backlash and a negative campaign against the film that resulted in the trailer becoming the most disliked video on YouTube in April 2016.

That said, by abandoning the reboot for an entirely new Ghostbusters series, the studio seems to be reiterating the idea that a female-centric reboot or a female-led comedy are "risks" and that if they don't over-perform, there's no point in continuing to make more female-focused films. Despite the fact that movies with a female character in a leading role have been proven to make more money at the box office than those with men in the lead, Sony is making it seem like if one female-led comedy fails, Hollywood will hesitate to green light more of them.

This move isn't exactly unexpected. After Ghostbusters' underwhelming box office take, Aykroyd claimed that the film's "underperformance" meant that it was unlikely that any kind of sequel to the all-female reboot would ever happen. "Paul Feig made a good movie and had a superb cast and plenty of money to do it," the SNL alum told The Hollywood Reporter. "It cost everyone as it is unlikely Kristen, Leslie, Melissa and Kate will ever reprise their roles as Ghostbusters which is sad." But even though many saw this pivot coming, it's still disappointing.

The female Ghostbusters was an entertaining, funny story that managed to overcome the negative press that surrounded it from the very first moment it was announced, and it proved itself to be a worthy addition to the franchise. And instead of taking the chance to build on that, or to expand that universe even more, the studio simply decided to backtrack to the original films, and declare the all-female version null and void.

This Reitman-directed sequel might simply be an attempt to recapture the nostalgia that fans hold for the original films, but, in essence, it tells all of the trolls who complained about the 2016 film that they were right to cause a stink — and undermines all of the work that the cast and crew did to pay homage to the Ghostbusters franchise and to fight to make it a little more inclusive. As this new Ghostbusters sequel moves forward, it's a sad reminder that in today's Hollywood, many women still aren't given the credit, or second chances, they deserve.