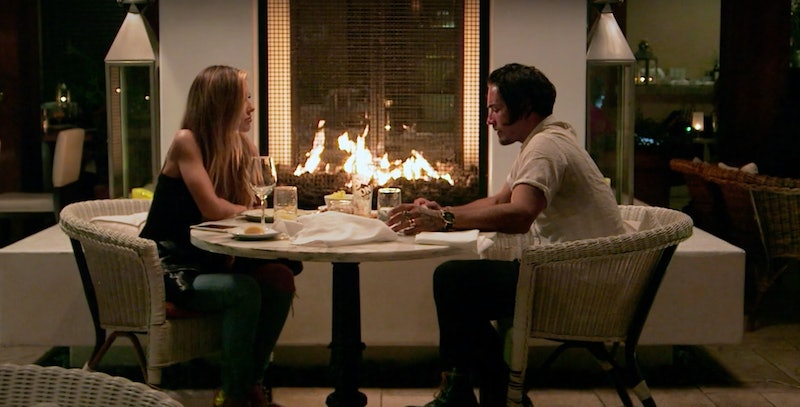 The anticipation for The Hills reboot could not be any higher. However, there are still so many unanswered questions. There hasn't even been much new footage. Well, until now that is — the new Hills: New Beginnings teaser, released on Monday, emphasizes there’s going to be plenty of drama. New cast member Brandon Lee actually declared that there's "never a dull moment in The Hills" at the tail end of the video. And by all accounts, it seems like his assessment is spot-on.

First, you have the relationships (and potential relationship) drama. Audrina Patridge and Justin Bobby Brescia, who had a tumultuous on-again-off-again relationship during the show's original run, are shown on what appears to be a dinner date. In a clip, Audrina tells Justin, "I don't even know where to start." Then he tells her, "With you and I, I think it's just getting started."

Even after many years, Justin Bobby still comes through with the one-liners. Will "I think it's just getting started" become the second coming of his famous "truth and time tells all" remark? Or does he have even more meme material up his sleeve?

The trailer also shows Brody Jenner with his wife Kaitlynn Carter Jenner, who he was not dating at the time of the original series. Will they be the show's golden couple? Or will they bring the drama, too?

Even if the Jenners don't bring the drama, at least there's Stephanie Pratt. At one point in the teaser, she yells at someone, "Welcome to adulthood!" Ouch. Who could that dig be aimed at? Audrina tells someone in the video (although it's unclear who she's referring to), "You're literally insane."

The teaser's narrator tells the viewers to "release your inhibitions every Monday night," which is obviously a play on the lyrics to the show's theme song "Unwritten."

Weirdly enough, the show's most infamous duo — Heidi Montag and Spencer Pratt, also known as "Speidi" — was not featured in any of the episode footage. Yes, they're shown in promotional shots from the beginning, but not in any of the action teased in the clips.

Could this mean that Speidi isn't the impetus behind any of the drama? During a June 10 interview with Us Weekly, Spencer was asked to name the cast member who "gets into the biggest, most heated arguments." He didn't actually say anyone's name, but it sure seemed like Spencer was alluding to his sister Stephanie.

He remarked, "I don’t want to say it because all of a sudden there’ll be a whole podcast about me." Spencer seemed to be referring to an April episode of the Pratt Cast podcast. Stephanie opened up about her drama with Spencer and Heidi during a very candid discussion with co-host Wells Adams.

During the podcast, she declared, "We are not on speaking terms. I do not consider them my family." (Bustle reached out to Spencer and Heidi's rep for comment on Stephanie's claims, but did not receive a response at the time.)

Spencer told Us Weekly in June,

"I don’t think it’ll take too long to figure that one out, real quick. … But I don’t want to name, names because I don’t want anymore lies spread abut me. I have enough in my Google alert."

Well, at least the Pratt siblings agree on one thing: Stephanie gets into a lot of arguments with fellow cast members. In a June interview with Entertainment Tonight, Stephanie explained she might be the villain on the reboot:

"Straight up, I've been living in London and everyone is no bullsh*t. It’s not like LA. In London, when you have a problem, you go up to that person and you don’t just like allow bullsh*t and lies and you call people out. So I do that a lot. So I might be the villain. I mean, I fight with a lot of people."

No matter who the actual "villain" is, it seems like Brandon was spot on when he declared that there's "never a dull moment." Is it June 24 yet? Fans need to see the first episode ASAP.

More like this
What Is 'Pretty Wild' Star Tess Taylor Up To Now?
By Morgan Leigh Davies
How To Stream 'Pretty Wild'
By Arya Roshanian
Here's The Full List Of Zach's Confirmed & Potential 'Bachelor' Contestants
By Kadin Burnett and Grace Wehniainen
Clayton & Susie Broke Up, Citing "A Significant Amount Of Pain" After 'The Bachelor'
By Jordyn Tilchen
Get Even More From Bustle — Sign Up For The Newsletter