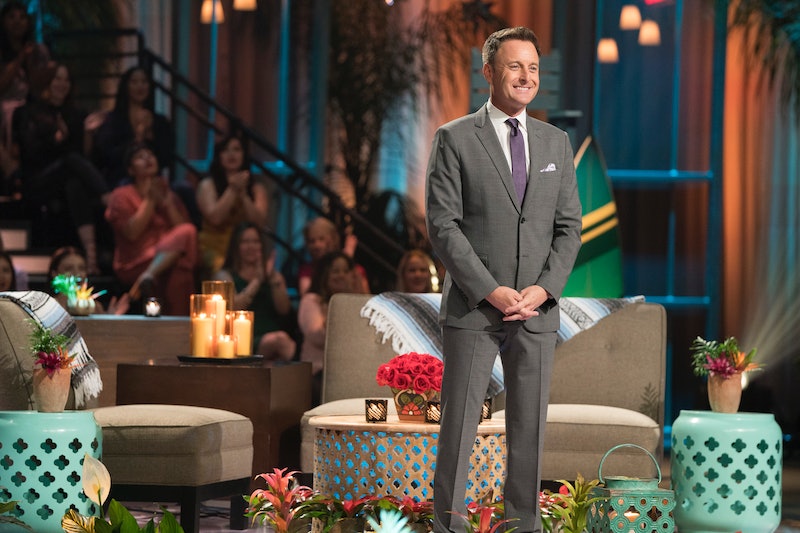 For twenty-something seasons, The Bachelor has peddled love to millions of Americans, convincing them that if you “put yourself out there” and “remain open to the process,” love can find you. Especially when cameras and producers can find you 24/7, too. Suffice it to say that said process doesn’t always work, but we like it anyway. Well, a lot more than "like." The evolution of The Bachelor from random reality show into a full-blown franchise has been a gradual process, but there’s one old Bachelor season where the winds seemed to shift — and it’s the season you should catch up on, whether you're new to Bachelor Nation or a longtime fan.

Way back in 2014, 33-year-old Chris Soules was plucked from obscurity (or Iowa) and cast in Andi Dorfman’s season of The Bachelorette. He didn’t win Andi’s heart, but he did win the approval of millions of Bachelor Nation fans, and it was down to Soules and Arie Luyendyk, Jr., to be the 19th ever Bachelor back in 2015. (Arie ended up helming the 22nd season of The Bachelor and making Bachelor history on his own.)

Soules was an easy choice for the next Bachelor back then, because he was a corn-fed, farm-raised American man, and he was also very attractive. What more does an American audience need? Soules was our very own Prince Farming. Soules himself is honestly neither here nor there — he didn’t always seem comfortable in front of the camera or on the dates (Carly’s tantra date with him is still particularly scarring), but it’s the group of women chosen for Chris’ season that sets the season apart.

Becca Tilley. Ashley Iaconetti. Jade Tolbert (née Roper). Kaitlyn Bristowe. Carly Waddell. Mackenzie Deonigi. Samantha Steffen. Ashley Salter. Recognize those names? If you’re a Bachelor fan, you know them all, and even if you’re not, you definitely have seen a meme somewhere on the Internet of Ashley Iaconetti crying dark, inky mascara tears.

Soules’ season offered the biggest and possibly first group of cast members who knew how to parlay their Bachelor connections into better things, and most importantly, the cash to go along with it. Bristowe went on to become a Bachelorette in her own right, and she, despite recently splitting with ex-fiancé Shawn Booth, is a frequent face in Bachelor Nation. Iaconetti has been on multiple iterations of Bachelor spinoffs, including The Bachelor Winter Games and several seasons of Bachelor In Paradise. Now, she’s getting married to Jared Haibon, and you can bet your bottom dollar that wedding will be on television.

Roper and Waddell became besties and appeared on Bachelor In Paradise together, where they met their respective husbands. Roper and husband Tanner Tolbert netted more than a million bucks in endorsements and sponsored content in their first year together, as per Us Weekly. Deonigi, Steffen, Salter, and Tilley showed up on Bachelor In Paradise at least once more to try out their luck in love or, really, get their faces back on camera and into the pop culture zeitgeist. It's not a bad gig if you can handle the evening gowns.

The women of Soules’ season are not the first repeaters in the franchise, but they are among the first to get good at making money off of it on social media. They’re good at the hustle. It was a distinct shift in the way The Bachelor works — social media, especially Instagram, was finally huge enough to monetize the instant followers that one gets from being on a show like The Bachelor or The Bachelorette. If you found love on the show, great, but if you found an Instagram army? That’s better.

Capitalizing on those 15 minutes suddenly became important in terms of growing your bank account and collecting endorsement deals for teeth whiteners, meal plan boxes, hair vitamins, and laxative teas, among others.

Soules’ season was pretty unremarkable in terms of drama and locales. Tilley was a virgin, Roper had posed in Playboy, and Iaconetti and Kelsey Poe had a very dramatic two-on-one date. The show also barely left the country, probably on account of Soules’ Americana persona. A season like that would barely register on the Richter scale of today's dramatic Bachelor editing. Soules eventually chose nurse Whitney Bischoff as his bride (they broke up), but perhaps the joke was on him — the women of his season have had more longevity and success than anyone suspected, and all because he let them go.