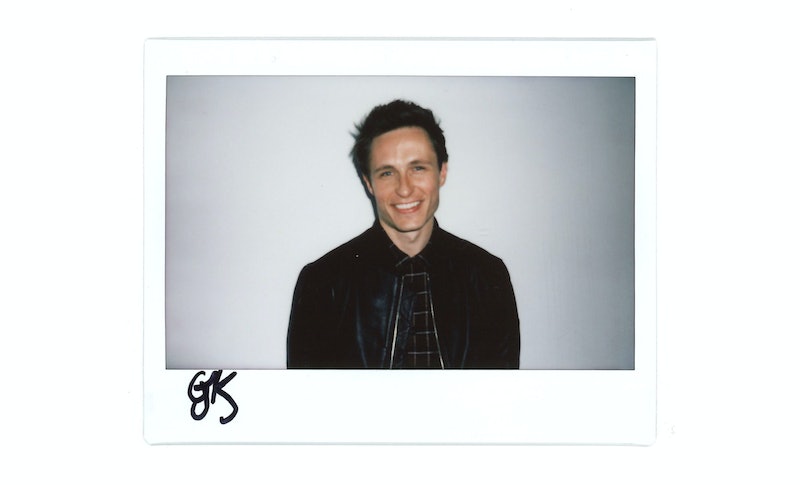 When celebrities hang out with Bustle editors, we want to give them the chance to leave their mark. Literally. So we hand them a pen, a piece of paper, a few questions, and ask them to get creative. The rest is up to them. This time, The Perfectionists star Graeme Thomas King is leaving his mark in the Bustle Booth.

Yes, Graeme Thomas King is well aware he has a famous doppelgänger — an Oscar winner, in fact. The Perfectionists star easily rattles off instances where he was mistaken for Eddie Redmayne, including getting shouted at on a New York City street, having a reporter accidentally start interviewing him after an award show, and strangers coming up to him at parties.

"I think the drunker people get, the more they're like, 'Can we have a photo? I loved you in Harry Potter,'" King says, referencing Redmayne's role in the Fantastic Beasts series. "You’ve got to laugh at these things,” he adds, eating an apple (which he politely asked if it was OK to do beforehand because of the crunching) in the Bustle offices. "I’m just waiting for the day in which he gets compared to me."

Given the way King is already making a splash on The Perfectionists, that's entirely possible. But Hollywood wasn't always his plan, and he sort of fell into acting in a happenstance way. Sitting on the top deck of an empty London bus, a woman approached and asked him if he was an actor who would be interested in auditioning for her short film. At the time, he was intent on working in finance, but wound up agreeing to audition because she was "dead keen" on it. "I mean, I did a lot of acting work in finance, pretending I knew what I was doing. I do a lot of acting now, pretending I know what I'm doing," he jokes.

He tells the story lightly, but there's a more serious reason he decided to take a chance and give acting a shot. His mother was battling cancer around that same time, and in between taking care of her and working a finance job that he admittedly didn't "really care about," he decided to make a major life change, lest he have any regrets when he gets older. He also wanted to make his parents proud.

So, King bought a book on Amazon about acting techniques (as one does), applied to a six-week program in the Big Apple, and eventually landed his first major role in the Pretty Little Liars spinoff. (His mom, by the way, is thankfully doing better now health-wise.)

Of course, the power of the PLL fandom is not lost on him. "It became very evident how big a universe it was and how the fans were such a huge part of the show," King says. "It's nice and it's intimidating at the same time."

"He's got so many secrets," King teases of his ever-mysterious character Jeremy. "What he does, who he does it for, and why is incredibly complicated, so you have to keep watching." The best is seriously yet to come, as King hints that the table read for the sixth episode was a game-changing moment for the cast, where everything started to fall into place. He says, "I remember everyone was going, 'This is it!'"

Luckily, King teased a little more in his Bustle Booth answers below.