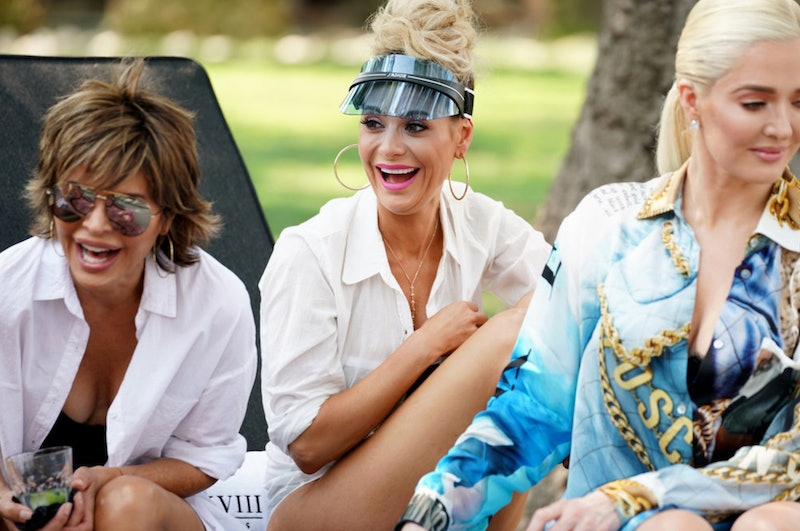 In Beverly Hills, the Real Housewives taglines are an enigma wrapped in diamonds and rosé. On Monday, Entertainment Tonight shared The Real Housewives of Beverly Hills Season 9 taglines that will greet us at the top of every new episode, and not a moment too soon. This year’s batch of RHOBH zingers has everything you could want and more: a very Rinna pun, allusions to fame and fortune, a humble request to all backstabbers, and, of course, a shoutout to the 90210.

Suffice to say, there is a lot of buzz surrounding this show's return. But before we get to Tuesday evening's wildly anticipated premiere, here are some taglines to keep our ravenous appetites at bay.

Rinna’s tagline sure owns it, baby.

“Most People Talk About Their Fantasies. I’m Living Mine.” — Erika Jayne

“In Business And In Life, I Wear Many Hats… And Hairstyles.” — Dorit Kemsley

Oooh, it sounds like we’re in for another season of fantastic talking head looks from Dorit.

“You Can Stab Me In The Back, But Whilst You’re There, Kiss My A**.” — Lisa Vanderpump

“I’m Not Afraid Of Hard Work, But I’ll Never Do Your Dirty Work.” — Teddi Mellencamp Arroyave

The accountability coach is here to hold us accountable for our metaphorical and literal trash.

“My Problem With The Tabloids? My Real Life Is So Much Juicier.” — Denise Richards

More juice, you say? Let the cup runneth over. It's a terrific source of vitamins and scuttlebutt.

“In Beverly Hills, The Truth Always Has A Way Of Rising To The Top.” — Kyle Richards

A Kyle Richards tagline that doesn’t take a moment to highlight her hometown just doesn’t feel right. (You need look no further than the taglines she gave us in Seasons 5 and 7.) So glad Season 9’s keeping this grand tradition alive.

In the game of Real Housewives, it's taglines take all.