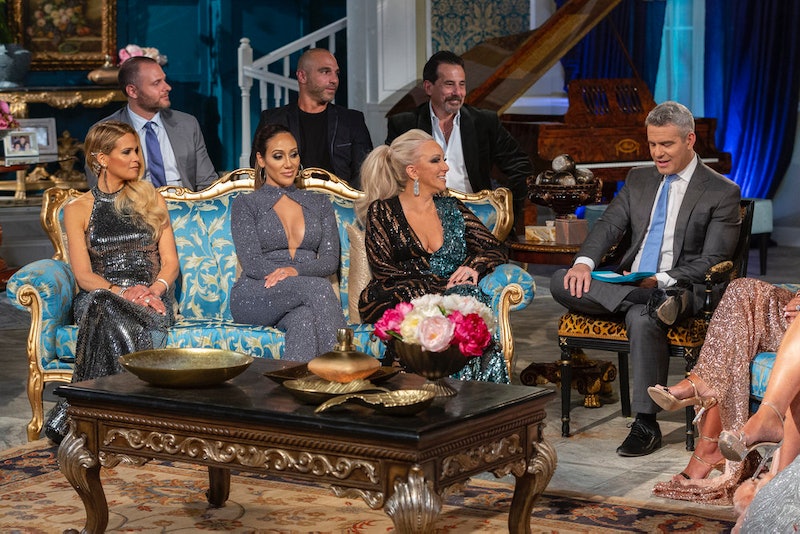 A Real Housewife's tagline is crucial. These short phrases set the tone for the season and give the fans a hint about what to expect from the cast members. Plus, these phrases can be perfect slogans for merchandise and GIFs. But what about the husbands? The RHONJ husbands shared taglines during Part 3 of the Season 9 reunion. and the results were...well, they were something.

Before the guys shared their hypothetical taglines, reunion host Andy Cohen said, "We have never in the thirteen years of the Real Housewives asked the husbands this. So, I can't wait to find out what you think." And it's about time, especially after this season, where it felt like a sideshow was going on with all the husband drama. (Or the husband's inserting themselves into the drama.)

If only Danielle Staub's ex-husband Marty Caffrey was on that stage, right? There are plenty of clever things he could say about getting pushed into a pool or ending a short-lived marriage. Too soon?

Even with Marty's (logical) absence, Joe Gorga, Joe Benigno, Frank Catania, Evan Goldschneider, and Bill Aydin all came through with some fitting taglines to represent their time on the show. And just like the ladies' taglines, not all taglines are created equal. Some of the men hit us with some clever quotations and others were just cringeworthy.

So without further ado, here is a ranking of the New Jersey guys' taglines from worst to most plausible. And just in case you're not used to their foul language, be forewarned that some of them are X-rated.