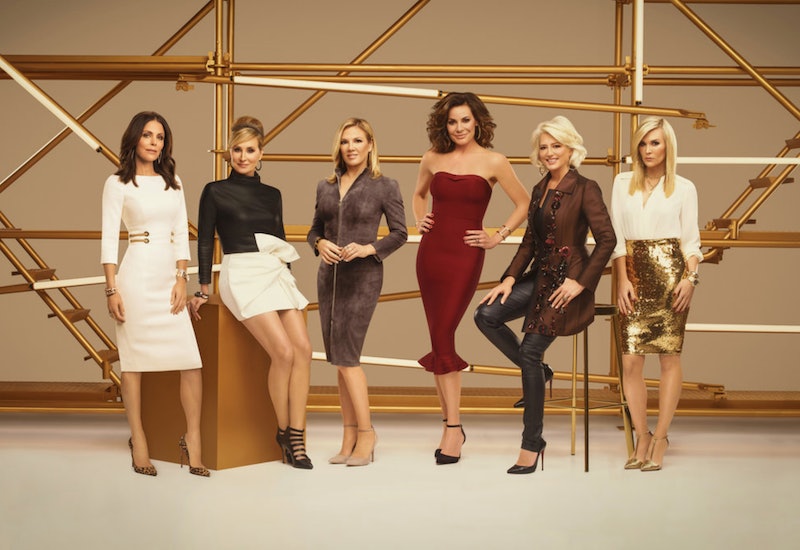 Watch out, Bravo fans, because this Valentine’s Day, Cupid is not firing arrows. This year, the the god of love has loaded up his bow with something much sharper: The Real Housewives of New York City Season 11 taglines. (And yes, as a matter of fact he did decide to wear Jovani today. A special occasion calls for a special garment, and ol' Cupid wanted to make it nice.) On Thursday, Feb. 14, E! Online shared the opening credits sequence for the eleventh chapter in the modern-day masterpiece that is RHONY. The show's return is so close, I can almost smell it. Or maybe that's something burning in my old toaster oven? Hard to say.

Yeah, some of the taglines may veer on over to standard-issue Real Housewives tagline territory, but there are a few that really stopped me in my tracks. Let's dig into all six of 'em.

“The Only Thing I’ll Settle For Is More.” — Ramona Singer

Ramona? More like Ra-more-na, am I right, ladies and germs?

Ah, we've got a tennis-themed reference to Tinz’s relationship status (Coupon King, we hardly knew ye). I totally forgot about this (or *gasp* I never knew about this, and if that’s the case, feel free to revoke my Bravo fandom membership), but once upon a time, Tinz was a nationally ranked tennis player. The more you know!

“If You’ve Got A Problem With Me, It’s Your Problem!” — Dorinda Medley

I’ll tell you this much, I wouldn’t want to accidentally cut this tagline off on the freeway.

“When Life Gives Me Limes, I Make Margaritas.” — Bethenny Frankel

This nod to her Skinnygirl empire is also a reference to everything Bethenny's endured since Season 10 wrapped: Her on-off boyfriend Dennis Shields died in August, her long-running custody battle with ex-husband Jason Hoppy has continued down the same nasty path, and she ended up in the hospital after experiencing a severe allergic reaction to fish at the end of last year. Oof, wishing Bethenny nothing but the best.

“I Plead Guilty… To Being Fabulous.” —Luann de Lesseps

Oh, Lu. Lu, Lu, Lu. Only you could take legal issues and spin it into tagline gold.

“People Call Me Over The Top, But Lately I Prefer Being A Bottom.” — Sonja Morgan

And on that note, RHONY returns on March 6. Start planning your toaster oven-focused menu for the premiere now.