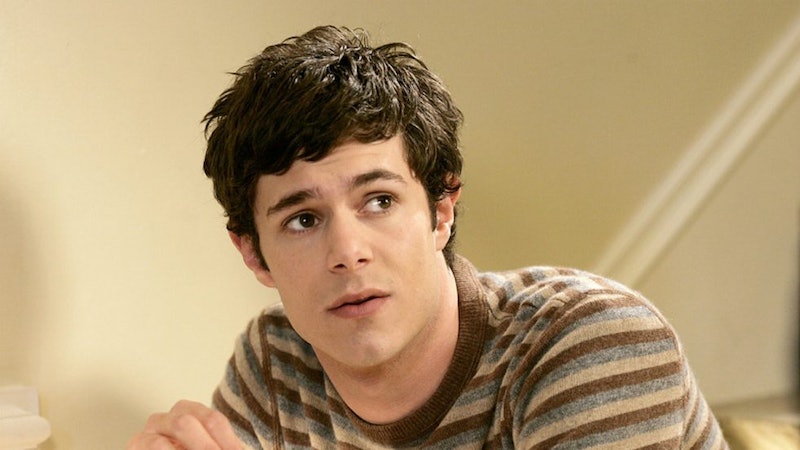 When it comes to The O.C., there are so many incredible episodes that should be revisited immediately. And, as characters go, Adam Brody's Seth Cohen is completely unforgettable, totally adorable, and responsible for some of the most incredible quotes ever broadcast on TV. So which Seth Cohen episode of The O.C. should his true fans appreciate more than they already do? There are several front-runners, including the one in Season 4 when Seth proposed to Summer with the eyeball ring. But the episode that fans of Brody's character need to re-watch right now is "The Heartbreak" from Season 1.

It's important for several reasons, and most of them involve Seth. In particular, it's his reaction to losing his virginity that is pivotal to the plot and will ignite all of the emotions at once inside of your tiny heart. In addition to receiving the most embarrassing sex advice ever from his dad, Sandy Cohen, Seth openly admits to Ryan that his first time wasn't great. It's so refreshing to hear a male teen character like Seth recall his first time in such a brutally honest way, with zero attempt to lie or play up his own performance. If you didn't love Seth Cohen already, you definitely will after watching "The Heartbreak."

For starters, Sandy's sex talk is hilarious, because it's hugely unhelpful. Following a question regarding protection, Sandy skirts around the idea, much to the chagrin of Seth, who clearly wants to hide under a rock for a million years. However, when Seth remarks that his first time was awkward, his dad is actually reassuring and tells him that's to be expected. Phew.

This scene is so endearing for hardcore Seth Cohen fans, because it highlights the character's naiveté and proves that he's got such a great heart. The way that Seth looks genuinely perplexed when his father mentions foreplay will have you screaming with laughter, because, well, we've all been there. The conversation ends with Seth thanking his dad, clearly grateful for the advice, but that doesn't stop him claiming that he threw up in his mouth a little bit during the talk. And Seth's incredible performance in this episode doesn't end there.

When talking to Ryan about the escapade, Seth stumbles upon the weirdest analogy for what happened. Instead of bragging to his peers, Seth is completely self-deprecating and super concerned that he did a terrible job. And if you needed any further proof that Seth is the most hilarious guy of all time, his conversation with Ryan only gets funnier:

I did make some faces in the middle that I wish that I could take back, but I can't, and there's also sort of a whiny noise that came out towards the end that wasn't my finest hour. I sucked so bad! I was like a fish, flopping around on dry land. Ryan, I was Nemo, and I just wanted to go home.

Seth feels completely out of his depth having had sex for the first time, which is so relatable. He has no idea whether his partner enjoyed it or not, but, from his description of events, it sounds like she didn't. Plus, instead of lying to save face, Seth's self-criticism is brutal, which is actually refreshing. And his respect for Summer is no more evident than when he says, "I think Summer's used to driving a higher performance vehicle." He's respectful of her past relationships and doesn't want to disappoint her. He completely bucks all stereotypes.

Upon finding out that Summer was a virgin, too, when they had sex, Seth is surprised, but more respectful than ever. Calmly, the couple decide that they rushed into the physical side of their relationship and that they should've taken time to enjoy themselves. In a totally classy move, Seth asks Summer, "What if we were to slow it down a little bit?" He then proceeds to play Ryan Adams' "Wonderwall" cover, asking Summer to dance. She calls Seth "cheesy," but the couple's awesome communication skills prove how great they are together.

Clearly, this is the perfect episode to watch when you want to appreciate The O.C.'s funniest character. Get ready to goofy grin, Seth fans.