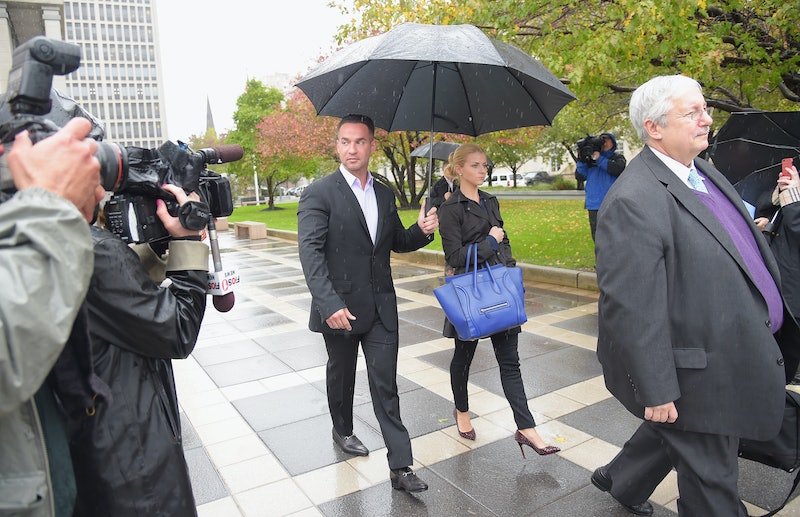 Mike Sorrentino’s sentencing has been determined, and The Situation’s lawyer has released a statement focusing on what’s ahead for the Jersey Shore star. As outlets such as People and E! News reported on Friday, Oct. 5, Sorrentino has been sentenced to eight months in prison for tax evasion. According to People, the reality TV personality will also be required to complete 500 hours of community service, plus pay a $10,000 fine in addition to the restitution he has already paid.

Late on Friday, Sorrentino posted photos from the sentencing on Instagram, accompanied by the following caption:

We are very happy to put this behind us. Thank you So much for all the Love & Support 🙏🏻

Earlier on Friday, Sorrentino’s attorney, Henry Klingeman, said in a statement to Bustle,

“Michael accepts the Court’s judgment. He is looking forward to marrying his college sweetheart, Lauren Pesce, next month, and moving forward together after he serves his sentence.”

As Klingeman’s statement indicates, Sorrentino and his fiancée plan to wed before he begins his prison sentence. Sorrentino and Pesce got engaged on Valentine's Day while filming the first season of Jersey Shore Family Vacation, and the couple shared the happy news with Us Weekly on April 26. The Situation told the publication,

“I have always dreamed of proposing on Jersey Shore, the show that introduced me to the world. I’m currently living the dream and proposed to my college sweetheart, Lauren Pesce, amongst my best friends on the biggest reality show in the country. We are so proud and excited to share this chapter of our story with the world."

Sorrentino and Pesce have been prepping for their nuptials over the last few months, and the affianced pair is ready to take the next step sooner rather than later. Polizzi discussed The Situation's upcoming wedding on SiriusXM’s The Jenny McCarthy Show on Thursday. She said, “He’s actually planning the wedding now and we’re super excited.” She added that both her daughter and Farley’s daughter will act as flower girls.

In January, Mike and his brother Marc Sorrentino pleaded guilty to violating tax law. The Sorrentino brothers were first indicted in 2014, and then received additional charges in 2017. As People reported on Friday, Oct. 5, Marc Sorrentino was sentenced to two years in prison.

When he pleaded guilty in January, Mike Sorrentino’s attorney said in a statement to Us Weekly,

“Today, Michael Sorrentino has come to terms with mistakes he made at a very different and tumultuous time in his life. He deeply regrets his failure to pay his taxes, and has spent the past several years turning his life into something positive. He has been sober for two years, counseled other young people facing life’s stresses, and has built a stable, loving relationship with his girlfriend Lauren Pesce, who stands by his side. The plea terms call for a balance between punishing the wrong committed and conditions that facilitate Mike living a productive, law-abiding life moving forward. Following through on this plea agreement, Michael intends to pay restitution before sentencing.”

And after Friday's sentencing, it sounds like Sorrentino plans to continue moving forward as best he can.