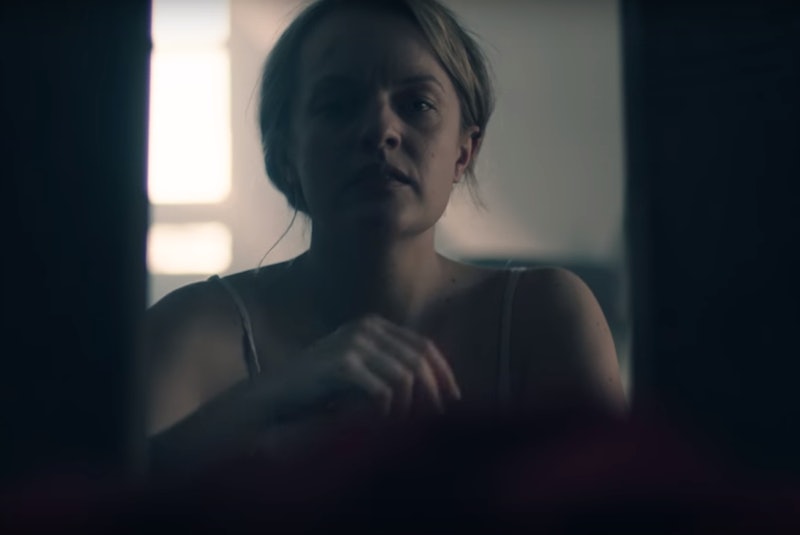 There's a resistance brewing in Gilead, and June is on the front lines in the Season 2 trailer for The Handmaid's Tale. According to TV Line, the Emmy and Golden Globe-winning series will kick off its second season on Wednesday, April 25. If the trailer is any indication, viewers are in for an uprising as the power imbalance in Gilead begins to slowly shift. This new day is evidenced by the song in The Handmaid's Tale Season 2 trailer — a haunting rendition of Buffalo Springfield's "(Stop, Hey What's That Sound) For What It's Worth" by Malia J.

"(Stop, Hey What's That Sound) For What It's Worth" is one of the most famous protest songs of all-time. Rolling Stone reported that it's been played some 8 million times on TV and radio since its 1966 release, according to the song's publishing house. Originally written in response to the protests surrounding the Los Angeles police's attempt to impose a curfew on young music fans, "For What It's Worth" quickly became an anthem for Vietnam War protesters. Since then, the song's timeless lyrics have made it an enduring classic for every era — including a dystopian future where women are enslaved by powerful men to bear their children.

At the end of Season 1, June discovered she was pregnant and was then promptly hauled away by a van that either carried Eyes or people who could spirit her away from the hell she faced at the hands of Fred and Serena Joy. Her fate is still uncertain in the trailer — in one scene she's muzzled, but in another June burns her handmaid's robe. No matter where she ends up, the truth is June won't truly be free until Gilead falls, and while the Republic isn't as stable as it once was, the handmaids and their supporters have a long way to go before they bring that corrupt society to its knees.

The trailer establishes that Season 2 will take viewers beyond the claustrophobic confines of Gilead and out into the world that exists outside of its borders. Moira escaped to Canada in the season finale, and the teaser offers glimpses of her new life. It also seems that while Janine avoided being stoned, she may have been sent to the work camps instead. One thing is certain, the handmaids will likely pay a severe price for their act of rebellion, but now that they've seen what standing together can accomplish, their desire to resist seems destined to grow.

In terms of resonance, these lyrics from "For What It's Worth" feel like they encapsulate how the characters on both sides of Gilead are feeling as their unease grows in Season 2:

Into your life it will creep

It starts when you're always afraid

You step out of line, the men come and take you away"

From the eerie shot of the handmaidens looking down on the men of Gilead to the chilling scene of them being herded through a dark tunnel, the tension on both sides is palpable. There's more than enough paranoia to go around, and it's important to remember that paranoia breeds fear. And June seems more than ready to strike fear in the hearts of Fred and his cohorts.

According to TV Line, the official description for Season 2 reads,

"The 13-episode second season will be shaped by Offred’s pregnancy and her ongoing fight to free her future child from the dystopian horrors of Gilead. "Gilead is within you" is a favorite saying of Aunt Lydia. In Season 2, Offred and all characters will fight against — or succumb to — this dark truth."

It sounds like the resistance is in full swing now, and all that's left is to start the countdown until the Season 2 premiere arrives in all of its protest-fueled glory.

More like this
The 'P-Valley' Season 2 Trailer Teases A Major Shakeup At The Pynk
By Johnny Brayson
Grey's Anatomy Fans Refuse To Accept Kaimelia's Shocking Relationship Update
By Brad Witter
Yes, Billboard Queen Angelyne Really Ran For Governor Of California
By Brad Witter
'Who Killed Sara?' Won’t Return For Season 4
By Brad Witter
Get Even More From Bustle — Sign Up For The Newsletter