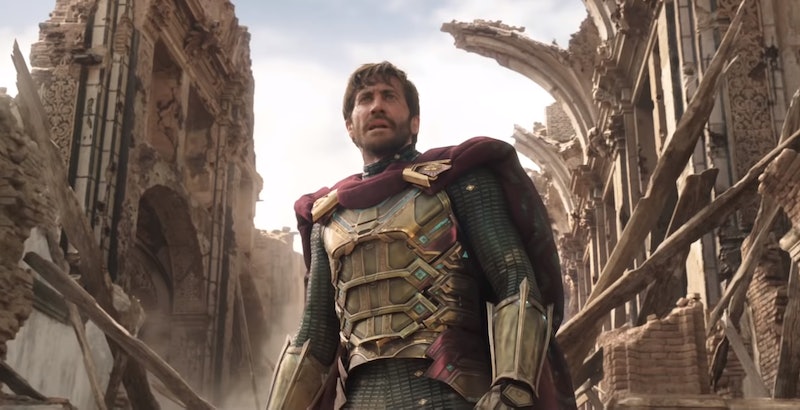 Are your spidey-senses tingling? That could be because there's something unexpected in the latest details about Peter Parker's European vacation. A new report from Entertainment Weekly suggests that Mysterio may not be Spider-Man: Far From Home's villain after all. Which is kind of a big deal since Jake Gyllenhaal's character is known for being one of the web slinger's nemeses in the comics.

According to EW, Nick Fury will actually introduce Mysterio to Peter as an ally. That means the SHIELD agent at least thinks that he's on their side, and it's not often that Fury is wrong about people. The movie's director, Jon Watts, takes things a step further by describing magician Quentin Beck (the man behind Mysterio) as another strong male influence in Peter's life. "If Tony Stark was sort of the mentor in the previous films, we thought it would be interesting to play Mysterio as almost like the cool uncle," he explained to the publication.

So if Mysterio and Spider-Man are going to be palling around — at least initially — then who will be ruining Peter's European vacation with evil-doing? Per EW, he and Mysterio will team up to defeat a dangerous quartet known as the Elementals, a group that can manipulate nature to do their bidding. In the comics, the Elementals consist of Hellfire (who can generate flames), Hydron (who controls water), Magnum (he manipulates rocks and minerals), and the only female member of the group, Zephyr (she controls air).

The Elementals are no joke. At one point in the comics, they're defeated by Captain Marvel — and she's proven she doesn't go after just any old villains. But there's still something a bit fishy about the idea that Mysterio and Spider-Man will be fighting side by side against them.

In the trailer, Happy makes a point to tell Peter that he's on his own, and the general theme of Far From Home seems to be about the young hero embracing his role as a leader. Watts told EW, "Peter's ready for a vacation at the beginning of this movie, to say the least. This film is about the world telling him, 'It's time for you to step up and grow up, kid,' and he's saying, 'But I still want to be a kid and go on vacation.'"

Since the movie is set after Endgame, there's a good chance Peter will still be trying to process the events of that movie. It's easy to imagine him seeing Mysterio as someone he can confide in and learn from, but the movie may be plotting a twist where the character of Quentin Beck is concerned. Spider-Man could learn the hard way that he can't trust every cool, super smart man who comes into his life as a mentor. Instead, he's going to have to learn how to trust his own instincts, just like Happy advises.

Or maybe the director's going in a different direction entirely, because one surefire way to subvert people's expectations is to make Mysterio an actual good guy. Fans will just have to wait until the movie's July 5 release date to find out whether Gyllenhaal's character is really Spider-Man's friend, or if there's more to the story than Watts is letting on.