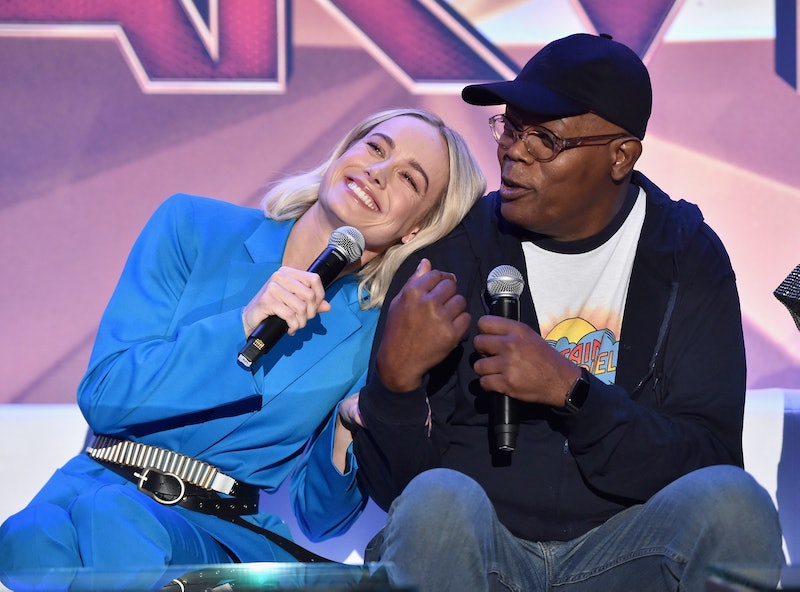 After things began to, uh, fall apart at the end of Avengers: Infinity War, the question of how Captain Marvel knows Nick Fury within the Marvel Cinematic Universe really struck moviegoers. What was clear to those who stayed to watch Infinity War's post-credits scene — in which Samuel L. Jackson's Fury paged Captain Marvel AKA Carol Danvers (Brie Larson) — however, was that they must have a deep history. And, indeed, they do. As those who have also since seen Captain Marvel now know, Fury and Captain Marvel go all the way back to the mid-'90s.

Without giving away too much of the movie's plot, in Captain Marvel, Danvers (who, at the time, of course, didn't know she was Danvers) first caught the attention of Fury and fellow S.H.I.E.L.D. agents Coulson (Clark Gregg), after not-so-subtly crash-landing into a Blockbuster Video. Given that Captain Marvel took place in the '90s, fans got to know a very different, much less jaded, side of Fury as he and Danvers began their friendship.

"During the course of interacting with her, they do become compatriots," Jackson told Screen Rant earlier this year. "They have a shared sense of humor. He's open to the difference in what she may be and what she may not be. And he's definitely willing to help her explore what she needs to find out to find out who she is and what and how she came to be."

Naturally, that journey turns into a Skrull-battling quest to save mankind — and the beginning of a beautiful kinship. Given Fury and Danvers' past history, it's not a huge stretch that, more than two decades later, Fury sent an S.O.S. call to perhaps the only hero who can defeat Thanos now.

That being said, the introduction of Captain Marvel led many MCU fans to wonder, however, what took Fury so long to summon her? Plenty of other disasters have taken place, after all. "She said only in emergencies," Jackson explained of his hesitance to call upon Captain Marvel, in an interview with IGN. As the actor continued:

"Other emergencies could be handled by the people who were present. It’s just an alien invasion, that’s something that could be handled. Half the population wasn’t dying and flicking off and doing whatever. We finally have an emergency that I feel warrants her presence. This is unprecedented. How are you gonna fight that? I can’t fight that. If I’m not here, I need to find someone to come here who can handle it. All those people are ineffective. They’re great for normal, everyday world disaster. But intergalactic badass who has all the Infinity Stones needs a bit more."

Captain Marvel's co-director Anna Boden had a similar theory. "He's not gonna bring it up unless, like, it's something he really can't handle because he doesn't want to, you know, let other people know about her existence," she theorized to IGN. "That could be a bigger security threat."

With Avengers: Endgame's premiere on the horizon, fans anticipate seeing exactly why Fury summoned his old pal. And with Captain Marvel on the scenes, chances are Thanos' days are numbered. Here's hoping, anyway.