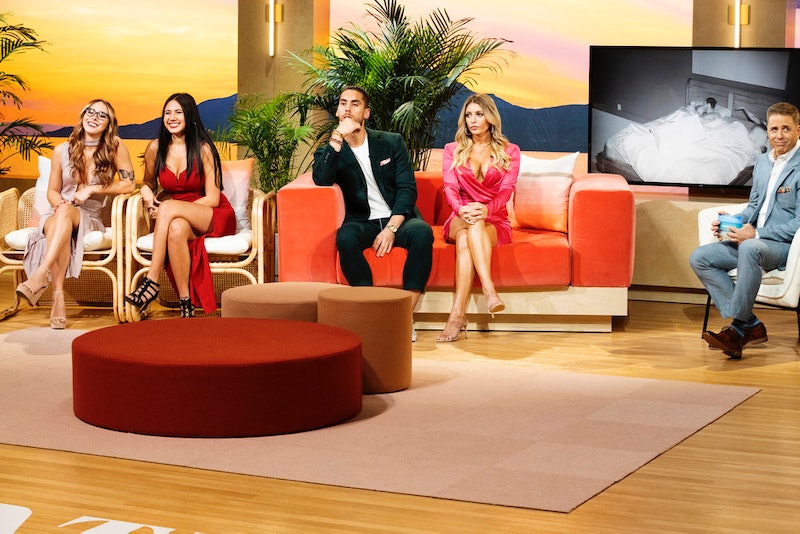 Six months is all it took for everything to change. The Temptation Island reunion, which was filmed in November, per Us Weekly, was rife with chaotic screaming matches and hot takes about relationships. Somehow, between the yelling, the cast managed to squeeze in some life and dating updates. And it's clear that none of them are on the same boat they left the island in.

As of the reunion, this is where everyone stands.

David And Kate Are Trying To Make It Work

Sam said she recognized his balcony in one of Kate's Instagram photos, and told her why. "I've been there," she said. "And we also stayed the night together." This was news to Kate, who said she's still in love with David. He denied all of Sam's claims, and Kate left the stage in tears.

Kate and Dom kept in touch after the show, but she broke his heart by ghosting him to try and work things out with David.

After leaving the island with Kareem, Esonica returned home to talk things over with Gavin, who was upset by her time alone with Kareem on the show. He felt betrayed. Kareem confirmed that he and Esonica are not a couple, but said he would continue to support her as a friend. She left the show before taping ended.

Despite their storybook romance on the island, Ashley and Ben are no longer together. According to Ashley, they dated for "like two days" after leaving, and he broke up with her. Ben said they ended things after she returned home where she hooked up with Casey. Ashley denied hooking up with him but said they did kiss. Casey didn't attend the reunion.

Rick And Medinah Are Kind Of Together?

Ashley and Rick made it clear from the reunion's start that they're no longer together after leaving the island as a couple. They didn't explain why, but Rick did say they make better friends than lovers. On the flip side, he and Medinah talk every day, and he said he "wouldn't be opposed" to a romantic relationship with her. They kissed during a break from filming.

They've had a month to continue figuring things out, and now that the reunion is over, who knows where these people will end up down the line.