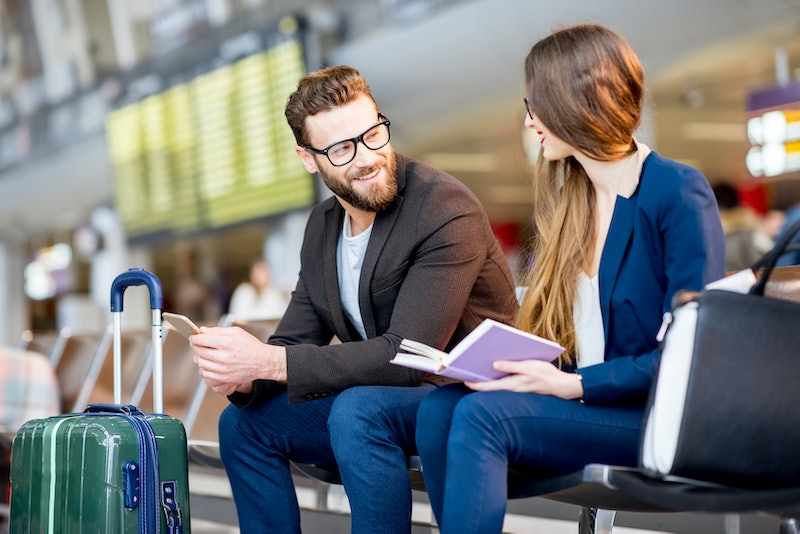 As the holidays approach, it usually means one thing: airport travel. The good news? Match discovered the top airports for meeting singles, because love is in the air, or very well could be if you take time to notice. So, instead of thinking about all the negatives associated with airport travel — like the long lines and delayed flights — think about the stranger next to you who could turn out to be a whole lot more down the line.

So how did Match discover the top airports for singles to meet fellow singles? They went through their 2016 data from its Missed Connections feature, which uses location-based data to match you with fellow users you cross paths with in real life. If you still need a date for the holiday party you're flying to, you may be in luck. OK, maybe that sounds like a stretch, but it actually happened to me, years before Match came up with their Missed Connections feature. I was flying from L.A. to Chicago on Christmas Eve, and the guy I'd been seeing broke up with me on the way to the airport. Not the Christmas gift I was expecting. When I got on my plane, I asked someone to switch seats — I wanted to sit in the back and cry. But fate had other plans. The cutest guy was sitting next to me, and soon we were best friends — and he then asked me to be his New Year's Eve date. Point being, you never know, and the airport — or your actual flight — is as good a place as any to meet your future date, even if it just means having a coffee or drink together during your layover.

Plus, Match's feature is similar to Happn's geo-location feature, which I can also vouch for — I met my last boyfriend in part through Happn (and in part, Bumble), and Happn said we were crossing paths 50-some times a week… and we were. His office was around the corner from my sublet. So I have faith in Match's Missed Connections feature and data when it comes to airport love connections, too. That said, here are the top airports with the most Missed Connections, aka the top airports for meeting singles.