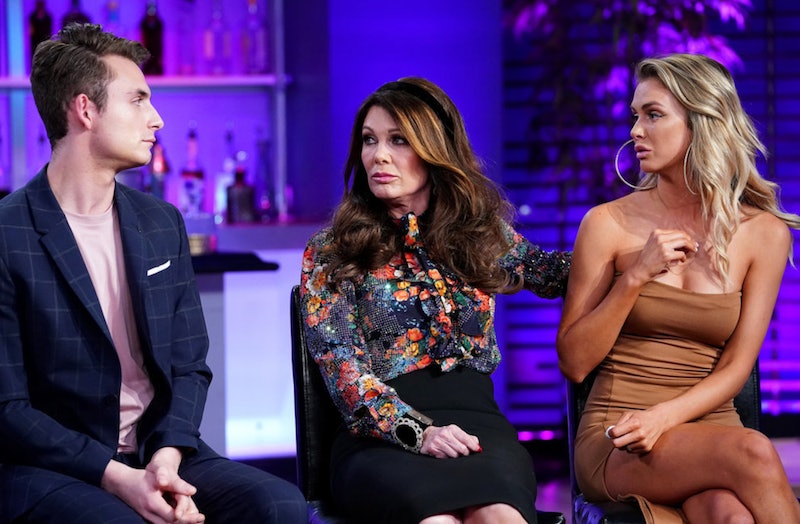 It only took six perfect seasons, but the best show on Bravo has received some major award show love. Vanderpump Rules is nominated for an award at the 2018 MTV Movie & TV Awards. And like the Pump Rules cast's reactions to the nomination, this news is ab-SUR-lutely delightful. Pump Rules, aka one of the most exhilarating shows to ever grace the boob tube, could finally be an award-winning series. If and when that moment does arrive, it will not be a millisecond too soon.

Pump Rules is up for Best Reality Series or Franchise, and it is competing against Keeping Up with the Kardashians, Love & Hip Hop, The Real Housewives, and RuPaul’s Drag Race. This category is as stacked as a tower of spare chairs out in the SUR alley. If you would like to vote for one of these great reality shows, you can do so now over at MTV's website.

After the MTV Movie & TV Awards nominations were released on Thursday, May 3, several members of the Vanderpump Rules roster let the internet know just how they feel about possibly taking home the golden popcorn on June 18. Why yes, they do seem to be pretty... pumped.

The Pump cast wants your votes.

They are not afraid to ask for your votes.

And they are not afraid to break out the emojis for your votes.

Do not let the Sexy Unique Cast down, Pump fans.

The reality series about a bunch of Sexy Unique Humans who work for Real Housewives of Beverly Hills star Lisa Vanderpump has been a juggernaut for quite some time, and it seems only to be gaining momentum. The show has been picked up for a seventh season. It is competing against the reality series whence it came at the MTV Movie & TV Awards. It has become its own entity that gives birth to spinoffs of its own. And for the love of ranch dressing, Robyn Rihanna Fenty is a fan. Pump Rules, well, rules.

And while we are on the subject of RHOBH and The Real Housewives franchise, it looks like Vanderpump is the Cate Blanchett of the 2018 MTV Movie & TV Awards, i.e., she's been nominated twice at the same award show. As DJ James Kennedy would say, LVP is killin' the game.

This is the first time the MTV Movie & TV Awards has included the Best Reality Series or Franchise category, and only the second year the award show has recognized television at all. However, this is not the first time the program has featured a reality TV category. In 2017, there was a Best Reality Competition category, and RuPaul's Drag Race won because duh. RuPaul was also up for Best Host that year, but lost to Trevor Noah.

It is a new year, a new category, and a new batch of contenders. So, which reality program will win the very first Best Reality Series or Franchise award at the MTV Movie & TV Awards? Sorry, but I do not have a Sexy Unique Crystal Ball; the answer won't be available for a month and some change.

But here is what I do know: Witnessing the Pump Rules cast stomp down the MTV Movie & TV Awards red carpet as nominees will feel like a dream coming true right before our eyes. Oh, and another thing: If Pump Rules does win the golden popcorn, Scheana Shay should change her forearm tattoo to "It has happened."