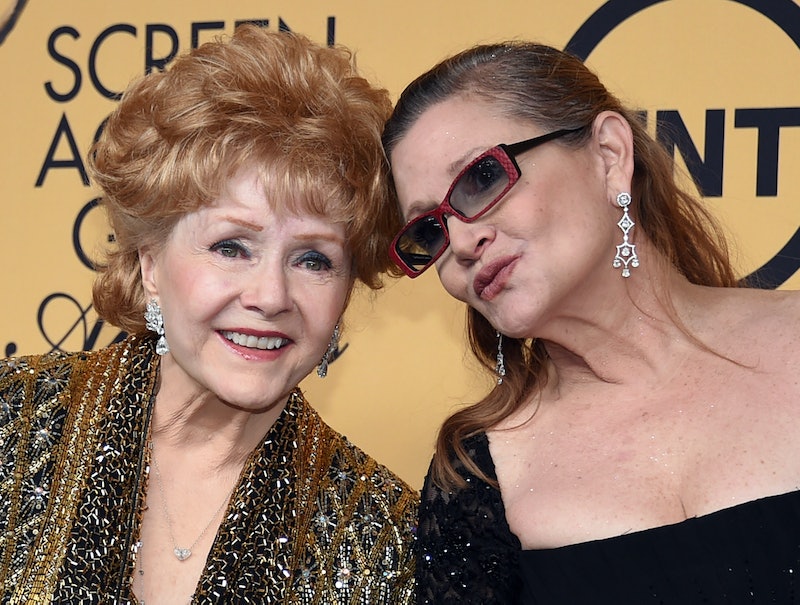 Nearly three months ago, the world lost both Carrie Fisher and Debbie Reynolds. With the public memorial for the two entertainers being held on Saturday, March 25, Todd Fisher has been opening up about his sister and mother's deaths. In an interview with Nancy O'Dell for Entertainment Tonight, Todd revealed that Reynolds asked for permission to go and be with Carrie. Todd had stated before that Reynolds wanted to be with Carrie when she died, but this new interview also shows that the legendary actor was trying to prepare her son for her passing.

"My mother said to me the night that Carrie died ... we were talking that night and I didn't know what was happening, but she was setting me up for her leaving the planet," Todd said. Beyond talking about how hard the death of Carrie was on both of them, he said that Reynolds started going over financial affairs — which she had done before — and changed her plans for her own funeral. He told O'Dell he didn't think much of it, and said, "I thought that we were just going through these events just like one would go back through an estate." He continue,

"But instead the next morning, we had a little further dialogue and she chose to leave the planet in front of my face two feet away. If you had told me this story and I wasn't there, I would have a very hard time believing what I saw. But she literally looked at me and said, 'I want to go be with Carrie' and closed her eyes and went to sleep."

While Reynolds' official cause of death was a stroke, the fact that she died a day after her daughter does make it seem like their bond was far greater than perhaps the public ever imagined. Todd's words about Reynolds' final moments back this up since he stated that his mother seemed to want him to approve of her decision to pass after Carrie's death. As Todd said,

Although losing both his sister and mother in the span of a day is devastating, Todd has made some peace with it. "That's kind of a magical, beautiful thing," Todd said about his mother's death. "As much as it's also hard, it's what she wanted."

Although Reynolds and Carrie didn't always have the best relationship, Todd's account of his mother's passing shows the powerful connection these two women had. Before she died, Reynolds made sure to let her son know how she loved him too, but in the end, she wanted to be with her daughter who had passed away too soon.