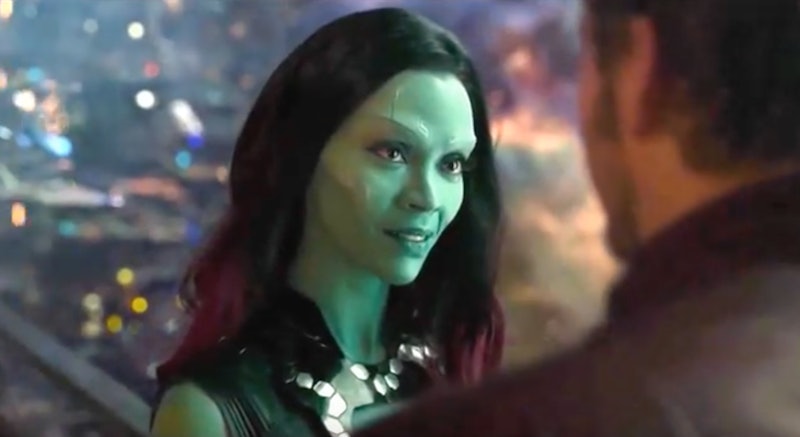 Marvel Studios/YouTube
By Angelica Florio
May 30, 2018

Spoilers ahead. It's already been over a month since Infinity War came out, but everyone who saw the third Avengers movie is still grappling over the film's shocking ending. Fans of the MCU have been busy since Thanos wiped out half of the earth's population, and already, they've come up with so many theories about how Avengers 4 might play out given the catastrophe that preceded it. The top Gamora theories for Avengers 4 reveal that there's hope yet, both for the green goddess and for the Avengers as a whole.

Many of the leading theories for Avengers 4 suggest that Gamora (Zoe Saldana) will play an integral role in undoing Thanos' destruction. Even though the end credits scene with Nick Fury calling Captain Marvel suggest that the Avengers' only hope lies in that hero (played by Brie Larson), that doesn't mean that Gamora won't also play a part in bringing back the half of Earth's inhabitants that disappeared into thin air.

Out of all of the many theories circulating about Avengers 4, the most compelling revolve around Gamora. Not only is Peter Quill's (Chris Pratt) love interest necessary to the Guardians of the Galaxy movies — which has a third installment coming up — but she is also essential to the MCU overall. The MCU has a lack of women of color, and it would be a huge loss for representation if Gamora's death stayed permanent for the next Avengers movie. Fortunately, a lot of the theories about the character's future suggest she will survive after all.