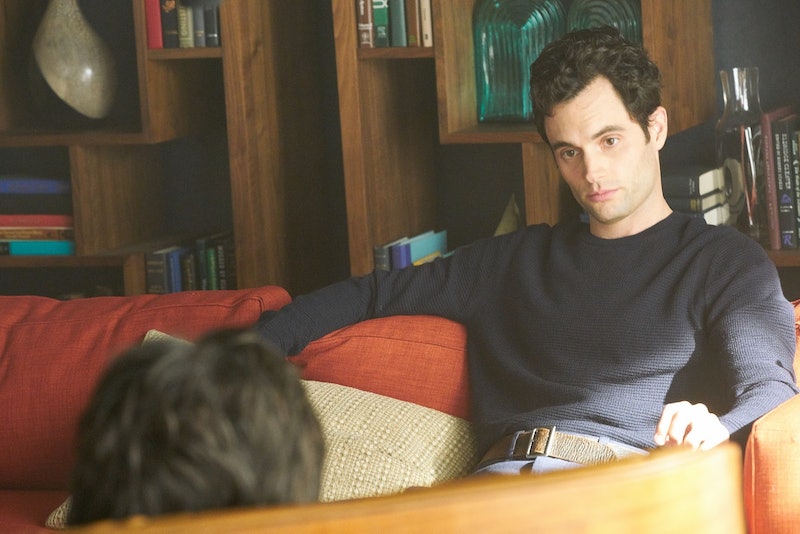 Gossip Girl and YOU will officially have more than just Penn Badgley in common for Season 2 — get ready for some badly behaved teens and privileged rich kids with dark secrets. On Friday, Feb. 1, Deadline reported that Jenna Ortega and James Scully are joining the hit Netflix series, and these new YOU Season 2 cast members are going to cause quite a lot of trouble for Badgley's breakout character, Joe Goldberg.

Ortega, who is known for her roles on Jane the Virgin and Disney Channel's Stuck in the Middle, will play Ellie, a teenager who, according to the outlet, "grew up fast in the big city" and "likes to act and appear older than her years." And thanks to Ellie's lack of parental supervision and desire to make money by whatever means necessary, the teenager has developed the ability to con any and all adults in her life, and she's hoping to make Joe her next mark.

Heathers alum Scully, meanwhile, will play Forty Quinn, the brother of Joe's newest obsession, Love (Haunting of Hill House star Victoria Pedretti). Described by Deadline as "confident, opinionated and privileged," Forty swings between charming and supportive and a harsh bully. After finishing up a 12-step program, he's relying on his sister, but the threat of relapse is always looming over Forty's head as he attempts to find stability.

Earlier this week, Pedretti — who played fan favorite Nell in Netflix's Haunting of Hill House — was announced as the subject of Joe's fixation in Season 2. Her character, Love, was described by Netflix's official Twitter account as "an aspiring chef who doesn't care about social media." More importantly, Love is recovering from a major loss in her own life, "so when she meets Joe she senses a shared knowledge of profound loss," according to the tweet. Of course, Love has no idea that Joe's loss — spoiler alert for YOU Season 1 — was the result of his own actions, so his incredibly dark secret will hover over their budding relationship.

But even though she's playing Joe's new love interest, Love and Beck (Elizabeth Lail) couldn't be more different, according to YOU showrunner Sera Gamble. "Like her name, she’s very warm and there is a carefree aspect to her spirit that really comes from the fact that she has constructed a life for herself that’s about being in the moment and doing what she loves every day," she recently revealed in an interview with Entertainment Weekly.

Gamble continued, "In that way, she’s very very different than the woman that you got to know in season one, Beck, who was ambitious and driven as a writer and also as a young person in a social circle that had a certain kind of status. Beck had been quite aware of her social media presence, and Love is extremely disinterested in all of that."

While Love might not be interested in social media of any kind, Badgley has been using his own social accounts to start an "elevated discussion" about Joe — and to discourage Twitter users from romanticizing his menacing character. Speaking to the New York Times last week, the actor explained that while he "didn't intend" for his tweets about Joe to go viral, he's hoping that YOU will encourage viewers to think critically about the character and toxic masculinity.

"I think what he’s meant to be is an embodiment and a portrait of the parts of us that can’t escape rooting for Joe. In a more just society, we would all see Joe as problematic and not be interested in the show, but that’s not the society we live in," Badgley said.

Later in the interview, he continued, "It would be awesome if any man watching this show could have any degree of the experience that I’ve had playing him. Personally, it’s been extremely enriching because, just look at the level of conversation we’re having now. You’re not always forced to think about the social forces in this way."

Hopefully, Season 2 of YOU will continue the important conversation about men like Joe and the way that society views them — as well as keeping everyone on the edge of their seats as Badgley's character makes his way to Hollywood, in order to continue his reign of terror.