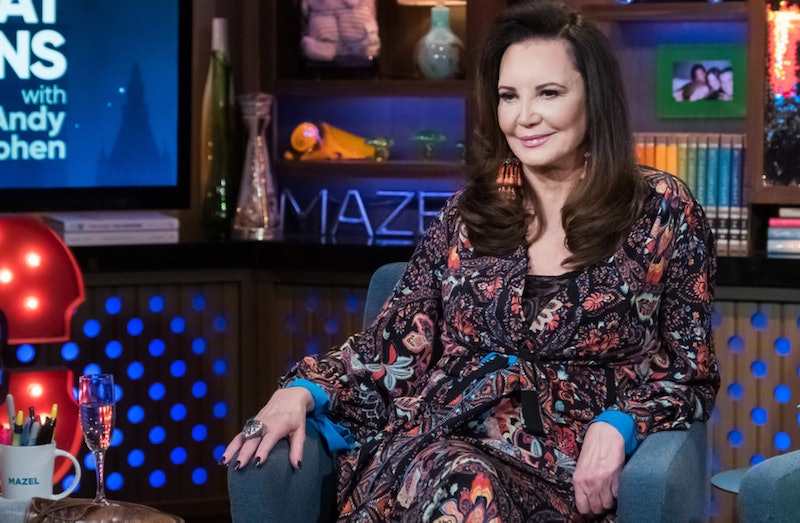 Hold on to your boats, because a mini Below Deck and Southern Charm crossover hangout session happened. On Monday, Below Deck's Captain Lee Rosbach and Mary Anne Rosbach got together with Southern Charm’s Patrica Altschul, Cameran Eubanks, Craig Conover, Shep Rose, and Danni Baird at Patricia's home. They did not hit the high seas together, but some of your favorite Bravo stars from two of your favorite Bravo programs did throw back a few cocktails at the very same place where we saw Ms. Patricia pretend to hear a doorbell ring when she was done with a conversation.

Bravolebrities Captain Lee and Patricia have become Twitter friends, and that Twitter friendship evidently led to the latter throwing a soirée when the former was visiting Charleston. And yes, they took photos. And of course they posted the photos on social media. And of course a diehard Bravo fan like yours truly would've loved to be a fly on the wall at this gathering. And of course I hope this means we are that much closer to a Southern Charm-ified episode of Below Deck.

Based on her IG caption, Cameran seems share this sentiment. She wrote,

“Patricia hosted a lovely evening for @captain_lee_rosbach and his wife Mary Anne who are visiting Charleston. They are so kind and down to earth. I’m trying to convince them to move here! I’m also trying to convince Pat to charter one of his yachts (she’s the only one of us that can afford it.)”

This dream does not seem so far-fetched. Last August, Captain Lee and Patricia chatted over Twitter about this very idea. Several weeks later, BravoTV.com released a video in which Captain Lee and Kate Chastain expressed why they would love to have Patricia on the yacht. "We’re ready whenever you say the word @capthlr," Patricia replied. "But I insist on bringing my Bell @Kate_Chastain@Bravotv#SouthernCharm"

Just how serious are they about this idea, you ask? Serious enough to still be talking about it all these months later. Nothing's been announced or anything, but Captain Lee and Patricia sure seem to be all about making the Below Deck/Southern Charm crossover dream come true. As Patricia recently told Decider, "[Captain Lee] wants to do it, Kate [Chastain] was all in favor. She was saying she and Michael could have a martini-off.” And according to Showbiz Cheat Sheet, when Patricia appeared on Watch What Happens Live with Andy Cohen last month, she said, "I want to charter a yacht and take all of Southern Charm on it." Captain Lee's response to the crossover idea: "I'm all in."

Captain Lee spending an evening with some of the Charmers at Ms. Patricia's estate does not guarantee the Southern Charm cast will appear on Below Deck, but wow, does it feel like a step in the right direction.

The day Ms. Patricia puts a doggy life vest on Chauncey the pug, packs up some nautical caftans, and climbs aboard a Below Deck yacht with the rest of the Southern Charm cast will be a good day for all.