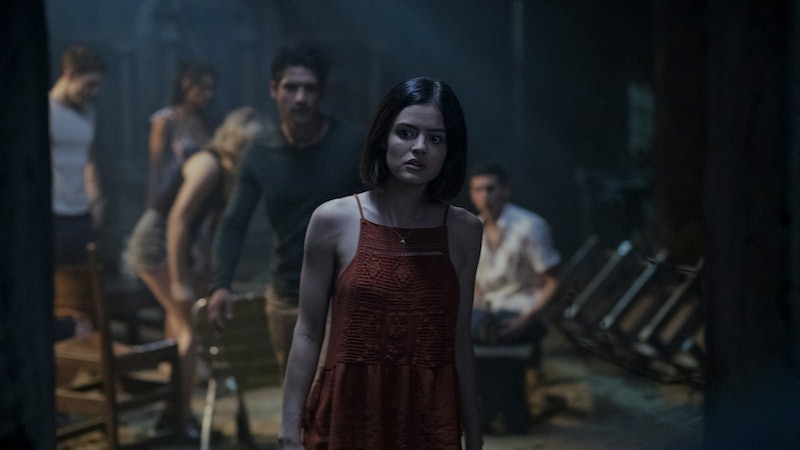 There are many things to love about October — crisp fall weather, pumpkin-flavored everything, tons of cozy sweaters — but the best thing is being able to celebrate Halloween all month long. And there's no better way to enjoy the spooky season than with jump scares and nightmare-inducing supernatural plots. Which is why these scary movies streaming on HBO Now are exactly what Halloween-devotees and horror fans need to kick off the fall.

HBO's streaming service, HBO Now, which allows fans to catch up on their favorite shows and films without requiring a cable subscription, is offering something for every kind of horror fan ahead of Halloween. In addition to full seasons of the Spanish-language cult hit Los Espookys and the horror anthology Folklore, HBO Now subscribers can check out the network's October catalog of some of the scariest films of all time. In the mood for something spooky and unsettling? HBO Now has options like M. Night Shyamalan's breakthrough alien invasion movie Signs to set the tone for any creepy evening. And, just in time for Oct. 31, HBO Now will be adding two new films to their site: Happy Death Day 2U, which will be available on Oct. 12, and The Conjuring 2, which will debut on the service on Oct. 21.

Still, with everything from campy classics to iconic slasher flicks available to stream this October, it can be hard to figure out which films deserve to be included in any upcoming macabre movie marathons. Here are most truly terrifying options on offer to stream on HBO Now:

The ultimate Halloween slasher flick is, well, Halloween. The 2018 sequel revisits Jamie Lee Curtis' Laurie Strode 40 years after she first escaped from Michael Meyers' killing spree in the original 1978 film. In addition to bringing Laurie and Michael back to the big screen, the 2018 Halloween also studied the long-lasting trauma that surviving a violent attack has on victims, offering a fascinating and feminist bent to the horror classic.

The fourth installment of the horror series brings fans back to the very beginning of the Purge, when it was simply an experiment conducted by a dystopian government as an attempt to lower crime. However, their plan works a little too well, and the unabashed violence and anarchy spreads far beyond the borders of Staten Island, and sets of a terrifying annual tradition.

A remake of Michael Haneke's harrowing cult classic, Funny Games stars Naomi Watts and Tim Roth as a couple who are taken hostage on vacation and subjected to a night full of torment and terror by a group of hooligans, led by Michael Pitt. It's the kind of unsettling movie that will make viewers double check their doors are locked, just in case.

What's Halloween without a little body horror? Director Eli Roth's debut film centers around a group of friends who rent a cabin for a weekend and contract a horrifying flesh-eating disease that causes their skin to fall off right in front of their eyes. Also, Rider Strong a.k.a. Shawn Hunter himself stars in it, which will add a fun does of nostalgia to the terrifying proceedings.

Speaking of early aughts nostalgia, Stay Alive follows a group of gamers — played by some teen drama icons, like Sophia Bush, Samaire Armstrong, Milo Ventimiglia and Frankie Muniz, as well as a pre-Westworld Jimmi Simpson — who discover that when they die in the game they're playing, they also die in real life.

For a film about a haunted game IRL, there's always Truth or Dare, which stars Lucy Hale and Tyler Poesy as teens who get roped into a game of Truth or Dare that forces them to do increasingly life-threatening stunts or die. The only way to beat the game? Pass it on to someone else.

Before you break out your glitter and oversized hoodies for a Euphoria-themed costume, take a little bit of inspiration from Kat (Barbie Ferreira) and watch The Nun, the creepy origin story from the Conjuring franchise.

Here's the full list of the scariest horror movies available to stream on HBO Now this October:

With so many scary movies available to stream on HBO Now, horror fans everywhere are guaranteed to remain on the edge of their seat, all month long.