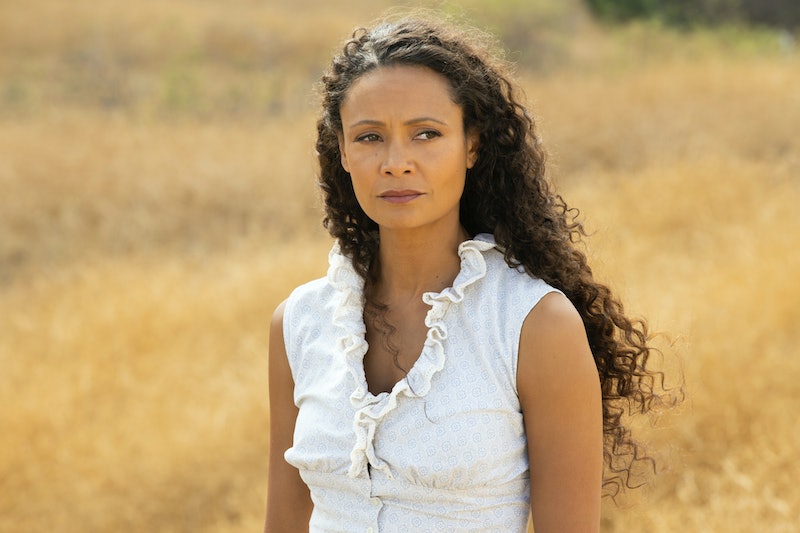 Only one day after the Season 3 finale, Westworld Season 4 fan theories are already in full swing. Though this was by the show's most straightforward season, it did save some final twists for the end: after the credits rolled, there were not one, but two post-credits scenes that are now sending views into a tizzy of speculation. The first was an extended sequence featuring the death of human William (and the rise of host-William), while the second showed Bernard exiting the Sublime in some distant, dust-covered future. What do these scenes mean for the recently confirmed Westworld Season 4? It will likely be two long years until fans get answers to that question, but that won't stop them from trying to solve the mystery in the meantime.

1. There Will Be A Time Jump

The Season 2 finale's post-credits scene first teased the existence of a far future timeline, as a host version of William stumbled into a dusty, ruined version of the Forge and was confronted by a host version of his daughter, Emily, for fidelity testing. Now, the Season 3 finale's post-credits scene has once again teased this far future, as Bernard woke up after his long foray into the Sublime into a similarly dust-covered apocalyptic landscape. But when will the show actually reach this timeline? Plenty of Reddit users, like yeyeman9, think that Season 4 will feature a massive time jump that catapults Westworld full-time into the future glimpsed in those two sequences.

2. Charlores Will Be The Big Bad

Throughout its first three seasons, Westworld has had more than its fair share of antagonists: William, Charlotte Hale, Engerraund Serac. But with all three of those villains now dead, who will step up to take their place? Reddit user TheLonelyRavioli espouses a common theory among fans that Charlores (the copy of Dolores inside Charlotte Hale's body) will be the show's new Big Bad after Serac's downfall. If Dolores Prime was the version that always saw the beauty in things, then Charlores is the version that sees the chaos. Bernard was afraid that Dolores Prime wanted to kill all humans, but she proved him wrong; in Season 4, Charlores may be the one Bernard should've been worried about.

If Charlores is the show's new main villain, then what will her evil plan be? Reddit user niki_da_human thinks that Westworld will finally adapt the plot of Futureworld, the 1976 sequel to the original Westworld film that inspired the HBO series. In that film, it was revealed that the Delos corporation was using its advanced robotic technology to duplicate and replace the rich and powerful in order to take over the world. The Season 3 finale's post-credits scene showed that Charlores was busy printing dozens (if not hundreds) of host bodies; what if her plan is the same as Delos' plan in Futureworld? Perhaps she plans to replace world leaders with hosts under her control, in order to help guide humanity towards its own extinction.

4. Bernard Will Be The Gatekeeper Of The Sublime

Now that it's been revealed how and when William was turned into a host, it still remains to be answered why he was being put through a loop in the Season 2 finale's post-credits scene, and who was testing him for fidelity. Reddit user buttermelonMilkjam has a theory: since Bernard has the key to the Sublime, perhaps he will act as a gatekeeper of sorts to that digital Eden. He might be willing to accept copies of human minds in order to save them from Charlotte's apocalypse, but only if they can first prove that they are able to break from their own "programming" and act of their own free will — which is why he was testing William, to see if he could ever make a different choice that didn't result in the death of his daughter. If he ever passes the test, perhaps William can join the hosts in the Sublime.

5. Maeve Will Recruit An Army

Maeve fought against Dolores' rebellion for most of Season 3, but realized the error of her ways just in time to help bring down Serac and destroy Rehoboam in the Season 3 finale. Now, in order to atone for helping a man who wanted to enact a genocide (against hosts), in Season 4 she could lead the fight against another villain who wants to enact a genocide (this time against humans). But where will Maeve find the help to defeat Charlores? Reddit user Arliss8675 thinks that Maeve will team up with Bernard to recruit hosts from the Sublime to re-enter the real world and form an army to save humanity. That means viewers might see fan-favorite characters like Teddy and Akecheta, who were thought to be gone for good.

6. Solomon Wants To Turn All Humans Into Hosts

After being uploaded into Rehoboam via the Trojan horse that was Dolores' memories, it was revealed that Solomon's plan would lead to multiple mass casualty events, and eventually the extinction of the human race. But what if there's more to it than that? What if humanity goes extinct… because Solomon writes a future where they're all turned into hosts? That's what Reddit user Falltime2017 thinks Solomon's plan is. If it determines that humanity's extinction is unavoidable, perhaps turning them all into hosts is the only way to salvage what's left of the human race. Or maybe it just wants to turn everyone into predictable, controllable robots…

Westworld Season 4 likely won't arrive until sometime in 2022, so fans will have plenty of time to come up with more wild theories.