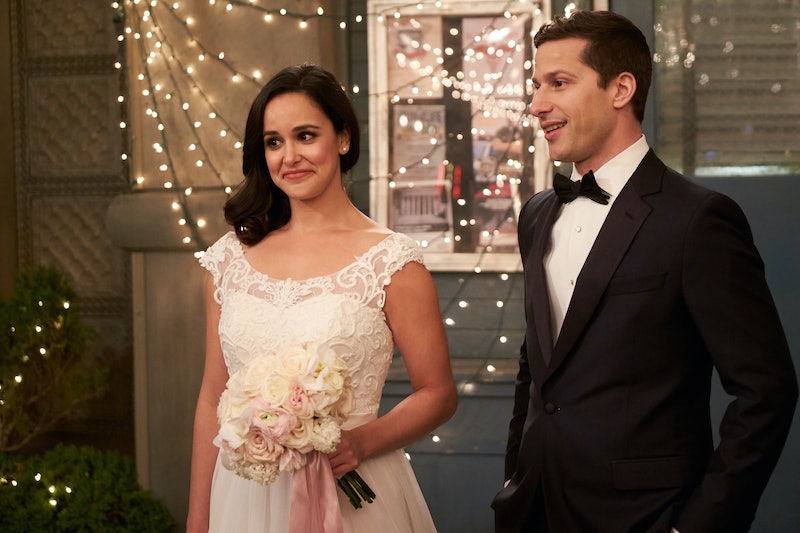 A wedding makes for a fine series finale for a sitcom, but Brooklyn Nine-Nine fans weren't ready to accept that Jake and Amy's wedding in the Season 5 finale on May 20 would be the end. And thankfully, when Brooklyn Nine-Nine Season 6 premieres, you'll get to see how the newlyweds are doing. Because after Fox canceled Brooklyn Nine-Nine, NBC saved the day and picked up the series. And while this cancelation scare will impact when Brooklyn Nine-Nine will return, the fact that it will be coming back at all should help you get through the wait.

A solid five-season run for a sitcom is nothing to scoff at, but Brooklyn Nine-Nine was canceled before the series had finished telling its story. According to Entertainment Weekly, CEO of Fox Television Group Dana Walden said that Fox didn't have a place in its programming schedule anymore for the zany police comedy. But NBC jumped at the opportunity to add Brooklyn Nine-Nine to its lineup. As Deadline reported, the series is produced by NBC's sister studio Universal TV and NBC Entertainment Group chief Bob Greenblatt noted that he considers it a "missed opportunity" that the first five seasons of Brooklyn Nine-Nine were not on his network.

The major downside to NBC taking on Brooklyn Nine-Nine Season 6 is that it will only be 13 episodes, according to TV Line. As Deadline reported back in 2013, Brooklyn Nine-Nine was originally picked up for a 13-episode Season 1 by Fox. Season 1 ended up having 22 episodes since Fox back-ordered nine additional episodes after the series had premiered. (Ah, those were the days.) Since then, Brooklyn Nine-Nine seasons have had 22 to 23 episodes, depending, so this is a big cutback. But to look on the bright side, it's almost like NBC is bringing the show back to its roots with the 13 episodes.

Another way to look at it is that other NBC comedies are also only 13 episodes, so that's pretty standard. For instance, Season 3 of The Good Place will have that episode count. Michael Schur — of other beloved NBC comedies like The Office and Parks and Recreation — created both Brooklyn Nine-Nine and The Good Place. So it would be a Schur fan's comedy dream if those two shows aired back-to-back. However, as TVLine shared, NBC's 2018 fall programming is already scheduled. And while The Good Place is scheduled, there is no Brooklyn Nine-Nine in sight.

That's because NBC won't premiere its version of Brooklyn Nine-Nine until the midseason with fellow comedy A.P. Bio. And looking at the scheduling of A.P. Bio may actually provide a hint of when Brooklyn Nine-Nine will return. A.P. Bio was a midseason show this year and its 13 episodes premiered on Thursday, Feb. 1. If NBC sticks to its traditional schedule of comedies on Thursdays and keeps that same timeframe, then it's possible that Brooklyn Nine-Nine could premiere on Jan. 31 or Feb. 7 of 2019.

As for what fans can expect for a Season 6, there's plenty to be excited about besides Andy Samberg's Jake and Melissa Fumero's Amy being married finally. (As long as everything goes well in the finale.) After all, Captain Holt could end up becoming the New York City Police Commissioner. And Rosa may have a new girlfriend in guest star Gina Rodriguez, who will catch Rosa's eye during the Season 5 finale.

So beyond the return of your favorite characters, Brooklyn Nine-Nine Season 6 will offer new storylines — and a chance for closure. As Fumero wrote in an Instagram post, "Thank you to NBC for giving us the opportunity to finish this special show!!" And while it's unclear if Season 6 will be its last, Brooklyn Nine-Nine will return with a bang at least one more time in 2019.