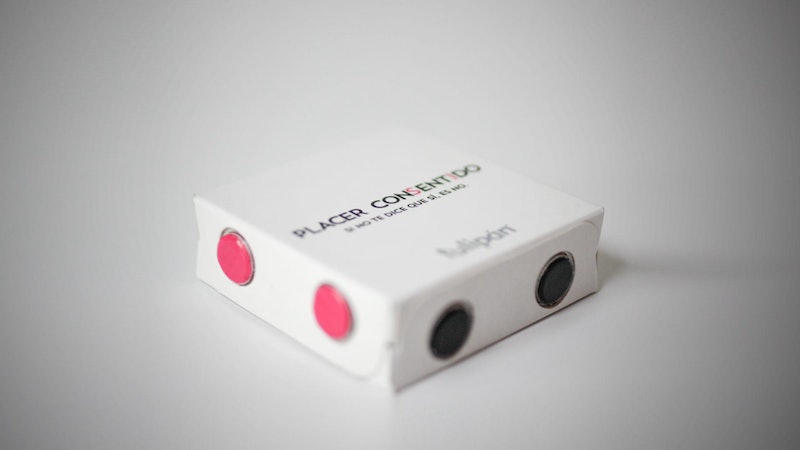 In an effort to promote sexual consent and condom use, Argentinian sex product company Tulipán (which translates from Spanish into English as “Tulip”) has created what they call a “consent condom” which requires four hands to open. The gimmick is that the condom’s box can’t be opened unless both partners consent to whatever sexual activity is about to occur. But that’s all it is — a gimmick. As many have commented on Twitter and elsewhere on the internet, it isn’t going to stop sexual assault from occurring. What’s more, it reinforces all kinds of problematic ideas about what is and isn’t sexual assault, either oversimplifying or completely ignoring many of the behaviors that, yes, are in fact assault — even as rape culture makes excuses for why they aren’t, or why what happened to the survivor is their own fault, or why assault isn’t that bad in the first place.

The so-called “consent condom” arrived on the internet at the end of March, although the English language internet has only just discovered its existence. According to a promo video released by Tulipán, the condom’s box features eight buttons or contact points spaced around the outside edge. In order to open it, one person must use two hands to hold the buttons on the top and bottom of the box; then a second person must pinch the box via the buttons on the remaining two sides with their own two hands to lift off the lid fully.

The condoms are being promoted across the internet with the hashtag #PlacerConsentido, or “permitted pleasure.” They’re not currently available to purchase (they're absent from Tulipán's online store); according to CBS News, they’ve hitherto only been seen in the wild after having been placed at bars and events in and around Buenos Aires as a sort of guerilla marketing tactic. CBS News does also report, however, that you’ll be able to buy them at some point later in 2019.

It is worth noting that the condom itself wasn’t created as a means of preventing sexual assault; it’s more of an awareness-raising tool, a symbol meant to emphasize the importance of consent and to promote the use of condoms more widely. Said Joaquin Campins, the creative director of ad agency BBDO, which is marketing the condom, according to The Next Web, “Tulipán has always spoken of safe pleasure but for this campaign we understood that we had to talk about the most important thing in every sexual relationship — pleasure is possible only if you both give your consent.” Added Campins, “If it’s not a yes, it’s a no.”

But the fact remains that, globally, rape culture has a problem acknowledging when rape or assault has actually occurred — and because of that, the message of the “consent condom” is irresponsible at best and outright harmful at worst.

First, let's address the most obvious issue: Not being able to open a condom package isn’t going to stop or prevent sexual assault from occurring. A 2013 study out of the University of Arizona examining the use of condoms during sexual assault looked at 841 sexual assault reports from the Los Angeles Police Department, the Los Angeles County Sheriff’s Department, and the St. Louis Metropolitan Police Department and found that condoms were used in just 11 to 15 percent of cases. The bottom line is that the majority of rapists and assaulters don’t use condoms when they choose to rape or assault someone, so using a condom as the communication medium for the message Tulipán hoped to impart simply isn’t that effective.

Second, consent isn’t a one-time thing; it’s ongoing. Giving consent for one activity doesn’t give consent for all activities; giving consent for one sexual encounter doesn’t give it for all encounters in perpetuity; giving consent to one partner doesn’t give it for all partners; and consent can be revoked at any time. However, pegging the granting of consent to one gesture — the opening of a box — sends the message that consent is a one-time thing: That by opening the box, both participants have given blanket consent for everything that happens after the box is opened. But that’s simply not true, and to ignore the fact that anyone has the right to revoke consent at any time is to reinforce common victim-blaming narratives:

“It wasn’t really rape; she had already had sex with him before.”

“It wasn’t really rape; she had already started having sex with him.”

“It wasn’t really rape; she has sex with everyone.”

We see these narratives pushed by rape apologists time and time again, in both the legal courts and the court of public opinion. Consent culture has long been working to dismantle these myths, but they are still very much alive and well. We only have to look to the news to see it — to see how easily rapists and assaulters are let off, how quick we are to allow them redemption, how soon we ask when they’re going to be making their “comebacks”; and to see how poorly we treat survivors, how much we disbelieve them, how frequently we tell them they were "asking for it," that they are worth less than the people who attacked them.

What’s more, as several Twitter users have pointed out, opening the box doesn’t even prove consent was given in the first place. Sexual coercion is a very real thing, and verbal sexual coercion in particular occurs with a horrific degree of frequency. As a 2018 review of the literature on the prevalence of verbal sexual coercion with regards to its relationship with consent and unwanted sex highlighted, a study published in the journal Psychology of Violence in 2014 found that a whopping 58 percent of participants “reported experiencing unwanted sexual contact by coercion an average of 2.3 times.” That wasn’t all, either; 55 percent of participants reported attempted rape by coercion, while 46 percent reported completed rape by coercion.

And, as writer and editor Holly Baxter pointed out both on Twitter and in an op-ed for the Independent, the “consent condom” is ultimately “a product designed essentially to protect men from rape accusations, not to protect women from rape.” It doesn’t address the issue of people — everyone, but disproportionately women, trans people, non-binary people, gender nonconforming people, and LGBTQ people — experiencing assault, but rather the issue of people saying they’re experiencing assault. It allows a rapist to say, “Look, I can prove she consented: She opened the condom box with me. If she hadn’t consented, I wouldn’t have been able to open the box.” And, as previously noted, despite the fact that this logic is fallacious, it’s still widely ascribed to by the world at large.

This is what it is to live within rape culture.

As Baxter points out, yes, the “consent condom” may be an advertising gimmick, but it still matters. The messages advertisements communicate matter. They normalize behaviors and attitudes, positioning them as socially acceptable, even when they shouldn’t be — even when they’re long-held beliefs we should be challenging with our every breath.