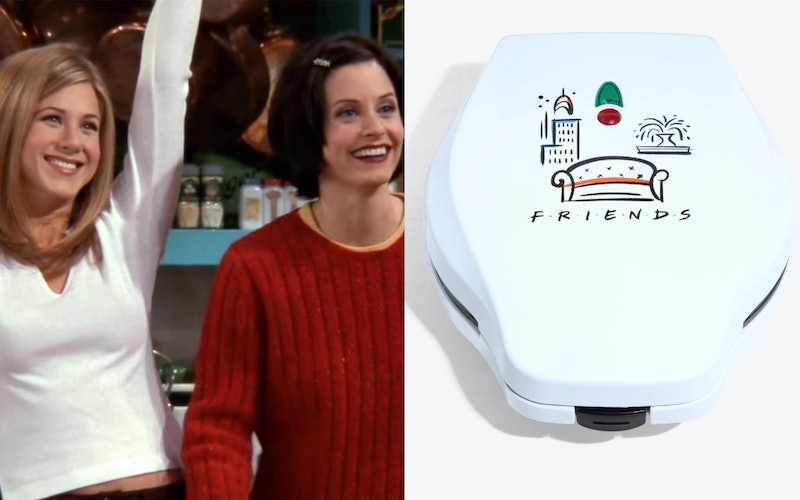 Whether you are ride or die for Friends or would rather die than watch another episode, we can all agree on one thing: doughnuts. Thus, this Friends-themed mini doughnut maker may be the thing that unites us all. In the center of the Venn diagram of people who love Friends and people who love doughnuts is this kitchen appliance, ready to always be there for us. (Clap clap clap clap.)

Your new favorite kitchen goodie comes courtesy of Box Lunch, a pop culture-themed retailer that also donates a portion of its proceeds to fighting hunger in America. “Central Perk is for hangin' out with your Friends, not spending money on overpriced pastries,” a description for the mini doughnut maker reads. “You don't have to be a chef like Monica to bake your own pastries—even Joey could bake with this mini donut maker!” To make your own Friends-themed doughnuts, you just spray the machine with cooking spray, pour in your batter of choice, and bake. Then, voila! The perfect treat to marathon-watch or hate-watch another episode or six.

Unfortunately, the Friends-ness of it all doesn’t extend beyond the logo on the front. Each of the six doughnut molds are not in the shape of Phoebe, Rachel, Monica, Ross, Joey, or Chandler. It doesn’t sing “Smelly Cat” when the doughnuts are ready. It doesn’t taste like nostalgia unless you think nostalgia tastes like doughnuts.

The mini doughnut maker is currently 20% off, marked down about $6. However, even if you miss the sale, you’ll be doing some good. As mentioned, BoxLunch’s mission focuses on fighting hunger. “With every $10 spent on our pop culture-themed product offering of apparel, accessories, home goods, gift and novelty, and collectibles, BoxLunch will help provide a meal secured by Feeding America on behalf of local member food banks,” BoxLunch’s website states. To date, the company has donated over 40 million meals.

While you’re adding things to your online shopping cart, you’ll want to check out the entirety of BoxLunch’s Friends collection. The doughnut maker will pair particularly well with this heat-changing Friends mug and these Friends pajama bottoms. If you’re planning on taking your mini-doughnuts on the go, this Central Perk travel mug will be ideal for dunking.

If you want to express your love for Friends in full-fledged fashion, you have more than a few options from BoxLunch. There are these enamel Friends pins that you can use to deck out your life with tiny lobsters, cafe couches, and other Friends-themed icons. There are Friends fanny packs, Friends sweatshirts, and Friends tea towels. There’s even a Friends baby onesie if you’re looking to indoctrinate the youth.

If it seems as though you’ve been unable to escape the Friends-themed content recently, you’re not imagining things. This year marks the show’s 25th anniversary hence the onslaught of all things Friends. Earlier this year, a Friends pop-up was announced in New York City, giving fans the opportunity to immerse themselves in the world of their favorite six-some. As you might expect, coffee and tea partnership are also happening. You can buy Friends-themed coffee and tea from the Coffee Bean & Tea Leaf or stop by one of their stores to try a special drink named after a Friends character.

There’s a Friends and Lego collab that officially dropped this week and is already out-of-stock on Lego’s website. There’s Friends collection at Pottery Barn for fans with more refined taste. There’s a Friends collection at Urban Outfitters for fans who want to wear their nostalgia on their sleeve. There’s even a company that wanted to pay you to watch 25 hours of Friends. Unfortunately, their application is currently closed. You’ll just have to settle for making mini doughnuts and watching the show for free.