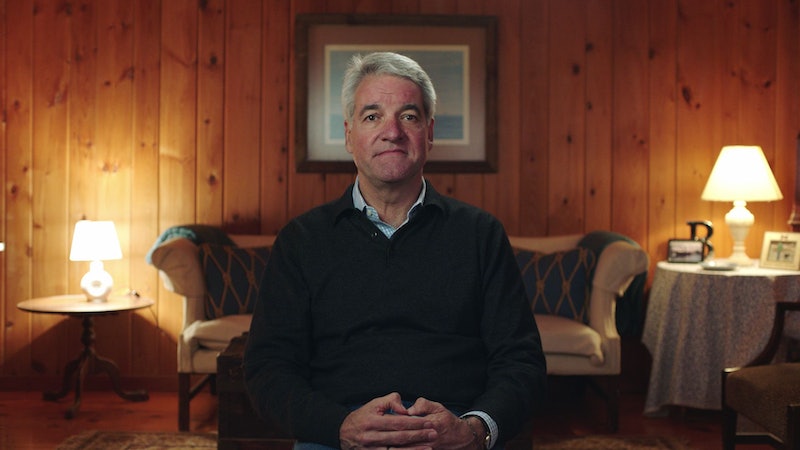 Welcome to Jurassic Fraud! The internet has blessed us all with a Jurassic Park and Fyre Festival mashup video that proves they're both disasters that we just can't look away from. In fact, this video offers some very solid proof that Jurassic Park was actually the original Fyre Festival — just with fewer sad cheese sandwiches and Instagram models. Hold on to your butts, this is gonna be a lot of fun.

In Nerdist's hilarious mashup of the 1993 Steven Spielberg classic and Netflix's much-talked about Fyre documentary, John Hammond is cast as Fyre Festival founder Billy McFarland, which, hello, is genius since they actually have a lot in common. Most notably, they both put together an island getaway for wealthy travelers in a remote location that wasn't quite equipped to host them.

Of course, after all these years, Hammond has continued to wreak havoc on the world. In Jurassic Park 2 he put together another scheme that involves transporting dinos King Kong-style to a new theme park in San Diego that failed. Twenty-two years later, Hammond's park rebranded itself as the luxury resort in Jurassic World, adding more dinosaurs to terrorize guests. He really was a mad man.

McFarland, on the other hand, was convicted of fraud last year and sentenced to six years in jail. Let's not be surprised, though, if he pulls a Hammond and decides to give Fyre Festival another try once he's out.

Nerdist's mashup video melds footage from Fyre and Jurassic Park, that includes favorites like mathematician Ian Malcolm (Jeff Goldblum) who is so not happy with Hammond's plan. "Before you even knew what you had, you patented it and packaged it and slapped it on a lunch box," Ian says, "and now you’re selling it.”

Also, in this faux-mentary, Hammond has an Instagram and paleontologist Dr. Alan Grant (Sam Neill) isn't the hero, but a "neurotic person," who's freaking kids out with cruel electrocution jokes. Not cool Alan, so not cool. And those sandwich pictures from the real Fyre Festival that went viral? Well, they've been replaced with snaps of jiggly green Jell-O, a callback to the final Jurassic Park scene where the T-Rex takes on the velociraptors, saving Hammond a lawsuit.

While Dr. Ellie Sattler (Laura Dern) doesn't make an appearance she does offer a one-word review of the film: "Run!" But it's Ron Funches who might have the best take of all on the con that was Jurassic Park: "That is Darwinism at its finest." That really should be the tagline for Jurassic Park, right?

Unfortunately, Fyre's breakout star Andy King is once again asked to do the unthinkable for this fraud, popping up to say that Hammond asked him to “suck d*ck to fix this problem.” (Don't worry, though, King probably doesn't have a problem with Nerdist poking fun at him. After all, he had a very positive response to his Fyre appearance becoming a meme. "I’m now a noun, a verb, an adjective," King revealed in a video shared by Netflix.)

Let's just hope for King and everyone else's sake that unlike Jurassic Park there won't be any Fyre Festival sequels in the works. Or, at the very least, if there is one, it will take its inspiration from a less disastrous '90s movie, like say Sister Act.