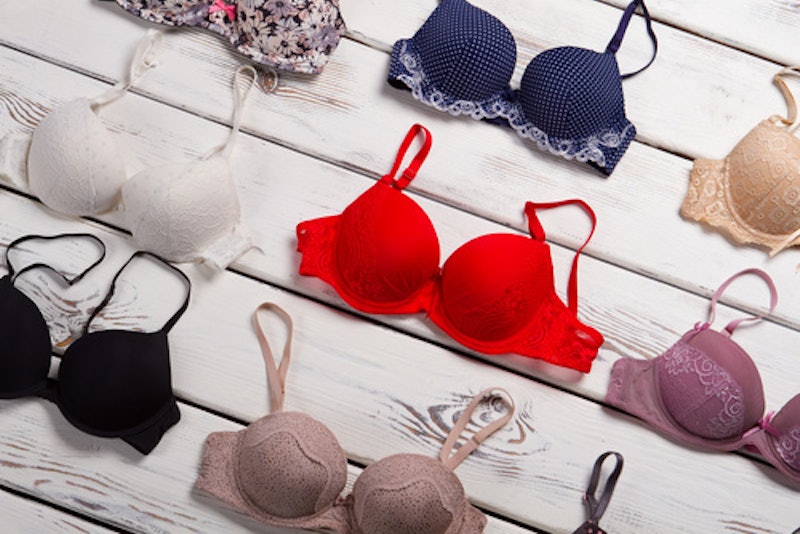 Today in news that will make you cringe, there's this: A restaurant in China is allegedly offering discounts to women based on their breast size. The discount went viral after posters advertising the discount hit social media, and, well… you can probably guess how that went over. (Not well, is the answer. Not well at all. And, I mean, fair, because that is some sexist bullsh*t.)

Originally reported in the Chinese newspaper Qianjiang Evening Post on Saturday, Aug. 5, the story about the sexist discount, at a restaurant whose name translates to "Trendy Shrimp," was picked up by the BBC on Monday and spread like proverbial wildfire. For what it’s worth, I’m actually somewhat encouraged by why the story started to go viral; the original report from the Qianjiang Evening Post wasn’t merely about the restaurant itself, but about people lodging complaints about it allegedly being sexist and awful. According to the BBC, one complaint called the posters “vulgar advertising” and “discriminatory towards women.”

The BBC reports that Trendy Shrimp general manager Lan Shenggang allegedly sees nothing wrong with the discount, which runs on the principle that the bigger the breasts, the larger the savings. “Once the promotion started, customer numbers rose by about 20 percent,” Shenggang reportedly told the Qianjiang Evening Post. He also noted that “some of the girls we met were very proud — they had nothing to hide.”

I do want to be clear that I’m not making a pronouncement about boobs being bad, or intending to body shame or sex shame anyone, or anything of that ilk. Boobs are fun! Sex between enthusiastically consenting partners is fun! Bodies are fun! All bodies are good bodies! All of these things are fine. Those girls who were “very proud?” They are absolutely allowed to be proud of their own bodies. That is awesome.

But there are an awful lot of things that are problematic about offering discounts for a service based on breast size. It encourages objectification, for one thing, which, goodness knows, does not require anymore encouragement than it already gets. In so many cultures all over the world, women are still frequently viewed as objects, with their bodies being considered public property or commodities to be sized up and valued. But women are not objects. Our bodies are not public property. And continuing to insist that we are is not doing anyone any favors.

There’s also an issue with the fact that the discount is allegedly based on breast size in particular — it implies that large breasts are inherently more valuable, both literally and figuratively, than small breasts. Breast size doesn’t determine someone’s worth, and it’s really problematic to imply not only that it does, but — worse — that you are worth less as a human being than someone else purely because your boobs aren’t as big.

Furthermore, the situation gets even stickier when you consider what the wage gap is like in China. According to non-profit organization Catalyst, women in China earn on average 35 percent less than men for doing the same work; if you want to get a little more specific, the average annual income for women is just 67.3 percent of that earned by men in urban areas, and 56 percent of men’s in rural areas. According to the 2016 Global Gender Gap index, China ranks quite poorly, coming in at 99 out of 145 countries.

But, like, here. Have a restaurant discount dependent on how big your rack is. That’ll fix the problem, right?

Although I was somewhat encouraged by the fact that people spoke out about the promotion, this story doesn’t really have a happy ending. The posters did get taken down — but the discount is apparently still valid, according to the store's manager. “The posters have been removed, but our discount activities continue,” Shenggang told the Qiuanjiang Evening Post.

Just because you can do something doesn’t mean you should do it — which, alas, is a life lesson the Trendy Shrimp seems to have missed. And sadly, they're not the only ones, at least not in China; in 2015, a restaurant in Zhengzhou allegedly started evaluating customers and letting the prettiest ones eat for free, while in 2014, one in Chongqin reportedly covered the meals of men weighing more than 140kg and women weighing less than 34.5kg.

One day, I hope that we'll have moved beyond all this. And I hope that day comes soon. Because honestly, it's long overdue.