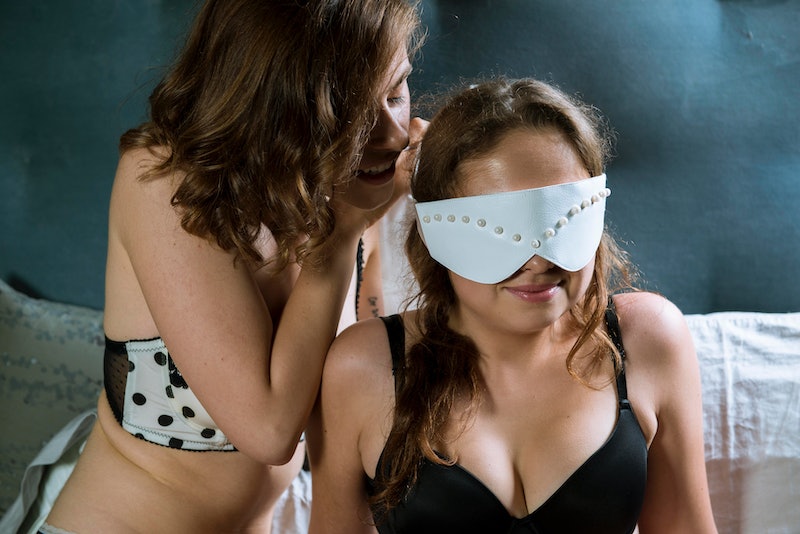 To understand why, let's first look at the precise wording of the new legislation so we know what affirmative consent is:

If you're still unclear, there's also an affirmative consent "standard," which is that it is "the responsibility of the person who initiates sexual contact to make sure they have the verbal consent of the other person". Basically, affirmative consent now means an enthusiastic "yes," not just the absence of "no," as the basic standard for sex to be consensual.

1. Talk In Detail About What You're Going To Do To Each Other

Basic way to get verbal consent: talk. That seems obvious and kind of a boner-killer, but trust me, it's not. If your partner is describing, in detail, what they plan to do to you, and you're coming right back at them with your own suggestions, alterations, and serious enthusiasm, that is a deep yes right there. (It's particularly necessary, as well as sexy, if you're about to do something complicated involving restraint or domination.) Be open and dynamic, if you can. "That sounds great" is also a totally acceptable response.

3. Make Your Consent Constant And Vocal

Feedback during sex is a genuinely good idea: if something hurts or you want to change positions/get more lube/whip out a toy/make them go harder/whatever, it's important to speak up. But affirmative response ("oh yes," "keep doing that") has a dual purpose.

You validate and encourage excellent sexual behavior (seriously, this is the basis of a lot of sex advice: reward them when they do something that pleases you, verbally, with a lot of evident pleasure), while also maintaining your consent. Result? They know what you like, are more likely to do it next time, and nobody's confused about whether you're consenting or not. Better sex with consent: absolutely a thing.

Yes, that's bad practice in legal proceedings, but it's an excellent way to affirm consent in bed. There's a fantastic list of leading sexual questions over at the Washington Post (now there's a sentence that's never been written before), but they should all work around the same tenet: "Do you like this?"

Of course, you've got to mix it up a bit. "Do you like it when I do X to your Y?" "Is this movement making you hot?" "Am I correct to interpret that moan as a suggestion to continue?" Get imaginative.

5. If You're In A Relationship, Come Up With Consent Signals

If you're in a long-term relationship or dating somebody who will also find this hilarious, why not have an ongoing, affirmative-consent signal that will clearly express how much you're up to get down? Have you seen those little paper signs that everybody on Pinterest has been waving at weddings for the past six years, marked with "YAY!" in a hipster font? Well, "SEX YES!" flags, texts, and even banners hanging up across your kitchen sounds like a great variation to me. If you both flash them, then you know you're good to go.

And don't tell me it's not romantic. Desire is romantic as hell. Silliness is another matter, but sex is silly. Seriously, there has never been a weirder practice in human history.

Permission can be seriously alluring. This is a reversal of what is normally referred to as a "begging" situation, where one partner pauses and makes the other partner beg or request for things to continue. That can be pretty easily molded into affirmative consent, and it's also hot as sh*t.

Stop what you're doing to them and ask if they want you to go on. Withhold for a bit; make sure they say it really clearly. Saying "I can't hear you" is totally acceptable. Make them yell it, writhe around, start making animal noises. Affirmative consent achieved.

7. Agree On Ways To Communicate Consent When Verbalizing Isn't Possible

There are situations in sex when both people can't be verbal. Blow jobs are one example, as is the use of a gag, or those times when there's a pillow/stomach/boobs/whatever in the way. You need the ability to get affirmative consent even though that's happening.

If you get up to sexy stuff that restricts verbal communication, agree on another option. And make it clear that you both know what that option is before anything begins. Safe words, shaking the head, smacking the pillow, holding your hand up to stop, whatever. Make consent an active process, and alter it if your previous option doesn't work.