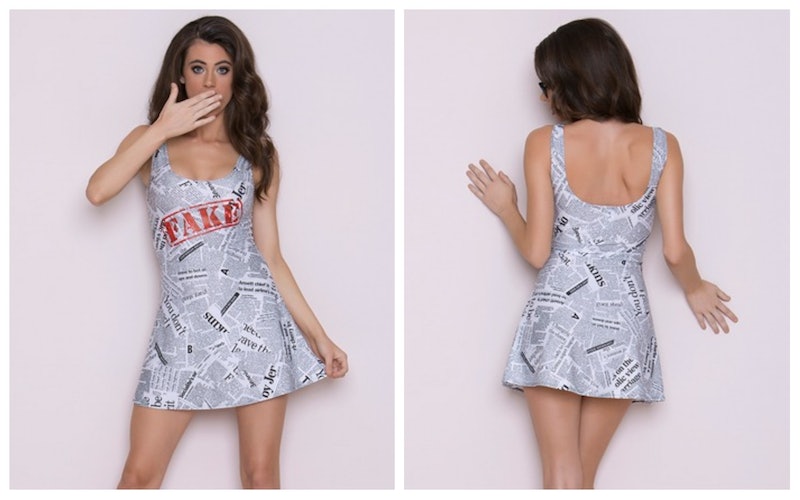 And today in news (or maybe “news?”) that should surprise absolutely no one, a sexy fake news Halloween costume exists. Because of course it does. It is peak 2017, and since Halloween is usually the time of year that everything that is Peak Whatever Year We Happen To Be In comes out to play, naturally, peak 2017 would consist of a personified Fake News doing its level best to seduce you with all its dubious charms. The metaphor is apt, is it not? That is, after all, what actual fake news does — although usually with more disastrous consequences.

Unlike most “sexy” Halloween costumes, this one looks like it’s actually pretty easy to wear; heck, it might even be downright comfortable, which is something I can always get behind. The Fake News Costume describes itself as follows:

Spread all the alternative facts in this exclusive Fake News costume featuring a white tank dress with a scoop neckline, thick shoulder straps, an allover newspaper design, "FAKE" printed in red across the bust, and a scoop back. (Glasses not included.)

Interestingly, it does not actually describe itself as sexy, so do with that what you will. It can be yours for $54.99 at Yandy; pair it with your favorite pair of heels (or flats! Or platforms! Or whatever you feel like wearing!) and you’re good to go. If you want to add the glasses, they’re known as “Sexy Secretary Glasses” and can be acquired for a mere $5.99.

Here’s the weird thing: I… do not seem to have an opinion about this costume. This is extremely unusual for me, as I tend to have opinions about everything. But I do not know whether the existence of a sexy fake news Halloween costume is good, bad, or somewhere in the grey area between them; I have reached a state of such general existential dread that all I can do is look at it, think, “Of course this exists,” shrug, and carry on. (And then pick up the phone and call my reps and senators, because that, at least, is something I can do about the aforementioned existential dread.)

In the immortal words of Cady Heron:

In an ideal world, people would be able to dress however they wanted all the time without anyone saying anything about it, but since we are sadly not there yet, we may as well take Halloween and run with it, right?

For what it’s worth, you could also always make your own sexy fake news costume; although this option requires a certain amount of skill — as Rachel Torgerson notes over at Cosmo, “You could DIY it, but it probably wouldn't be sexy anymore (if your crafting skills are anything like mine, that is) — and then where would we be?” — but then again, maybe it doesn’t. Maybe a lack of skill will just make the metaphor even stronger: Sexy fake news might look flashy and exciting on the outside, but when you dig deep enough, you find it’s just a shoddily constructed façade that’s likely to collapse under the tiniest bit of pressure.

Actually, maybe I do have an opinion about Sexy Fake News: It is the perfect Halloween costume for the 2017 season.