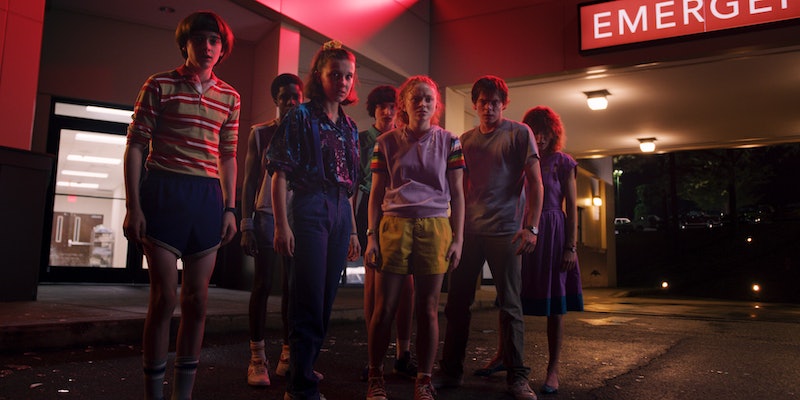 If you've been watching Stranger Things, then you can probably separate the good guys from the bad guys pretty easily. The kids from Hawkins are obviously Team Good, and the Mind Flayer (by way of Billy in Season 3) is categorically bad. Here's the thing, though: A new Stranger Things 3 theory suggests that the *true* villain has yet to be revealed, and — spoiler alert! — the Jonas Brothers are involved.

Yes, you read that correctly. Your favorite recently-revived boy band is, according to this mathematical theory, connected to the third season of Stranger Things. Wild, right? Is your mind blown? It should be. Because if you missed out on the connection upon first watch, you're not alone.

The Stranger Things-Jonas Brothers theory all boils down to some super sneaky math, and comes from a fan on Tik Tok named @piffpeterson, who posted a video that breaks the whole thing down. "What we do know is that Stranger Things is Netflix, which is 7 letters long. In the show, one of the main character's name is Eleven," which one might see as 7/11 — yep, just like the convenience stores. And this is just the beginning.

"Get this," @piffpeterson continues, "there are approximately 69,000 7/11s around the world," and Finn Wolfhard (who plays Mike Wheeler and is holding a candy cane in the photo shown in the video) was born on December 23rd — two days before Christmas. "Now, if we simplify these numbers just by using some simple math, we get 3,000," the fan goes on. How? Still working that out over here, honestly.

Anyway, the end game is this: In another image from the video, there are three Demogorgons. Where did they all come from? No clue. There's three of them, though, and the Jonas Brothers are a three-person band who sing songs about, 1. a candy cane (aka, a "Sucker," as some might say), and 2. the "Year 3000."

So, what that means is that the Jonas Brothers *are* the three Demogorgon, and therefore the real, true, secret — well, secret until now — villains of Stranger Things. Will they be unmasked in the fourth season? For now, that remains unclear. If your mind wasn't blown before, though, it's got to be blown now.

This whole thing is, of course, an elaborate joke, but both the Jonas Brothers' and the Stranger Things' Twitter accounts have endorsed @piffpeterson's theory (in jest). "The math here checks out," @jonasbrothers wrote in a re-tweet of the video. "yup. basic math," @Stranger_Things replied.

Again, don't bother trying to work out that "basic math." It's not going to get you anywhere. (Trust me, I tried for entirely too long before realizing that things didn't exactly, um, add up.) How hilarious would it be if the Jonas Brothers were the end-all-be-all villains, though? It wouldn't make any sense in the slightest for an innumerable amount of reasons, but this is fiction we're talking about here.

Now that you've been thoroughly fooled and confused, you can go back to life in the real world. A world where the Jonas Brothers are still pure and good and sacred, and most definitely not a part of Stranger Things.

More like this
Netflix Shut Down 'Bridgerton' S3 Rumours About A “Very Dark” Storyline
By Bustle
'GoT' Star Emilia Clarke Says She "Just Can't" Watch 'House Of The Dragon'
By Brad Witter
Ariana Grande & Kristin Chenoweth Sing A Wizard Of Oz Classic On TikTok
By Alyssa Lapid
Beyoncé & Blue Ivy Performed A "Brown Skin Girl" Duet At Her Private Dubai Concert
By Brad Witter
Get Even More From Bustle — Sign Up For The Newsletter
From hair trends to relationship advice, our daily newsletter has everything you need to sound like a person who’s on TikTok, even if you aren’t.