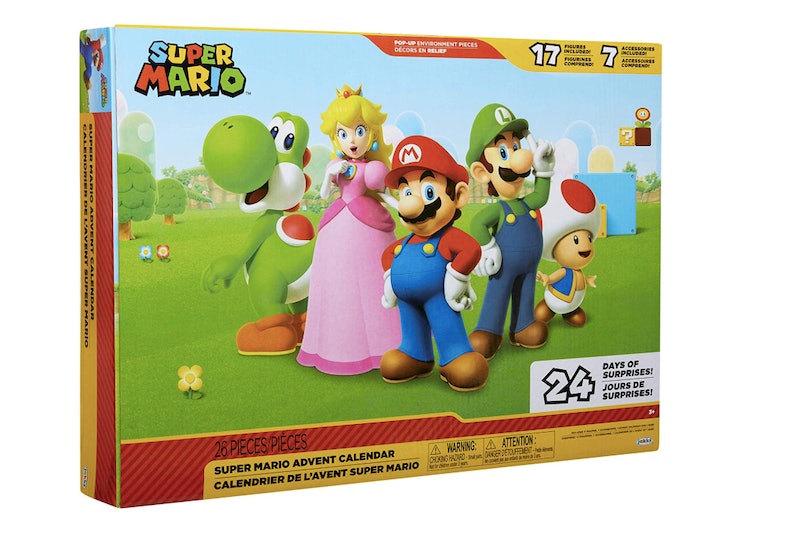 Is it a little early to be looking at advent calendars? Maybe; after all, it’s still, y’know, September. (Let me have my beloved Halloween season! Please! I beg of you!) But since advent calendars have already started to emerge anyway, whether we like it or not, I feel it’s worth drawing attention to this delightful Super Mario advent calendar. Entertainment Weekly gets the credit for finding it; as the outlet points out, it’s “the perfect gift for any gamer,” whether or not advent season is actually on the horizon. Available on Amazon, it’s sure to push all your Nintendo-oriented nostalgia buttons in the same way that, say, the Super Mario X Sugarfina collection and the Cold Stone Creamery Mario Kart menu did. Honestly, the Mushroom Kingdom seems like a pretty rad place to live — as long as Bowser isn’t kidnapping its monarch. Again. (Seriously, dude. She’s just not that into you.)

The Super Mario advent calendar is made by JAKKS Pacific, a toy company well-known for their World of Nintendo line — a collection of articulated, Nintendo-branded figurines available in a variety of sizes. Indeed, it’s these articulated figurines that you’ll find hiding behind each door of the calendar: 17 of them are 2.5-inch figurines of full-on characters (think Mario, Luigi, Peach, Yoshi, various enemies, etc.), while the remaining seven are described as “accessories” (think Super Stars, mushrooms, and so on). With 24 gifts total, the calendar will have you covered from the first of December up through Christmas Eve — or for any other 24-day period you feel like marking. Just because it’s called an advent calendar doesn’t mean it has to be an advent calendar, after all.

Historically, the period known as Advent begins on the Sunday closest to the feast day commemorating St. Andrew the Apostle (St. Andrews Day falls on Nov. 30). It last four weeks — and although its original function was to act as the preparation period for people about to convert to Christianity to get ready for their baptism, it’s now more broadly thought of as the lead-up to Christmas.

The advent calendar as we know it today draws its inspiration from a German Protestant tradition from the 19th century which involved making chalk marks on actual doors in the days leading up to Christmas. Printed advent calendars which revealed little pictures or illustrations behind each paper “door” when opened arrived in the early 20th century — and now, they could hold anything from chocolate to beauty products.

At around $50, the JAAKS Pacific Super Mario advent calendar isn’t exactly cheap — but given that your average JAKKS Pacific 2.5-inch figurine costs around $5, it’s steal for collectors. If you bought all the toys on their own, the lot would set you back $85 just for the 17 figurines, never mind what the additional cost for the seven accessories would add. What’s more, as far as modern, gimmicky advent calendars go, it more or less represents the middle ground — it’s not as affordable as the many themed sock advent calendars available these days, which are typically only around $15 or $20, but it’s also not as pricey as, say, the $155 prosecco advent calendar that’s been calling my name.

Personally, I like my advent calendars to be full of surprises — but if you really want to know what you’ll find inside this one, head on over to the r/WorldOfNintendo subreddit for a peek at an open one. I suppose if you’re gifting it to someone else, the recipient will still get to experience the surprise of finding out what’s behind each door — and you’ll get to ensure that the gift will be a good one before you hand it off to its lucky recipient. You can order it online here.