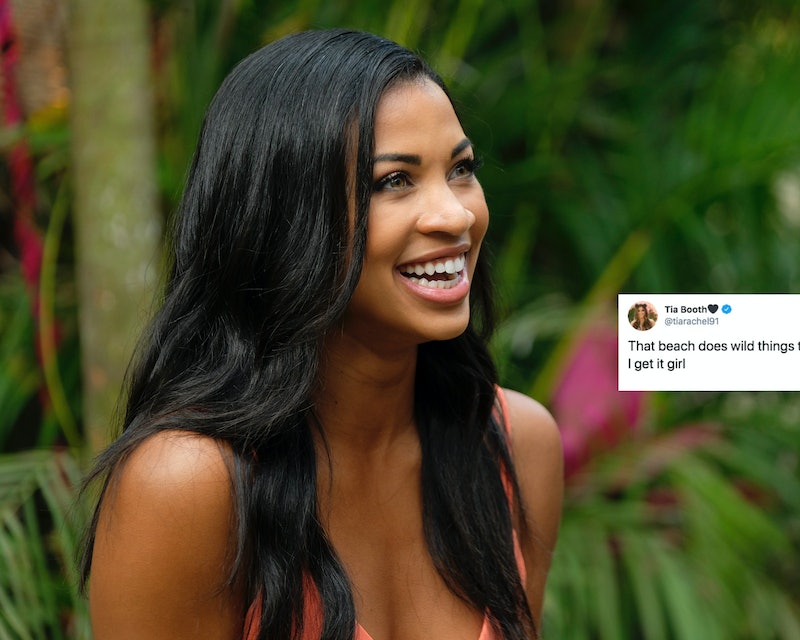 Twitter wasn't sure how to feel about Katie's cringeworthy reaction to Wills telling her he liked her on Bachelor In Paradise. But, luckily, another member of Bachelor Nation is here to explain what all those tears were about. Tia Booth's response to Katie crying on BiP puts the whole reality show experience into perspective for those who haven't actually lived through it.

The latest episode of Paradise took an awkward turn when Katie went non-verbal after Wills told her he appreciated how she was "so unapologetically herself." Sounds like a compliment, right? Well, not when you don't feel the same about the person saying it. This comment led to full on waterworks from Katie, who felt bad rejecting Wills, who hasn't had a lot of luck in Paradise. Instead of directly saying, that, though, she just ended up getting tongue-tied and telling him, "That's not my jam," through tears.

To be fair, it's not easy to tell someone you're not that into them. Especially, when you're trying to spare their feelings in front of a bunch of cameras that are following your every move. This all can make Paradise feel like something so much more stressful, as Tia, who appeared on BiP last year, pointed out on Twitter.

"That beach does wild things to your emotions!!!" Tia, who also appeared on Arie's season of The Bachelor, tweeted. "@hellokatiemo I get it girl."

Tia is no stranger to the weird island vibes of Bachelor in Paradise. On Season 5, Tia left Paradise after breaking things off with Colton, who would later became The Bachelor. In fact, he was named the Bachelor the day after their Paradise breakup aired, so yeah, there's that.

Last year, Tia talked to Glamour about whether she would do another Bachelor franchise saying, "Honestly, leaving another reunion single kind of sucks. It wears on you, knowing that you put yourself out there and tried it again and you’re still in this same position. I always learn so much about myself through this process and through this experience, but it can kind of wear on you."

That honesty might be why Tia's support was much appreciated by Katie. "Someone bring me a cot," Katie wrote. "I need a nap."

That tweet showed Katie was willing to laugh at this perplexing moment. Hence, the three crying laughing emoji. But later Katie would elaborate further on what she was experiencing in that moment that had so many fans saying "huh?"

During the episode, Katie had also taken to Twitter to try and explain what happened in Paradise. "brb: currently malfunctioning on paradise," she tweeted in jest, later adding, "SOMEONE GIVE ME THE HEIMLICH."

However, Katie's response to Tia shows that despite the editing of the episode, which included some musical cues to play up the comedy of it all, the moment wasn't all that funny. Don't worry, girl, Tia totally understands.