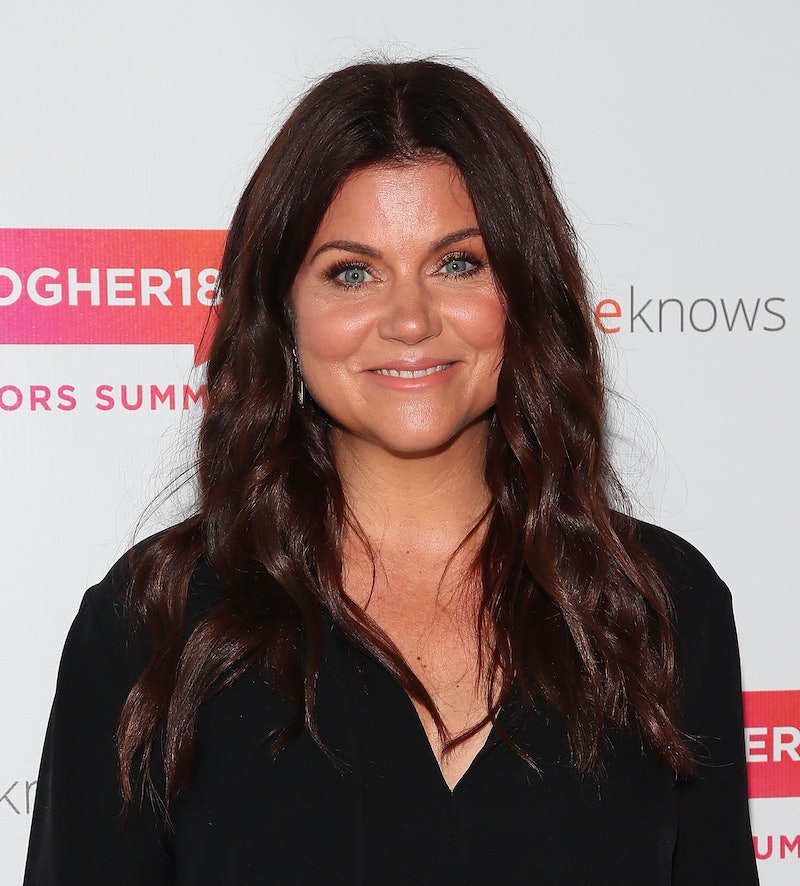 Imagine this: the one with Tiffani Thiessen as the star of Friends. Turns out, Thiessen auditioned for the role of Rachel on Friends, but the show decided the Saved By The Bell actor wasn't quite old enough to hang out with Monica, Chandler, Joey, Ross, and Phoebe at Central Perk.

While on the SiriusXM'sYou Up With Nikki Glaser on Monday, Oct. 1, Thiessen revealed she had tried out for Rachel. "Did you know I tested for Friends, for Jennifer Aniston?” she said matter-of-factly to the host, comedian Nikki Glaser, who admitted she was "obsessed" with Aniston on Friends. “I was just a little too young. I was a little too young to the pairing of the rest of them.”

Thiessen was just 20 years old when Friends started in 1994. The problem was that all six characters were all supposed to be in their mid-20s and even though Thiessen had just finishing up The College Years, the Friends gang were all working as chefs, paleontologists, actors, and transponders or whatever it is Chandler does for a living. Lucky for Aniston she fit the show's age requirement; she was 25 when the show debuted. As Entertainment Weekly pointed out, Aniston was the youngest of the Friends, but not too young.

Thiessen isn't the only one who tried out for Rachel Green. According to UPROXX, Téa Leoni was reportedly the producers' first choice to play Rachel, but she passed to star in another series called The Naked Truth. Unfortunately, that ABC series was cancelled after three seasons.

UPROXX also reported that Thiessen wasn't the only Saved By The Bell star to read for the role, Elizabeth Berkley auditioned for Rachel, too. 30 Rock's Jane Krakowski told E! in 2015 that she like so many, tried out for Friends. "I wish I had gotten that one," she said. "I actually auditioned for Rachel and didn't go very far." Fun fact, Courtney Cox was also asked to try out for Rachel. “We originally offered Rachel to Courteney Cox,” co-creator Marta Kauffman said in the book Top of the Rock: Inside the Rise and Fall of Must See TV. “But she said she wanted to do Monica, not Rachel.”

While Aniston ended up being the perfect Rachel, it almost didn't happen. Back in 2015, Aniston revealed that she almost had to be replaced because she was already cast in a CBS sitcom called Muddling Through. Aniston reportedly ended up turning down a role on Saturday Night Live to take Friends, too. Clearly, she was very popular.

Preston Beckman, who handled scheduling at NBC during Friends, told The Hollywood Reporter it was actually him who helped Friends secure Aniston by making sure her other show failed. "I put original Danielle Steel movies against it," Beckman said. "We wanted to make sure they weren't going to pick up more episodes just to be spiteful."

But don't feel too bad for Thiessen, who, like so many, is a fan of Aniston's. ("She's very, very funny," she told Glaser.) Thiessen may not have gotten Friends, but in 1994, she did get to play Valerie Malone on 90210, which is pretty iconic. Not to mention she would go on to host her own cooking show, Dinner at Tiffani's, where she gets to hang out with her former Saved By The Bell co-stars like Mario Lopez and Mark Paul Gosselaar. And she currently stars on the Netflix series Alexa & Katie.

"It's been fun to get back on that kind of, you know, sort of sitcom again," Thiessen told Glaser. After being on Saved By The Bell for six years, Thiessen's back doing sitcoms and she doesn't seem to mind that neither of them are Friends. And isn't that just kick-you-in-the-crotch, spit-on-your-neck fantastic?