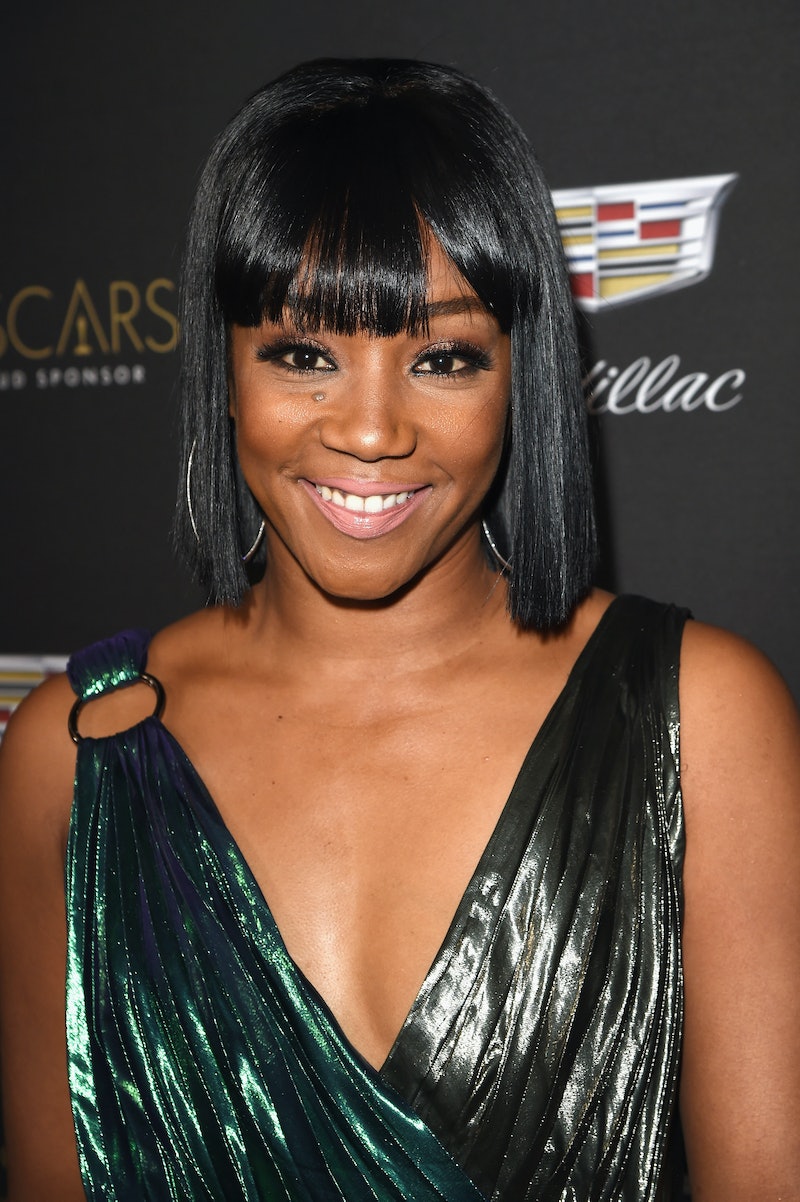 Tiffany Haddish may have just recently made it on your radar, thanks to her hilarious performance in Girls Trip last summer, but the comedian has actually been hustling for many years now. So many years, in fact, that if you happen to be a Disney fan, you may not have realized Haddish made a cameo on That's So Raven back in 2005. Her appearance may have been a short one, but it's definitely a nice reminder of how far she's come since then.

A video was recently posted to Twitter featuring a clip from a decade-old episode of That's So Raven called "When In Dome." The episode sees Raven and Chelsea paying a visit to a bio-dome when an old friend of Chelsea's comes to town. But, with Raven being Raven, the trip doesn't exactly go as planned, and the outspoken psychic ends up getting attacked by a carnivorous plant resembling Audrey II from Little Shop of Horrors.

Haddish has a small role in the hilarious episode as Charlotte, the tour guide who forewarned the group about the creepy plant's appetite — and, for anyone wondering, she was just as hilarious during her minute-long appearance in this episode as she is now.

Yeah, so you probably had no idea that she was in one of your favorite childhood shows, and it'd be totally understandable for you to try and go back and watch the That's So Raven episode in question (and all the other episodes, TBH) to see if it features any other rising stars you may have missed. It's worth noting that this isn't the only childhood favorite of yours that Haddish appeared on. In case you were an old fan of Nickelodeon's Just Jordan with Little JJ aka Jay Lewis III, you also may have noticed an appearance the 38-year-old actor made on a 2007 episode of the show called "Krumpshakers."

Haddish has worked in Hollywood for over a decade now, though many of the roles she's been able to pack onto her résumé have been smaller. Back in 2013, she appeared as herself in several episodes of BET's The Real Husbands of Hollywood, before later becoming a regular on The Carmichael Show in 2015. But her breakout role came last summer when she stole the show as Dina in Girls Trip, a comedy which also starred Jada Pinkett-Smith, Queen Latifah, and Regina Hall. The film made its theatrical debut in July, and after becoming a box-office success, it caused Haddish's star to skyrocket.

Fast forward to today, where you can pretty much see her face and hear her name everywhere. She is currently coming up off a hilarious appearance at the 90th Annual Academy Awards, and is set to host the MTV Movie & TV Awards later this year. She also just met her idol, Oprah, a few weeks ago, in case you weren't already convinced that 2018 is her year.

But, perhaps, the greatest thing to come out of her recent rise to the top has to be a brand-new (sort of) product that was created in her honor: seasoning salt. The actor recently took to Instagram to share a photo of a container of Lawry's Seasoning Salt with her name printed on it. The bottle is perfect, and it's so personalized that it even features Haddish's catchphrase, "She ready," in the top corner of the label. She captioned the photo, "Ok so look what @lawrysseasoning did they made me my own label. #SHEREADY #Ellen #Lawrys #joyfulgreens."

Who would've thought, after seeing her in an old episode of That's So Raven, that Haddish would have her own seasoning now? When you consider where she's at now, her Disney cameo is a clear reminder that becoming a sensation can happen at any point as long as you put in the work and never give up.