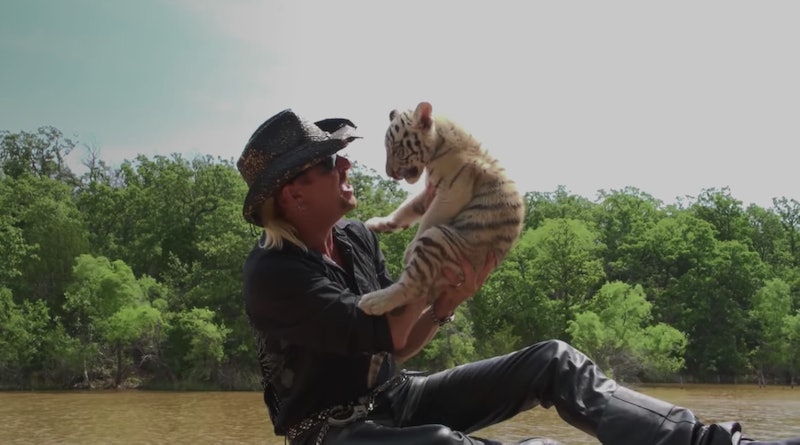 Netflix's hit new true crime series, Tiger King, features everything from Joe Maldonado-Passage's wild presidential campaign videos to his three-way wedding, but it turns out that there was still plenty of wild content left on the cutting room floor. In a new interview with The Hollywood Reporter, the Tiger King editor revealed a deleted scene proving Joe Exotic wasn't singing in his outrageous, tiger-themed music videos.

The docuseries editor Doug Abel spoke with the outlet for their Behind the Screen podcast series recently, where he revealed that there was just too much entertaining footage to include in the seven-episode series. "We do have a very funny scene where Joe is sort of revealed as not actually the singer of his own songs," Abel explained, adding that he and the creative team decided to cut it due to a "legal issue" at the last minute.

"We were worried that maybe he did actually partially sing on some of them, so we decided not to go down that road," he continued. "It was also a scene that's very, very funny, but wherever we put it, it seemed to derail the story. So that was kind of regretful that we didn't get that in there." In fact, Abel revealed that there was "a lot of material [and] characters who didn't make it into the cut at all," because the story kept expanding and unfolding even after filming had wrapped.

"We maintain a list that we call the 'orphan list' and it was really just all these scenes that we knew were lovely and would love to get in, but couldn't," Abel said.

Apparently, he had already started editing Tiger King when Maldonado-Passage's husband, Travis, died suddenly and the former zookeeper met his new husband, Dillon Passage. That set off a chain of events that convinced the team to start filming again, and forced Abel to make the decision to recut episodes and shift the focus of the series. One of the biggest casualties of the final cut was Jeff Lowe and his relationship with fellow zookeeper Tim Stark. According to Abel, Lowe would have played a bigger role in the series, but that story didn't have a neat ending.

Despite having so much wild footage that he had to re-edit the series, Abel admitted that he and the rest of the Tiger King team didn't expect the show to become a full-blown phenomenon. "We weren't sure if people were going to make it past the first episode or two. We just thought this is just too weird," he recalled, adding that they didn't have any test screenings before the March 20 premiere. "[The reaction] is definitely a surprise to me and I know the whole crew. So, [I] did not expect that, no."

Thankfully for fans who just can't get enough of the outrageous story, Lowe and Passage recently revealed that Netflix is working on a bonus Tiger King episode that will likely be released on the streaming service soon. "It's going to be a live episode, kind of like a reunion," Passage told Andy Cohen on his SiriusXM radio show on April 6, though he added, "Netflix didn't contact me to apart of that." Netflix has not yet confirmed this bonus episode, or hinted at what it will contain, but Abel's comments do make it clear that there's still so much more to the story. And the fans would like to see it.

More like this
Bachelor Nation's Blake Horstmann Is Dating 'Love Is Blind' Star Giannina Gibelli
By Jake Viswanath and Radhika Menon
Move Over, 'Sunset'! The Drama-Filled Trailer For 'Selling The OC' Is Here
By Nola Ojomu
Pete Davidson Pops Up In This Hidden Scene From The Kardashians Season Finale
By Jake Viswanath
Kim Kardashian Reveals The First Text She Sent To Pete Davidson
By Jake Viswanath
Get Even More From Bustle — Sign Up For The Newsletter