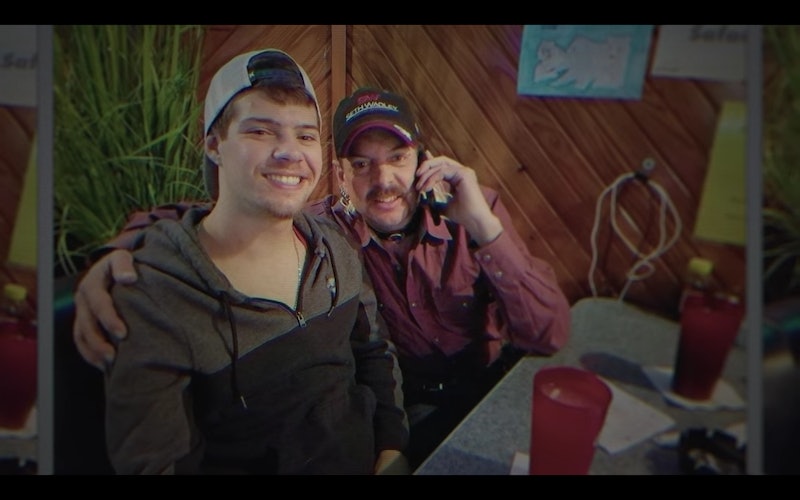 Netflix's wildly popular true crime series, Tiger King, has earned mixed reviews from many of the people featured in the documentary, but one of the show's participants enjoyed watching it as much as everyone else. During a recent interview with Sirius XM 's Andy Cohen Live, Joe Exotic's husband, Dillon Passage, shared his thoughts on the Tiger King documentary and revealed that he's actually a big fan of the outrageous series.

The 24-year-old married the former zookeeper — whose real name is Joe Maldonado-Passage — in December of 2017, but he actually learned a lot about his husband's feud with Carole Baskin from the series. "The producers, they put the story together very, very well, I think," Passage told host Andy Cohen during the interview. "They stayed true to the entire storyline. And I even learned a lot of things I didn't know about Carole and Joe's feud, because I try to stay out of his business."

While Passage enjoyed watching the documentary for the first time, Baskin slammed the Tiger King producers for their "salacious and sensationalized" series in a blog post on March 22. In particular, the Big Cat Rescue founder took issue with the series' suggestion that she may have been involved in the 1997 disappearance of her second husband, Jack "Don" Lewis. "They did not care about truth. The unsavory lies are better for getting viewers," Baskin wrote. (Myrtle Beach Safari owner Doc Antle, who appears briefly in the series, has also criticized Tiger King.)

In addition to sharing his thoughts on the documentary, Passage also opened up about his relationship with Maldonado-Passage. "I met him a few months after Travis [Maldonado] passed away," he explained, referencing the tragic and sudden death of Maldonado-Passage's third husband in 2017. "So we first started chatting on Grindr in Oklahoma." While the documentary supposedly captured the pair's first date, at a parade during Maldonado-Passage's gubernatorial campaign, Passage revealed they actually met the night before at a bar that the former zookeeper owned.

"Me and my cousin went down to the safari bar, which was a little restaurant bar he had about half a mile away from the zoo, and he sang to me — he did karaoke that night," Passage recalled. "He was just super sweet to me and he came off as genuine and a good, down to earth guy. He's very charismatic." Just two weeks later, he and Maldonado-Passage tied the knot in a small ceremony at the beach. And Passage remains committed to his husband, despite all of their current legal issues.

In fact, despite the fact that Maldonado-Passage is currently serving a 22-year prison sentence after being convicted of murder-for-hire and various animal rights violations, Passage revealed that the pair "speak three to five times every day" on the phone.

While Tiger King may have launched Passage and his husband into the spotlight, it's clear that the 24-year-old is committed to keeping a low profile — and is equally committed to supporting Maldonado-Passage, no matter what.

More like this
Here’s Everything Coming To & Leaving Netflix In October
By Jake Viswanath
Shaina Explains Why Natalie’s 'Love Is Blind' Text Claims About Shayne Have “No Validity”
By Grace Wehniainen
‘The Ultimatum: Queer Love’ Is Officially On The Way
By Radhika Menon and Kadin Burnett
Kendall Jenner Thinks Tristan Thompson "Wanted To Trap" Khloé With Another Baby
By Jake Viswanath
Get Even More From Bustle — Sign Up For The Newsletter