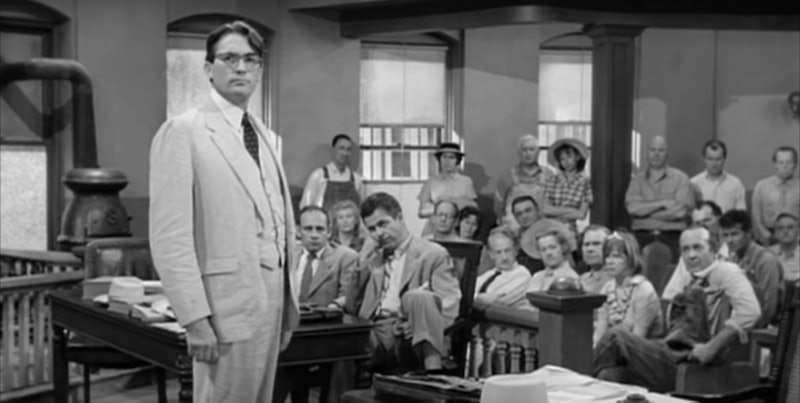 With more than four million votes cast, the search is finally over, and To Kill a Mockingbird is the winner of PBS's Great American Read. Harper Lee's Pulitzer Prize-winning 1960 novel remains a beloved entry in the American literary canon, despite frequent challenges to its presence in schools and libraries. Unfortunately, America's acceptance of racism, domestic abuse, sexual violence, and an unjust criminal system, as depicted in To Kill a Mockingbird, resonate all too clearly today. Yet, the victory of Lee's novel over a shortlist of 20 books by all-white authors is hardly revolutionary, even if it was one of 12 shortlisted titles written by women, because the pernicious endurance of its white savior narrative has become tiresome and dangerous.

Set in the fictional town of Maycomb, Alabama, To Kill a Mockingbird centers on the childhood recollections of Jean Louise "Scout" Finch, whose father, Atticus, took on the role of public defender to Tom Robinson: a black handyman who has been falsely accused of raping the young and impoverished Mayella Ewell.

To Kill a Mockingbird might be the Great American Read by popular vote, but its status as a white savior narrative means, by default, that its popularity should not go unchallenged. As The Boston Globe pointed out on the occasion of Lee's death in 2016, "Nearly every student in the United States reads the book at some point in middle or high school — and has for decades — which means that in an increasingly divided nation, reading To Kill a Mockingbird is perhaps as close to a common experience as many Americans have."

Yet the students who read To Kill a Mockingbird in middle and high school aren't reading a story about black Americans' experience in the Jim Crow South. They're reading about a little white girl who becomes aware of racial difference — not prejudice, and certainly not discrimination — when a black man is wrongfully convicted and killed. She moves on with her life. His family does not have that option.

In 2018, Americans should be reading — and teaching — more nuanced novels about racism than To Kill a Mockingbird. "Read another book" isn't suited just to Harry Potter analogies, but to the country's obsession with Lee's first novel. Nearly 60 years later, Maycomb's problems are still problems.

Let's focus for a second on Atticus Finch, who fails to secure an acquittal for his client. Still, his defense of Tom cemented him for decades as an upstanding progressive in the minds of white readers. Then Go Set a Watchman happened.

The sequel to To Kill a Mockingbird, released 55 years after Lee's first novel and to major controversy, Go Set a Watchman centered on the adult Jean Louise returning home to Maycomb to visit Atticus, only to find that he is a far cry from the paragon of morality she remembers. As Bustle writer Stephanie Topacio Long pointed out in her pre-release coverage of the novel, Go Set a Watchman "reveal[ed] that Atticus was previously involved with the Ku Klux Klan and has joined a council fighting against desegregation." Go Set a Watchman forced white readers to confront what readers of color already knew: To Kill a Mockingbird has a racist "hero."

I mean, think about it. Atticus, the judge, and the all-white jury know exactly what goes on in Mayella Ewell's home. Her father is a violent drunk who sexually abuses his daughter, and with his children's mother hardly mentioned, it is, sadly, not much wonder where some of Mayella's younger siblings came from. Although Atticus hints that the bruises on the right side of Mayella's face may have come from her left-handed father, he never explicitly accuses Bob Ewell of beating his daughter, nor does he point out that Bob is the only person in the situation who is capable of raping Mayella. Everyone in Maycomb is content to let Tom die on principle, both to discourage black men from entering white homes, and to avoid any address of the rampant abuse and sexual misconduct going on in the accuser's home.

Not much has changed since 1960. Police officers kill black Americans with near impunity. Bragging about sexual violence isn't enough to prevent a man from becoming president, or to prevent him from nominating someone accused of sexual misconduct to the highest court in the land. Americans can cling to To Kill a Mockingbird all they want, but has anyone really learned anything from the novel's depiction of our country's ugliness?

If anything, readers look away from it. Just like the residents of Maycomb, readers ignore the problems in their own backyard, and cling to the past for guidance. If readers want to address institutional racism, they've got to stop looking at it from the perspective of those who benefit from it. Why are children reading To Kill a Mockingbird, a book by a white woman, and calling it a day on the anti-racist curriculum? Surely something like Angie Thomas's #1 New York Times bestselling novel The Hate U Give or Jason Reynolds and Brendan Kiely's All American Boys — you know, books written or co-written by black authors about children growing up black in the contemporary U.S. — would be more relevant to students' lives today.

Of the Top 20 novels in the Great American Read, 12 were written by women, and zero by authors of color. In fact, only three books by writers of color cracked the Top 50. The highest-ranked book by a non-white author is Alice Walker's The Color Purple (No. 27), followed by Alexandre Dumas' The Count of Monte Cristo (No. 41) and Amy Tan's The Joy Luck Club (No. 42).

The U.S. has a race problem. It'll take more than a book about a white savior to fix it.