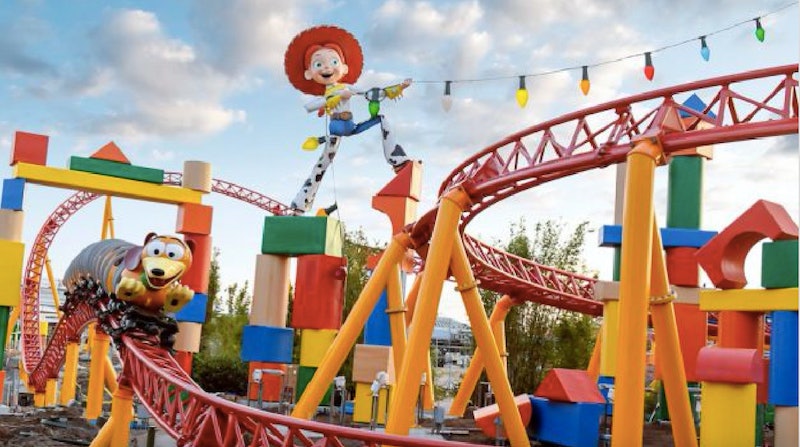 If you’re a Disney fan, you’re probably already well aware that Toy Story Land, a brand-new expansion at Walt Disney World in Orlando, Fla., opens this weekend. What you may not know, though, is this: Toy Story Land’s Green Army Patrol includes women, a recent revelation which quietly smashes a sizeable barrier. Although rumors about the inclusion surfaced fairly recently, Disney World confirmed the news to People Magazine today — and it’s a big win for representation, for kids and adults alike.

According to the fan-run Disney Tourist Blog, the Toy Story Land addition to the Disney’s Hollywood Studios park was first announced in 2015 at the D23 Expo — the massive Disney convention that occurs in Anaheim, Calif. every other year. (Since 2010, it has rotated years with the smaller Destination D event, reports the Los Angeles Times.) Similar areas already existed at several other Disney parks at the time; Walt Disney Studios Park in Paris and Hong Kong Disneyland had both played host to Toy Story Lands at their respective parks since 2010 and 2011. Shanghai Disneyland also opened a Toy Story Land in April of this year — and on June 30, Walt Disney World's version will officially begin welcoming guests.

The premise at all of these lands is that visitors have shrunk down to the size of Toy Story human Andy’s toys, setting them down in Andy’s backyard for some quality playtime — not unlike what used to be the case with the Honey I Shrunk The Kids! Movie Set Adventure that once took up real estate at Disney’s Hollywood Studios. (The long-standing attraction was demolished in 2016 to make way for Star Wars: Galaxy’s Edge.) The land is slightly different at each park, but in Florida, the main attractions are the Slinky Dog Dash roller coaster, Alien Swirling Saucers, and the existing Toy Story Mania! ride that originally opened at the park in 2008.

The draw of Toy Story Land, however, goes beyond simply the rides; the immersive quality of the area is set to make it a blast simply to wander around. Giant Tinker Toys, human-sized building blocks, and a massive Jenga tower atop which Rex, the dinosaur voiced by Wallace Shawn in the Toy Story movies, is perched dot the landscape — and favorite characters from the franchise roam freely. Jessie, Buzz, and Woody are all in attendance — and so, for that matter, are the Green Army Patrol.

Led by Sarge, the troop of little plastic army figurines has been a mainstay of the Toy Story franchise ever since the first film, which was released in 1995; however, they’ve pretty much always been dudes. This is disappointing, although not surprising: The toys themselves, which date back to 1938, have also traditionally only depicted men, and while women have been active in the U.S. military since the Revolutionary War, they’ve faced a huge amount of exclusion throughout American history. It was only in 2015, for example — just three years ago — that the Pentagon announced that all combat jobs would finally be open to women.

However, on June 25, rumors began swirling that the Green Army Patrol characters who would be present in Toy Story Land might be smashing that particular glass ceiling, if only within the fictional world of the park. “According to multiple Cast Members, a few Green Army Women have been spotted walking around, getting ready for the land’s debut on June 30,” reported Blog Mickey at the time. “While we’re not sure what role the Green Army Women will play in the land, we’re excited to see that they’ve made their way to Andy’s Backyard.”

It only took a few days for confirmation to come through: Yes, Toy Story Land’s Green Army Patrol will include women. “This is important to all of us — it’s the right thing,” Tom Vazzana, show director of live entertainment for Toy Story Land, told People on Thursday. The change is even visible in the press material for the land: Official photography depicting the Green Army Patrol Walt Disney World has made available very clearly features soldiers of all genders, not just men.

These characters are also now what are known as “face characters” — that is, their faces aren’t hidden behind masks or mascot heads, allowing them to talk freely to park goers as they interact with them. (The Disney Princesses are all coveted face character roles, for example.) Previously, Green Army Patrol characters had included mesh face coverings as part of their costumes, reports People, which functionally made them “atmosphere characters” like Mickey, Minnie, and Disney's other mascot characters. “Now,” said Vazzano, “everyone’s able to talk and interact.”

Here's what the mesh face coverings used to look like:

According to the Disney Parks Blog, the Green Army Patrol will be present in two different ways in Toy Story Land: The Green Army Drum Corps “marches through the backyard several times a day, playing lively percussion sets filled with awe-inspiring drum sequences,” while “elsewhere, Sarge and his Green Army Patrol are looking for recruits to enlist in a fun and interactive boot camp for all ages.” Folks who interact with the Drum Corps may end up drumming along themselves; meanwhile, those who hang out with Sarge’s Patrol might get to play a game of “Sarge Says” (which, I presume, is a version of Simon Says).