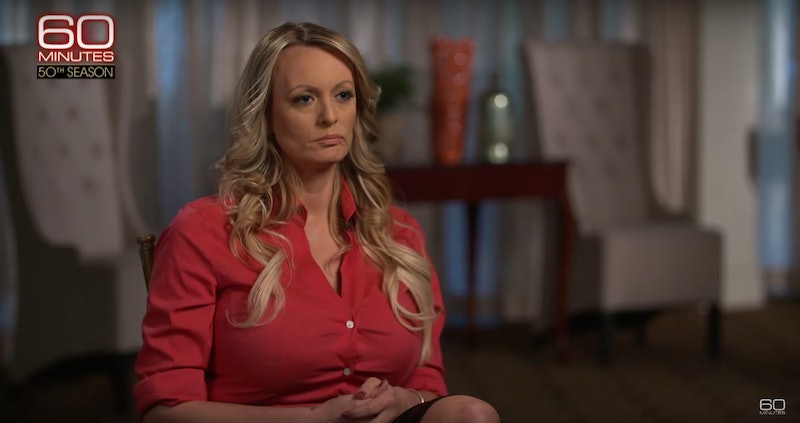 For anyone keeping tabs on news about the affair Donald Trump allegedly had with an adult film star in 2006, Sunday evening was heavily anticipated. That's because the transcript of Stormy Daniels' 60 Minutes interview about Trump discloses never-before-heard details about their alleged relationship, which Trump's spokesman has vehemently denied. While you might consider some of the details to be "juicy," others are downright concerning. Bustle has reached out the White House for comment from Trump.

Early on in the interview, Daniels, whose given name is Stephanie Clifford, described exactly how she and Trump began talking — and how she ended up in his room. Reportedly, Trump was busy talking about himself when they first met, until she asked him if that strategy usually works with women. Then, she says she took the magazine he was supposedly boasting about — which featured his face on the cover — and swatted him with it. When he reportedly suggested that she join The Apprentice, she says she saw it as a business opportunity. And yes, she claims she also asked him about his wife Melania. He reportedly told her not to worry.

Though she says she was zero percent attracted to Trump, who would have been 60 years old at the time, she insisted to Anderson Cooper that the sex was consensual. Why she supposedly went through with Trump's reported advances, though, is especially troubling. She said she felt like she "had it coming for making a bad decision for going to someone's room alone."

That's not the only concerning bit from the transcript though. Aside from supposed details about that night, Daniels also explained how she was reportedly threatened and scared into staying quiet about the alleged affair.

CLIFFORD: Ummm (LAUGH) it started off-- all about him just talking about himself. And he's like-- "Have you seen my new magazine?

COOPER: He was showing you his own picture on the cover of a magazine.

CLIFFORD: Right, right. And so I was like, "Does this-- does this normally work for you?" And he looked very taken-- taken back, like, he didn't really understand what I was saying. Like, I was-- does, just, you know, talking about yourself normally work?" And I was like, "Someone should take that magazine and spank you with it." (LAUGH) And I'll never forget the look on his face. He was like—

COOPER: What-- what was his look?

CLIFFORD: Just, I don't think anyone's ever spoken to him like that, especially, you know, a young woman who looked like me. And I said, you know, "Give me that," and I just remember him going, "You wouldn't." "Hand it over." And-- so he did, and I was like, turn around, drop 'em."

COOPER: You-- you told Donald Trump to turn around and take off his pants.

COOPER: And did he?

CLIFFORD: Yes. So he turned around and pulled his pants down a little -- you know had underwear on and stuff and I just gave him a couple swats.

COOPER: This was done in a joking manner.

CLIFFORD: Yes. and-- from that moment on, he was a completely different person.

CLIFFORD: He quit talking about himself and he asked me things and I asked him things and it just became like more appropriate.

CLIFFORD: Yeah. he was like, "Wow, you-- you are special. You remind me of my daughter." You know-- he was like, "You're smart and beautiful, and a woman to be reckoned with, and I like you. I like you."

CLIFFORD: I realized exactly what I'd gotten myself into. And I was like, "Ugh, here we go." (LAUGH) And I just felt like maybe-- (LAUGH) it was sort of-- I had it coming for making a bad decision for going to someone's room alone and I just heard the voice in my head, “well, you put yourself in a bad situation and bad things happen, so you deserve this.”

COOPER: And you had sex with him.

COOPER: You were 27, he was 60. Were you physically attracted to him?

COOPER: Not at all?

COOPER: Did you want to have sex with him?

COOPER: It was entirely consensual.

COOPER: You work in an industry where condom use is-- is an issue. Did-- did he use a condom?

COOPER: Did you ask him to?

CLIFFORD: No. I honestly didn't say anything.

The entire transcript can be found on CBS News' website. Daniels added that following the alleged affair, she did an interview with In Touch magazine in May 2011. However, it was never published because Trump's lawyer, Michael Cohen, reportedly threatened to sue the outlet. Daniels claimed that she was next. Shortly after In Touch decided not to publish the interview's content, she was reportedly threatened by an unknown man while walking into a workout class with her infant daughter. And that's just part of the reason she waited over a decade to speak out openly about the alleged affair, which she believes could actually affect the 2020 election now.

At the very end of the interview, Daniels claimed Trump absolutely knows she's telling the truth. As Cooper mentioned though, some have questioned her credibility because of how many times she's denied the alleged affair. In response, Daniels pointed out that she has much more to lose than to win by speaking out at this point in time.