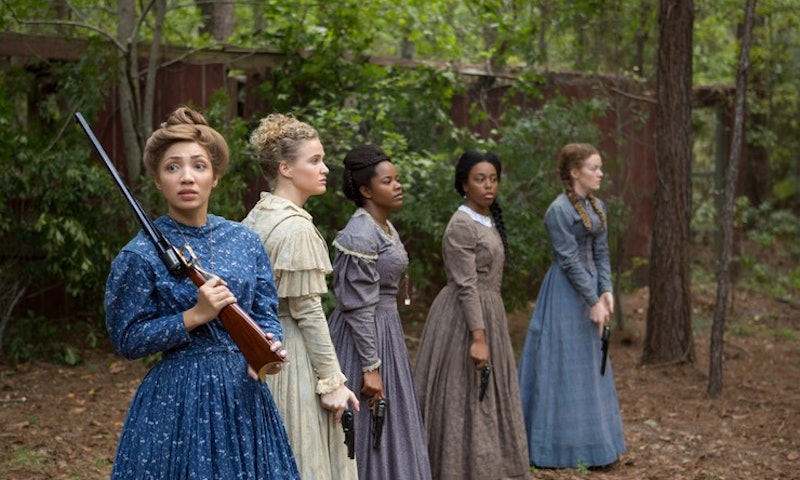 Since being bought by Sinclair Broadcast Group, WGN America has reportedly decided to do away with certain television programs, according to the Washington Post. And as it turns out, one of my Wednesday night obsessions was on that list. That's right, something incredibly disappointing happened — Underground has been canceled. But fans shouldn't lose hope yet. Just like other previously canceled phenomenons, such as Nashville and Grey's Anatomy, there's nothing a little fan petition can't handle.

Cast members Alano Miller and Jurnee Smollett-Bell jumped on their social media pages to share the sad news with fans. Meanwhile, creator Misha Green reassured those inquiring that "the plans have changed, but the fight ain't over," using the words of Aisha Hinds' character and Underground Railroad pioneer, Harriet Tubman. Executive producer John Legend also refuses to fight this battle sitting down. The musician took to social media to express just why Underground deserves a place on the small screen, encouraging viewers to join the discussion as well.

The search for a new network home is on the up and up, however. According to Deadline, OWN and Hulu may reportedly be interested in adding the period drama to their line-ups. And I think that calling either home would be good for the show.

In my opinion, Underground would be fitting for OWN. The Oprah Winfrey Network is known for carrying content that identifies with the black American experience. Having the period drama join its ranks would make so much sense. I, for one, would love a little back-to-back action between Ava DuVernay's Queen Sugar and Underground on a week night. Could you even imagine? And, of course, Hulu is no stranger to airing thought-provoking content. So, the historical anthology could just as easily fit in there too. It's pretty much a win-win for the Underground family.

But, as Legend and Green stated, it's up to fans to let their favorite networks and streaming services know that they want Underground to stick around. After all, Season 2's finale is no way to close this tale. It served as more of a bookmark than as rolling credits, for sure. There's still more story that needs to be told.