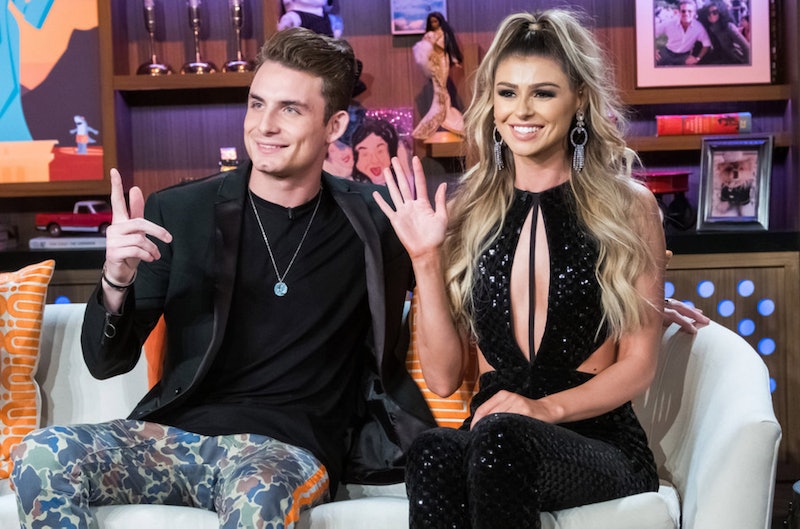 Say it with me now: It’s all happening. Inventor of the puppy shower and Vanderpump Rules supporting player Raquel Leviss works at SUR now. On Thursday, April 25, SUR co-owner Guillermo Zapata posted a photo of Raquel standing in front of the restaurant in a SUR uniform on Instagram Stories, welcoming the newest SURver to the “family.” Shortly after Guillermo made this announcement, Raquel shared the same picture and wrote, “SURprise!!!!! You’re looking at the newest addition to SUR’s wait staff! May I take your order?” Frankly, it would be my honor.

Pump Rules viewers were first introduced to Raquel all the way back in Season 5 after she began dating DJ James Kennedy, and wow, has she ever made the most out of that supporting character role. We've seen her react to cheating allegations on several separate occasions. We've seen her clash with Lala Kent. We've seen her throw a puppy shower with James for their Goldendoodle, Graham Cracker. We've heard her explain why she does not like Winnie-the-Pooh.

But up until now, we had not seen her work at the Sexy Unique Restaurant that is the beating heart of The Real Housewives of Beverly Hills spinoff. This this server job will be the first time she has worked at any of Lisa Vanderpump's establishments (aside from her brief stint at Vanderpump Dogs, that is). James, on the other hand, knows a thing or two about working at (and getting fired from) LVP's restaurants.

Wow. Raquel now has the very thing that James spent almost all of Season 7 trying to secure: a gig at SUR.

Not to get all conspiratorial, but the timing of Raquel’s hiring does not seem like an accident. Pump Rules filming season is just around the riv-SUR-bend, and adding Raquel to the restaurant's staff list right before production starts feels like a way to shake the show up a bit. (Pump Rules has not officially been picked up for an eighth season, but come on. There is no way Bravo is going to pull the plug on this show before Jax Taylor and Brittany Cartwright get married at Versailles.) (No, not that Versailles.)

It is no secret that Raquel is not super close with the rest of the Pumpers, but who knows what will happen when they all end up serving not-muddled cocktails to thirsty tourists in that labyrinthian restaurant together! Will working at SUR will give her the chance to finally ingratiate herself with the rest of the cast? Or will she continue to be left out because a majority of the Pumpers cannot stand her boyfriend? Will she be made a main cast member? Will her name make it into the opening credits? Will SUR add a cocktail called something like "Bambi-eyed Bellini" to the menu? Will James ever DJ at SUR again? Will Graham continue to shine?

Well, let's just get that last question out of the way: Of course Graham the Goldendoodle will continue to shine. He is a star. Have you seen his Instagram account? It is some good paw-ntent.