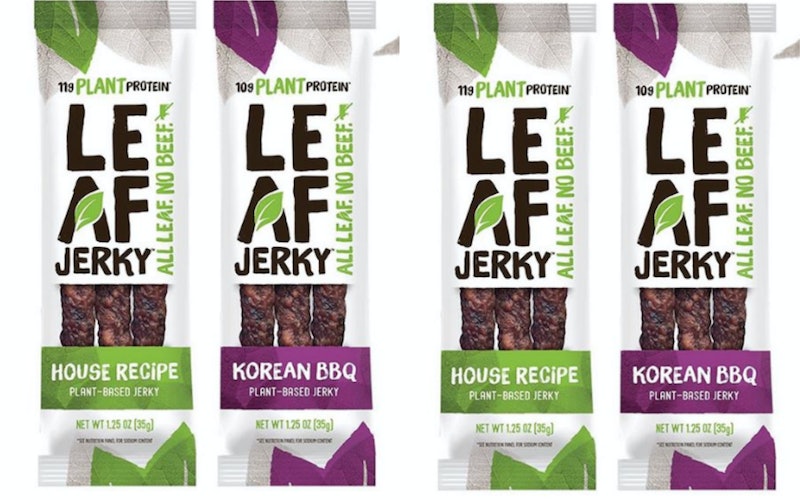 If you love puns and plant-based diets, then welcome to your very niche crossover episode. While vegan meat substitutes have become a booming industry in the last few years, we have a new addition to the scene that looks pretty darn exciting. You can now get new plant-based jerky with a simply delightful name. That's right — move over beef jerky, because it's time for Leaf Jerky. Leaf Jerky is the new vegan jerky offering from Kellogg's and it is the greatest of veggie name puns.

Their website shows that the jerky will be available in a Cracked Pepper and Herb flavor, and the company's Instagram is showing a Korean BBQ flavor, so expect some exciting options coming your way. It's made of a soy-based meat alternative that packs a protein punch, so if you like a hearty vegan snack on the go then this may be the answer for you. The company also promises sustainable ingredients and recycled packaging for their jerky.

"A year ago, I had the idea to create a vegan, portable protein snack that was delicious enough to share with my meat-loving husband," Leaf Jerky creator Amy Shouldice explains on their website. "Kellogg gave me the opportunity to pitch the idea and shortly after I was given the green light to make it a reality! So I got together with a small group of work friends and with our company’s support, we founded Leaf Jerky. We set out to create a brand that’s sustainable — from the footprint of our ingredients, to our recyclable packaging, to our support for the next generation of sustainable farmers."

Unfortunately, you may be waiting a while to get your hands on this delicious jerky. According to VegNews, the product is at tradeshows and will be tested later this year, but the major distribution is expected in 2020.

If you're a fan of plant-based meat alternatives, then you've probably been very busy trying everything that's out there. One of the greatest additions to the fast food scene has been the Impossible Whopper, Burger King's veggie take on the classic. And just recently there was the test of KFC's plant-based Fried Chicken with Beyond Meat, which threw the chicken wars going down on Twitter for a loop.

But what if you're a veggie with a sweet tooth rather than a savory one? Well, no fear — because there are so many options out there. I was very excited at the recent launch of Halo Top's Vegan Chocolate Peppermint Crunch flavor. Or you can go straight for the dream and get yourself some Ben & Jerry’s Cookie Dough Chunks — which include a vegan option, because the world is a beautiful place sometimes.

So whether you want to go sweet or savory, it's safe to say that vegan snacking options have gone through a total transformation in the past few years. But as much as taste may be paramount when it comes to choosing a snack, we can't forget that hilarious puns should also be taken into consideration. And on that score, Leaf Jerky is the best offering I've been in a long time.