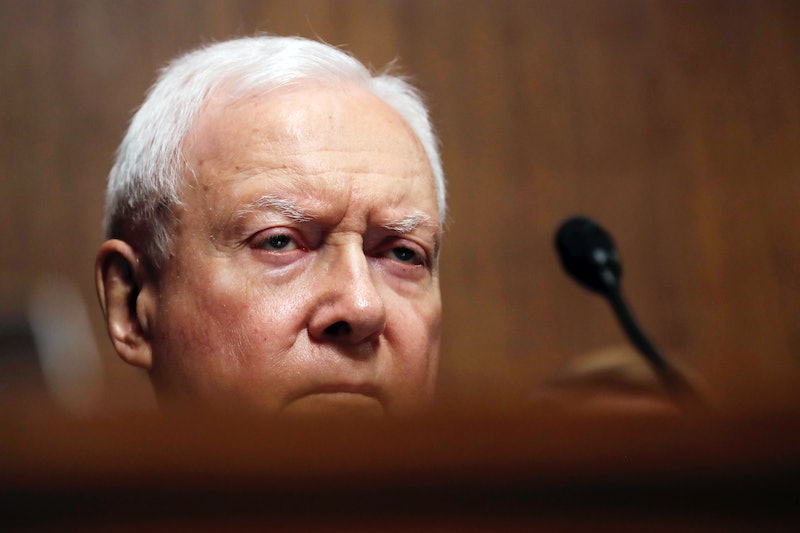 Despite backlash from Democrats, most Senate Republicans agreed on Thursday that the FBI's investigation of Brett Kavanaugh did not corroborate the multiple allegations of sexual assault made against the Supreme Court nominee. Among them was Utah Sen. Orrin Hatch, who told sexual assault survivors to "grow up" as they confronted him over his support of Kavanaugh.

According to Politico, Hatch said during a press conference on Thursday that investigations by both the FBI and the Senate Judiciary Committee yielded nothing that would verify the allegations against Kavanaugh.

"We need to confirm him right away," Hatch said.

Moments later, as Hatch was entering an elevator, a group of survivors and other women confronted him, but he did not immediately acknowledge them. Video footage of the encounter was posted to Twitter by an organization called #VoteProChoice. One of the women — whom the group identified to BuzzFeed as Kathy Beynette — wondered why Hatch wouldn't speak to the protesters.

"Why aren't you brave enough to talk to us and exchange with us?" Beynette asked Hatch.

Hatch subsequently appeared to wave off the protesters, and did not respond to Beynette. When Beynette told him not to wave his hand at her, Hatch told the protesters to "grow up," prompting outrage from the group.

"How dare you talk to women that way?" Beynette asked, as the elevator doors closed on Hatch and his aides. Hatch continued to wave his hand at the protesters as Beynette addressed him, and his security detail told the group to stop holding the door or risk arrest. When they tweeted video footage of the incident, #VoteProChoice claimed that Hatch laughed in the protesters' faces.

This is not the first time Hatch has come under fire during Kavanaugh's confirmation process. After Christine Blasey Ford testified before the Senate Judiciary Committee about her allegation against Kavanaugh, Hatch described Ford as an "attractive, good witness." As Hatch came under scrutiny for his word choice, his spokesperson weighed in, arguing that the senator uses the word "attractive" to "describe personalities, not appearances."

Hatch has been outspoken in his support of Kavanaugh, and has made it clear that he is eager to confirm him. However, Thursday's encounter was reminiscent of an incident that took place last week on Capitol Hill, when two sexual assault survivors confronted Arizona Republican Sen. Jeff Flake as he also entered an elevator. While Hatch has been firm in his support of Kavanaugh, Flake — who is not running for reelection — has been undecided on the matter.

One day after Ford testified before the committee, two women, Ana Maria Archila and Maria Gallagher, approached him as he was entering an elevator and blocked the door from closing.

“What you are doing is allowing someone who actually violated a woman to sit on the Supreme Court," Archila told Flake, as he appeared unable to meet her eyes. "This is not tolerable. You have children in your family. Think about them.”

During the hearings for Ford and Kavanaugh, numerous survivors came forward to tell their own stories. Some called into C-SPAN during Ford's testimony, while others directly confronted senators like Hatch, Flake, and South Carolina Sen. Lindsey Graham. However, despite the thousands of protesters who marched against Kavanaugh on Thursday, and the extensive criticism from Democrats, Senate Republicans appear set on their plan to conduct a full-floor vote on Kavanaugh's confirmation over the next few days.