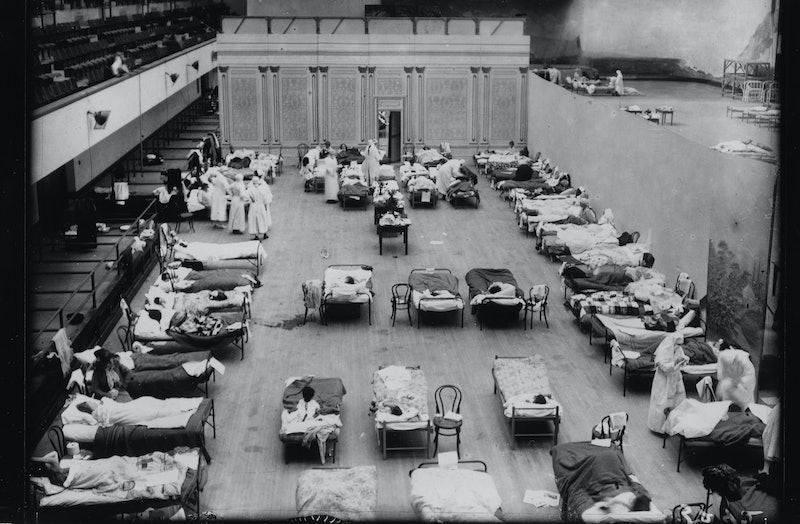 With millions of people testing positive for COVID-19 worldwide, and the UK's own infection rate reaching high levels in a few short months, the speed at which the coronavirus is spreading has been compared to a 1918 virus pandemic, the "Spanish flu." Much like COVID-19, the Spanish flu caused an unprecedented disruption to modern life. Over the course of two years, it claimed approximately 50 million lives worldwide. Naturally, the comparisons do not inspire optimism for those already dealing with statistic fatigue and coronavirus-induced-anxiety. But are the comparisons warranted or wise? Bustle spoke to doctors to find out and discuss why everyone is suddenly talking about the Spanish flu.

How did the Spanish flu spread?

The first cases of Spanish flu were recorded after World War I in 1918. While it is unclear how or where it originated from, it wasn't actually as its namesake would suggest — but that's a story for another day. Historians say it began in army camps and spread with the migration of army troops across the world as soldiers returned home. "It spread to every part of the world, affecting populations in Japan, Argentina, Germany, and dozens of other countries," details The New York Times. Like COVID-19, sneezing, coughing, and face-touching were said to be the main ways in which the virus spread.

Are the symptoms of coronavirus and the Spanish flu the same?

The Spanish flu mainly affected young people in their 20s, 30s and 40s — a stark contrast to COVID-19, which the elderly and those with with pre-existing illnesses are considered to be most "at risk."

Individuals who contracted the Spanish flu were said to experience chills, fever, and fatigue — and if they recovered, did so after several days. Severe cases, though, presented with pneumonia, shortness of breath, and violent coughs. "Lack of oxygen meant their faces appeared tinged with blue," as per National Geographic. "Hemorrhages filled the lungs with blood and caused catastrophic vomiting and nosebleeds, with victims drowning in their own fluids."

Many of those dying from COVID-19 are succumbing to a form of pneumonia, which takes hold as the immune system is weakened from fighting the virus. But BBC Future reassures "the death rate from COVID-19 is many times lower than that of Spanish flu."

Is it wise to compare the two pandemics?

"Spanish flu and COVID-19 share a number of features that make it tempting to compare," explains Dr. Keith Grimes, a physician at Babylon Health. Speaking to Bustle, Dr. Grimes reminds us that "the world is a completely different place in 2020 than it was in 1918."

"[The Spanish flu's high mortality rate] was thought to be down to less advanced healthcare and the absence of antibiotics for treating secondary bacterial infection, as well as poorer general health of the population and malnourishment," he says.

Mass testing, contact tracing, and respiratory machines that help the most vulnerable weren't seen back in 1918. Plus, medicine and protective equipment for health professional have vastly improved over the last century.

As New York Times writer Gina Golata writes: "Doctors knew viruses existed but had never seen one. Today, however, researchers not only know how to isolate a virus but can find its genetic sequence, test antiviral drugs and develop a vaccine."

What can today's doctors and scientists learn from the Spanish flu and previous virus pandemics?

The public health measures we know now — self-isolation, shop closures, lockdown, fines for rule-breakers, etc. — are not a modern invention: Similar measures were also taken during the Spanish flu pandemic. "Social distancing isn’t a new idea," as per BBC, "it saved thousands of American lives during the last great pandemic."

Yet, mass events including citywide parades that took place after the wave of influenza passed, caused a second, far more dangerous, wave. As CNN's Holly Yan writes, "during the Spanish flu pandemic, people stopped distancing too early, leading to a second wave of infections that was deadlier than the first."

Does this mean we should be optimistic?

As I type, the UK government is in the process of starting human trials of a coronavirus vaccine at Oxford University. Health Secretary Matt Hancock confirmed in a press briefing that the manufacturing process would have previously taken "years."

According to Dr. Grimes, this gives us much to optimistic about. "The internet and modern technology means that we have been able to investigate and share new discoveries at previously unheard of speed. New drugs are being tested, old drugs reviewed," he explained to Bustle. "We can even use mobile phones to help track contacts and intelligently reduce the spread of this illness."

How did the Spanish flu end?

The fight against the Spanish flu virus ended in 1920, "as those that were infected either died or developed immunity," according to History.com.

Though bleak, "it is better to learn the lessons from the past, but not see it as a story written in stone about what happens next," says Dr Grimes. Thankfully, the Spanish flu is well in the past, and a greater future, life after COVID-19, is still in sight.

What UK Events Are Canceled Because Of Coronavirus Concerns?

What's Happening With Funerals In The UK During Coronavirus?