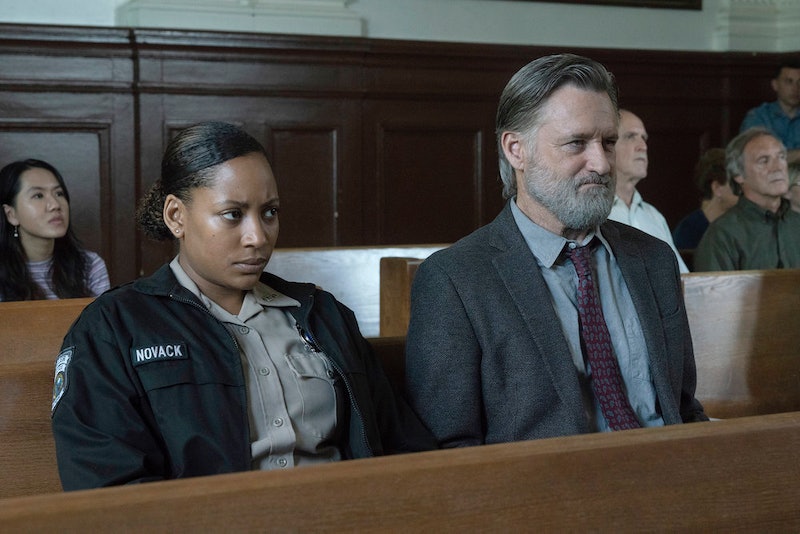 As Season 1 of The Sinner showed, you can't trust anyone on this twisty USA series. But "Part V" of Season 2 serves as an important reminder of that fact. Spoilers for the episode follow. This episode of The Sinner showed Heather's dad seeming to be keeping secrets from his detective daughter about Mosswood Grove and what really happened with Marin. Perhaps you were lulled into a false sense of security when it comes to Jack Novack, the owner of the Keller restaurant the Cobble Stone. However, Tracy Letts' character should have you suspicious about not only the town's involvement in the Mosswood cult but his own.

In "Part V," the mystery of Marin is finally starting to unravel. As Heather suspected, Marin is the biological mother of Julian. Flashbacks show that Marin conceived him with the Beacon of Mosswood, Lionel Jeffries, and that Vera was very involved in Marin's pregnancy. But how the community of Keller is intertwined with Mosswood is a new question mark in this season. Glen Fisher appeared in a video of a Mosswood "work" session that Heather found in the Niagara Falls storage in "Part IV." And once Heather and Harry Ambrose started digging around about Fisher, the townspeople — including Jack Novack — became increasingly cagey.

Back in "Part III," Ambrose joined his buddy Jack at a rotary club social. While there, some of the townspeople made their extreme feelings toward Mosswood Grove very clear, particularly Glen Fisher. Glen said, "My advice? Heavy metal and teargas. Worked at Waco." This is a reference to when, after a 51-day standoff, law enforcement attacked the compound of the Branch Davidian cult in Waco, Texas.

However, in the Mosswood video, Glen participates in "the work" by viciously beating another member up. Ambrose and Heather confront Glen about his involvement with Mosswood and he claims he's only been there once or twice for therapy. Yet, in his home, Glen has one of those ticker hypnosis machines that are used in Mosswood's work. So, Ambrose does his own off-the-books detective work and breaks into Glen's home. He finds a photo of Glen's grandfather posing with the rock that's so important to Mosswood. Ambrose also discovers that the Fishers sold the land that the Mosswood compound is on to Lionel Jeffries in 1997.

With Glen's secret involvement in Mosswood, Ambrose assumes, "There are people out here in Keller and beyond Keller who are tied to Mosswood." And it certainly seems his hunch is correct when Chief Lidell shuts down the case and orders Ambrose to go home shortly after. Then there's Heather's father, who has been subtly undermining this case the whole time.

While Jack has been hosting his old friend Ambrose, he has also been persuading Heather to take it easy on the investigation. As Heather studies photographs of lakes near Mosswood in search of Marin in "Part V," Jack removes the images from the dining room table with the flimsy excuse that he wants to eat ice cream there. It's reminiscent of "Part IV" when Jack said he needed to go back to weeding after Heather asked him about the night that Marin officially joined Mosswood. Sure, he gave Heather some insight into the labyrinth that Mosswood Grove followers believe in, but he was definitely holding out on other information.

Heather is absolutely emotionally invested in the case, but her father has wrongfully been making her detective work all about her feelings for Marin. So it's particularly hurtful when Jack says that Chief Lidell is concerned about Heather wanting to open up a case about her missing friend. That also shows that Jack and the Keller police chief are in cahoots. And while Heather might have a harder time seeing the truth about her father, Ambrose is onto him.

Jack had pushed Ambrose to leave in "Part III," but said it was out of concern for Harry being back in town. But by "Part V," Jack is more overt about his feelings toward Ambrose. "I wish you had left town sooner — things wouldn't have gone this way," Jack tells his "friend." Yet again, Jack acts like he's concerned that Ambrose has damaged Heather's career. But, as Ambrose suspects, it's probably because Jack is covering up a town-wide conspiracy. Jack denies ever going to Mosswood himself, but he does passionately defend Glen and the rest of Keller's residents.

Ambrose has a good reason to be concerned about what the townspeople of Keller are hiding when it comes to Mosswood. "Part V" hints that Jeffries had a very sinister plan involving animal sacrifice when it came to baby Julian. And Julian confesses to Ambrose that the person in the hood is not just a dream. So while the Keller townspeople may be looking to push Ambrose away, there's no way that this detective is going to let up on this case. And like with Cora Tannetti in Season 1, Ambrose may discover that unexpected people, like his old friend Jack, are more responsible for Julian's crime than it first seemed.