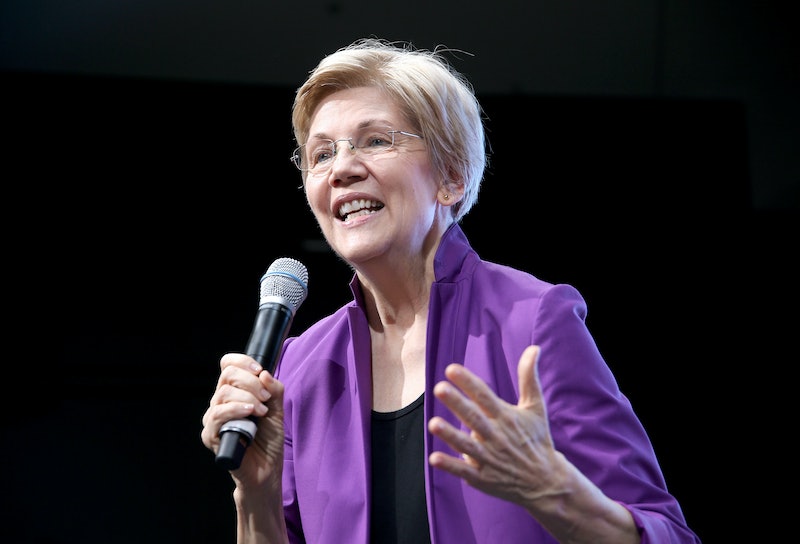 2016 was the year of the "nasty woman" — and 2017 has already brought the first rallying cry in the name of feminism, thanks to United States Senator Elizabeth Warren. Odds are you've already seen it somewhere online, but what does "Nevertheless, she persisted" mean, and where did it come from? Here's how the whole thing went down — why it was so problematic in its original form, and how it's become a monumentally important guiding principle for the resistance (and probably your next protest sign slogan, too).

On Tuesday, there was a debate regarding President Trump's nominee for Senator Jeff Sessions as Attorney General. During the debate, Senator Warren began reading a 1986 letter from Coretta Scott King opposing Sessions' nomination to become a federal judge, in which she accused him of racial bias and said that while acting as federal prosecutor, Sessions used his position of power and authority to "chill the free exercise of the vote by black citizens." (Sessions has denied the accusations, recently saying according to the Washington Post, "This caricature of me from 1986 was not correct.")

Warren was cut off by Majority Leader Mitch McConnell, on the basis of somewhat obscure and seldom-used Rule 19, which says that senators can't call each other into question on the Senate floor (and was based off of a 1902 fist fight, by the way). Afterward, McConnell said, "Senator Warren was giving a lengthy speech. She had appeared to violate the rule. She was warned. She was given an explanation. Nevertheless, she persisted."

The decision was backed up by the vote of 49 Republicans, and now Warren can't speak in the rest of the floor debate over the nomination.

Reminder: This is a debate. The point of a debate is to voice varying opinions and viewpoints, making arguments for each one. And instead of being allowed a platform, as should have been the case, Warren's voice — an important one — was silenced.

Many were quick to point out that back in 2015, when Senator Ted Cruz accused McConnell of lying while on the Senate floor, Rule 19 was nowhere to be found. Why now? Why Warren?

Senator Warren has long been a vocal advocate on numerous issues. She frequently calls out policies that benefit the rich and powerful at the expense of others. She spoke at the Women's March in Boston and has fought against attempts to repeal the Affordable Care Act. She's also, obviously, a woman. And as we already know, regardless of the people who still fervently deny it, women remain a peg lower than men in many facets of life — and that certainly includes politics.

McConnell didn't just silence a random person. He silenced a woman. An outspoken and opinionated woman in a position of power. And, I might add, he silenced Coretta Scott King in the process. He silenced concerns of racism, justice, and a potential Attorney General who could be detrimental to our already fragile and horribly divided country.

Would Warren have been silenced if she were a man? How about under the presidency of somebody else less extreme in his behaviors and beliefs? Donald Trump's campaign, after all, ran on sexist, racist, and xenophobic rhetoric, and what we've seen of his brief time in office so far has just doubled down on it all. Would this incident have occurred if someone else were in the Oval Office? We can't say for sure, of course, but my gut feeling says no, it wouldn't have. Warren is not the first woman in this position, and she won't be the last. (Hello, Rosa Parks, Malala Yousafzai, Harriet Tubman...)

But Warren, ever the pioneer, didn't let this injustice silence her. All you have to do is take a look at her Twitter page and you'll know that she won't be stopped.

Similar to "nasty woman" — a name which arose courtesy of Trump in reference to Hillary Clinton — "Nevertheless, she persisted" has become the new feminist battlecry. A negative was turned into a positive, as people around the country have celebrated Warren because she persisted, because she won't quit. McConnell's unfair decision was, in certain ways, a win for us, and shows everything that Warren did right. Once again, she has proven that she's here to stay. McConnell got his way, but Warren still came out on top — and as long as we all keep persisting... well, let's just say that we'll fight for our rights as long and as loudly as we have to.