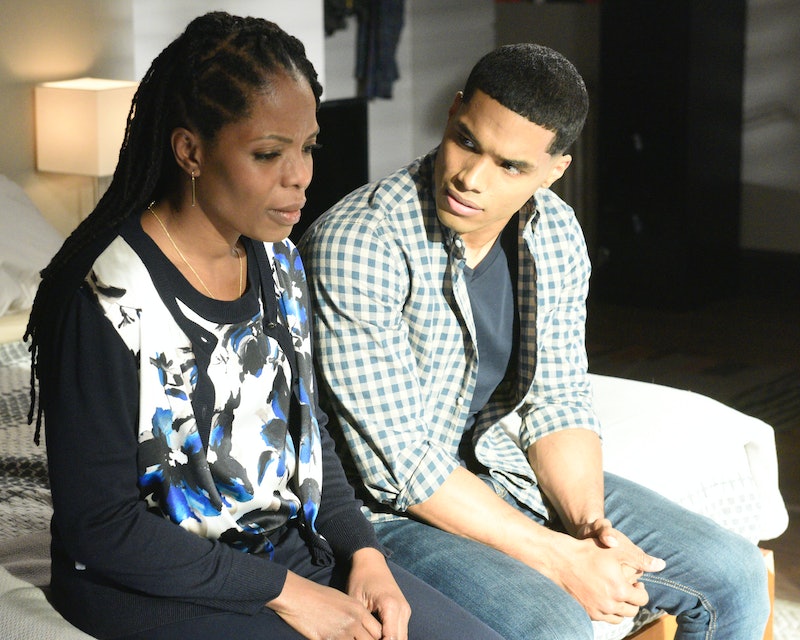 Spoilers ahead for How to Get Away with Murder Season 6, Episode 12. Vivian Maddox returned in HTGAWM's April 16 episode, and it appears she brought some brand new Keating family secrets with her, too. Now that it's been revealed that Gabriel knows who killed Asher — and is the only witness to the crime — Vivian showed up to beg Annalise to protect her son from the FBI. In return, Vivian promised to spill some information that could help Annalise's case, and it has to do with something that happened between Sam and Hannah.

Annalise, of course, wasn't surprised to hear that Sam's sister Hannah is the one who "started the war" against her; Hannah has always had it out for her. But when Vivian asked Annalise if she knows why Hannah hates her and she deadpanned simply that "she's a sad, lonely b*tch who thinks I killed her brother," Vivian realized that Annalise is in the dark about "what happened with her and Sam."

Viewers will have to wait another week to find out what (maybe literal) skeletons are in the Keating siblings' closets, but the episode may have provided a few clues. Until now, Gabriel didn't even know he had an "Aunt Hannah." Vivian's reason for keeping her a secret? "She's not a good person for you to know, baby," she told him, adding that she "ran away from that family for a reason."

Then there was the way Hannah's name even came up in the first place. Gabriel played the recording in which Frank threatened to kill him, and Vivian told her son that Hannah grew up knowing Frank's family. Aside from his lapse of judgement that led to Annalise's miscarriage, Frank has been fiercely loyal to Annalise. If he knew about this secret between Sam and Hannah, he probably would have told her by now. That doesn't necessarily rule out that he may have played a part in it, though.

Given that the April 23 episode is titled "What If Sam Wasn't the Bad Guy This Whole Time?" the evidence seems to point to Hannah actually being more nefarious than her younger brother. Maybe Sam covered for his sister at some point. Or maybe she isn't his sister at all. It very well could be that Hannah was someone Sam was involved with romantically, and the whole "sister" thing was just a cover. Jealousy would be reason enough for Hannah to hate Annalise, and she could have driven Vivian away for the same reason. As Gabriel pointed out, Sam's affair with Annalise was the reason he and Vivian broke up, but she did say that "Hannah was part of it, too."

When confronting Michaela, Connor, and Oliver, still trying to get answers about who really killed Sam, Gabriel mentioned that Hannah doesn't think Wes acted alone in killing Sam. "Hannah's a crazy psycho who knows nothing," Michaela told him. But even she didn't seem so convinced.

Speaking of Wes, his murderer was finally brought to justice when Nate killed Xavier, shockingly snapping his neck. That followed Xavier's confession that Governor Birkhead had ordered the hit that killed his dad, and that she has been behind everything all along, up to and including hiring Agent Pollock to kill Asher in an effort to take down Annalise.

It stands to reason, then, that Hannah and the governor are now working together against Annalise. The only silver lining is that a secret recording of Connor and Michaela admitting the FBI coerced them into ratting on Annalise led the Department of Justice to take the death penalty off the table.

That doesn't mean she cheats death altogether; the entirety of Season 6 has been teasing out who killed her. But whether or not that death is faked or comes much further down the road, at least it won't be via a state-ordered execution. As for what strings Hannah has been pulling behind the scenes, we'll have to stay tuned.